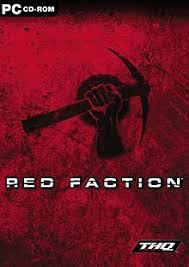 When a gamer hears the name Volition, immediately their mind jumps to the Saints Row or Red Faction series.  In the last decade, the studio has become best known for creating over-the-top, insane open-world games, such as the aforementioned Saints Row games.  Their most recent title, Agents of Mayhem, was a spin-off from said franchise.  Yet, if you look into their history, they've done a lot more than create games where you can beat up civilians with a giant purple dildo.  During the 90's and early 2000's, the studio rose to prominence through the Descent games and the RPG Summoner.  Released in 2001, Red Faction is a first-person-shooter set on Mars, and it follows the efforts of a resistance group trying to stick it to the man.

Parker is an average Joe, not to do different from you or me, who came to Mars to make a better living.  This is far from the case.  The planet is kept under the firm grasp of the Ultor Corporation, who treat their workers like cattle as they work endlessly mining the red planet.  Not helping matters is a disease called the Plague, which is killing off the workers, but Ultor could care less.  Rumors of a resistance known as the Red Faction that's trying to overthrow Ultor gives the people hope.  During his first day in the mines, Parker witnesses the miners trying to fight back, and proceeds to help them.

He's eventually contacted by Eos, the leader of Red Faction, and Gryphon, an undercover agent for the group.  The two want Parker's help to put an end to Ultor's presence and find a cure to stop the Plague from spreading.  His trek across Mars includes kidnapping one of the company's CEO's, and finding Dr. Kapek, who is responsible for the horrible disease.


Red Faction's revolutionist story is nothing special.  It's a basic tale of the working people rising up against their corporate oppressors, and one guy, the reluctant hero, ends up becoming a symbol of hope for others through his actions.  The writing is basic and the acting is sub-par, but the setting of Mars does allow for some unique locations.  Although you spend most of the campaign traversing through similar-looking caverns, you'll also infiltrate high-tech buildings, medical facilities, and underwater caves.  Additionally, the villain, Kapek, is forgettable.  Halfway through the game, he's introduced, as is a sub-plot about how he's experimenting on humans, but after he's killed, this plot point is swiftly swept under the rug.  I give props to Red Faction: Armageddon for attempting to explain more about Kapek and what he was up to, since this game doesn't really do that.

Red Faction features classic, old-school FPS shooting mixed with elements of destructibility.  This game came out during a time when shooters began to put more of an emphasis on story and the stages became more linear and straightforward.  If you're confused by what I mean, play Half Life.  Red Faction adheres to this formula.  Parker is constantly moving from one location to the next, completing whatever objectives Eos or Gryphon gives him.  To fight back the Ultor forces, he will use a large assortment of weaponry.

When the game begins, Parker only has a stun baton, a pistol with crappy accuracy, and some demolition explosives which can be used to blow apart the environment.  Eventually, he acquires a shotgun, an assault rifle, an SMG, a sniper rifle, a rocket launcher, and more.  All firearms have an alternate fire function of some kind, whether it's a silencer for the pistol or being able to fire automatically with the assault rifle.

Although he can blow up stuff, Red Faction is light on the destruction.  The game utilizes the Geo-Mod physics engine, which means the player is capable of blowing apart certain types of the environment, namely the caves.  Geo-Mod destruction comes into play only a handful of times and it comes off as a gimmick more than anything else.  It wouldn't be until the third installment that the true potential of this physics system would be realized.


Parker will face off against a variety of enemies over the course of the campaign.  At first, it's Ultor security guards who don't pose much of a threat.  As you progress through the story, he'll face Kapek's army of mutants and heavily-armed mercenaries employed by Ultor.  When the mercs show up, the difficulty in Red Faction spikes tremendously.  This group of bad guys is equipped with carbine rifles, heavy machine guns, and a special sniper rifle capable of shooting through walls.  Said sniper rifle is an instant death, so you have to play it smart towards the end of the campaign and make sure to save constantly.

Red Faction breaks up the shooting with vehicle sections and stealth segments.  Some of the vehicles Parker pilots include a submarine, a jeep, and a hovercraft, all of which control well.  On the other hand, the stealth parts are the worst parts of the story mode.  In these parts, he has to stealth by security guards and Ultor personnel, and his only mean of defense is the pistol with terrible accuracy.  If you get spotted and someone reaches an alarm, a never-ending horde of enemies is deployed.  There's a right way to do stealth and a wrong way to do it, Red Faction falls into the latter category.

This game came out in 2001 and though the game shows its age, it still looks passable.  Character models are rough and their animations during cut-scenes and gameplay look laughably bad.  Also, as alluded prior, since much of the action takes place in underground caves, many of the locales blend together and aren't very distinguishable.  However, the weapon animations are nice and the destruction physics, though limited, are impressive for their time.  It's a bit satisfying to blow apart a rocky path, causing an APC to fall into the bottomless pit below.  As for sound, its average, with the only stand-out element being the music.  The electronic score is well-done and heightens the action when necessary.


Red Faction isn't perfect by any means.  The story is paper-thin and the characters disposable, but the gameplay is a nice time capsule of where the first-person shooter genre was at the time and where it was starting to go.  The varied weapon selection and campaign help keep the action from getting tedious.  Sure, the stealth sequences are bad, but there's only two of them, so the punishment isn't too grueling.  For those interested in Volition's history prior to Saints Row, Red Faction is an interesting showcase of where the company was at the time.