Only on Wii: Destroy All Humans Retrospective Part 3 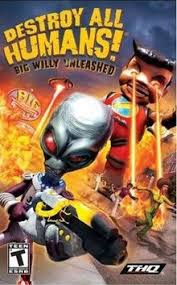 After the release of Destroy All Humans 2, the series went through a bit of a shake-up.  Pandemic, the studio responsible for the first two games, was purchased by EA in 2007.  This did not deter publisher THQ, who commissioned Cranky Pants Games to work on the next installment, Path of the Furon.  To tide fans waiting for Crypto's next generation debut, THQ released Destroy All Humans: Big Willy Unleashed in 2008.  The game, set between 2 and Path of the Furon, was developed by Locomotive Games, who previously worked on Road Rash 64 and WWE Crush Hour.

Big Willy Unleashed was released on the Wii and to date is the only entry in the series exclusive to one console.  PlayStation Portable and PlayStation 2 ports were in development but got cancelled due to a lack of funding and controller issues. THQ closed Locomotive Games later in 2008, so this marks the last game they developed, although the studio was planning a Red Faction game for theWii codenamed Red Faction: B.E.A.S.T. before their closure.  Big Willy Unleashed is regarded as the black sheep by fans of the series, but does it deserve to be given such a claim to fame?

Since the events of Destroy All Humans 2, Crypto abandoned running America and has been lying low with Pox for a few years.  One day, while watching television, a revolutionist named Patty Wurst hijacks the signal to warn people of Big Willy's, a chain of restaurants owned by Pox.  She claims the restaurant grinds corpses into hot dog meat and plans to expose the restaurant's secret.  Confused by what's going on, Pox tells Crypto he's been taking the bodies of everyone Crypto has killed and converting them into meat.  Pox doesn't want Patty Wurst to reveal the truth and sends Crypto out to kill her.  As it turns out, though, Wurst is working for Colonel Kluckin', owner of Kluckin's Kitchen, a rival restaurant.  Kluckin' intends to reveal to people what's really going on behind the scenes at Big Willy's, which Pox isn't going to stand for.

Big Willy Unleashed's story is a hodge-podge tale of fast-food rivalries, obvious allusions to Soylent Green, and a plethora of jokes centered around the name "Big Willy." The set-up and conflict of this game lacks any real threat and is lame.  Maybe it's because instead of having a group of restaurants work together to expose Big Willy's a'la Majestic, it's just faux-Colonel Sanders who's after Crypto and Pox.  Also, considering this is a story about humans being ground up into meat people eat, where is the spoof of the Texas Chainsaw Massacre?  Instead, we get a parody of Fantasy Island, but this time it's an atoll.

Besides the missed opportunities for interesting and funny scenarios, the writing isn't as strong as it was in the first two games and relies on a lot of obvious references to pop culture from the 1970's, like the aforementioned Fantasy Island parody, but the boatload of Big Willy puns and fourth-wall breaking humor can be quite hilarious.  To some, the double-entendres come off as hokey and uninspired, but given the game's lack of shame in how frequently they're delivered, I like them.  Crypto and Pox frequently acknowledge this is a game and poke fun at various tropes, such as how bodies disappear when Crypto goes around the corner, or how people he gets assigned to kill in one side missions are given unnecessary backstories to provide some sort of motivation for the player.

Although the series is in the hands of a different developer and on a system with a unique controller, Destroy All Humans: Big Willy Unleashed does a competent job at translating the series' trademark gameplay for the Wii.  Developer Locomotive Games came up with a control scheme that effectively mimics the dual-analog set-up of an Xbox or PlayStation controller.  Aiming Crypto's guns and mental powers and turning the camera functions similarly to first-person-shooters on the Wii like Goldeneye 007 or Metroid Prime 3, and multiple options allow gamers to decide how much aiming sensitivity and turn speed there is.

Also, motion controls are kept to a minimum.  For example, throwing people or objects with PK is done by flicking the remote, and to turn the saucer and increase/decrease its altitude, you twist the remote or tilt it up and down respectively.  Big Willy Unleashed is an instance where developers other than Nintendo utilize motion controls in a way that's simple, intuitive, and not unobtrusive.

Crypto and Pox's quest to stop Kluckin takes them to four locations across the world, including Harbor City, Fairfield, Fantasy Atoll, and Vietmahl.  When you're not protecting Big Willy's big secret, you can run around, cause mayhem, and find energy cells to upgrade Crypto's equipment, more on this later.  All of the weapons introduced in Destroy All Humans 2 don't return, but series mainstays the zap-o-matic, disintegrator ray, ion detonator, and the anal probe are available to use.  New guns include the ball lightning, which fires balls of electricity that zap anything in sight, the zombie gun, which turns people into the walking dead, and the shrink ray, which is an end-game reward.

Crypto still has the saucer, which comes with the death ray, sonic boom, quantum deconstructor, and a new weapon, the electro-cone.  The electro-cone generates a swarm of lightning around the saucer that zaps anything and everything in its vicinity, similar to the ball lightning.  The saucer isn't the only vehicle everyone's favorite homicidal alien gets too use, as he also gets to control the Big Willy mech.  This 25-foot-tall robot is armed with laser-shooting eyes, acidic vomit, and farts capable of leveling city blocks.  He's also indestructible and can wield objects and vehicles like giant clubs.  However, the Big Willy runs on a battery that drains over time or whenever you use the mech's weapons.  If it runs dry, Crypto is ejected and must recharge it via the zap-o-matic or ball lightning, but by grabbing people and popping their brains out, you can keep his battery running.

Upgrading Crypto's arsenal and mental powers is handled differently here.  Each upgrade requires the player to fulfill a certain number of requirements to upgrade anything.  This can involve either collecting a certain number of energy cells or brain stems or using a particular ability or gun X amount of times.  Once everything's been fulfilled, upgrades are automatically applied.  This upgrading system is neat since it requires gamers to make the most of what Crypto has, and the way it functions is reminiscent of the perks tree from the recent Wolfenstein games.

At first glance, the game sounds like it should be a compelling time that offers players more of what to expect from the Destroy All Humans series, and it does.  Terrorizing humans on-foot or in one of the new vehicles never gets old, but the missions available to complete are boring and simplistic.  Each mission involves doing things such as infiltrate secret meetings, assassinate targets of interest, or cause destruction.  This is nothing new for the franchise, but it comes off as stale here.  A lot of it has to do with the poor graphics and mediocre AI.  Every once in a while, a mission comes along that's fun enough, but they're buried beneath dozens of tedious ones.

For example, the final mission in Fairfield sees Crypto destroying the entire town, save for the restaurant, and you use either the saucer or the Big Willy mech to do so.  As the chaos progresses, the alert level raises and more reinforcements are called in, making things quite hectic, to say the least.  Speaking of which, though its name is in the title, the Big Willy mech isn't put to much use during the story and is used only in a handful of missions.  Environments are also smaller in contrast to the levels of the previous games, making the act of destroying a city a quick and easy process.

Quick and easy is the best way to summarize this game.  Destroy All Humans: Big Willy Unleashed is criminally short, taking anywhere from four to five hours to beat, plus an extra hour or so to finish off the remaining side missions and find any energy cells you missed.  The original Destroy All Humans is a short game as well, but the missions were fun, something Big Willy Unleashed lacks.  A multiplayer mode is available, but it's an afterthought, consisting of nothing but a handful of competitive and cooperative minigames.

Destroy All Humans: Big Willy Unleashed looks great... if it had been released in 2001.  As a Wii game released in 2008, though, it looks bad.  Textures are bland, most of the character models, except for Crypto and Pox, are low-res models who look like they have aluminum foil wrapped around their faces, and the draw distance is ridiculously short.  Everything in the world, save for the buildings, fades in and out of existence constantly.  Worst of all, none of the characters' mouths move during cut-scenes and conversations.  Instead, they gesture and wobble their bodies while the camera stays behind their head to give off the illusion someone is talking.

Such technical shortcomings might be excusable on the PSP or PS2, but on Wii, it's not.  Although the Wii was a low-powered system, the console was capable of good graphics when developers made creative use of the hardware's limitations.  It really says something when the prior games released for older consoles in 2005 and 2006 respectively look leagues better than this game.

Sound is a mixed bag.  Instead of being voiced by series regulars Grant Albrecht and Richard Horvitz, Crypto and Pox are played by sound-alikes who try to sound similar to the original actors, but you can tell they're just impersonations.  The rest of the voice-acting ranges from decent to average, but the music is good.  The problem is instead of having a new score, all of the music, including most of the licensed tracks, are ripped straight from the next game in the series, Destroy All Humans: Path of the Furon.

Destroy All Humans: Big Willy Unleashed is a serviceable but ultimately underwhelming game.  The story, though self-aware and very tongue-in-cheek, isn't interesting due to the subject matter.  This is a tale about rival fast-food chains, so everything in the plot feels small-scale compared to what happens in the previous games and even in the next installment.  As for the gameplay, Locomotive Games did a good job at translating the series' gameplay and controls to the Wii.  Using the Wii remote and nunchuck to kill humans and knock down buildings works well, and the gameplay is classic Destroy All Humans, except for the missions.  They're boring, unexciting, and are so short you can beat this game in an afternoon.

This could have been a decent installment and it offers some fun, especially with the new vehicle, but the whole package feels rushed and it needed more time in the oven for everything to reach its true potential.  In the end, playing with your Big Willy only gets you so far before you want to do something better with your time.

PART 2: https://thelairofgamerguy.blogspot.com/2018/12/make-war-not-love-destroy-all-humans.html
Posted by William Lowery at 8:53 AM