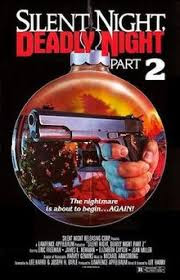 What happens when you a have film that releases to immediate controversy, so it's pulled from theaters?  Make a sequel, of course!  1984's Silent Night, Deadly Night followed Billy Caldwell, a boy who snaps and goes on a Yuletide killing spree due to memories of his dead parents and the constant abuse growing up from a nun named Mother Superior.  At the end of the film, right before Billy plants an axe into her skull, he's shot by the police.  His younger brother Ricky witnesses his brother's demise, before looking up at the sinister nun and uttering, "Naughty."  A follow-up involving the lesser Caldwell wasn't a bad idea, but after the backlash the first one received, how do you create a sequel without the soccer moms and film critics getting out their pitchforks?

Three years after the original's debut, producer Lawrence Applebaum got the rights to the film and intended to either re-release it in theaters in an edited format or use the footage and re-work it into an entirely different film.  Lee Harry, an editor known for assembling trailers, decided instead of creating a condensed version of the 1984 picture, he was going to take the footage and add in new scenes following a grown-up Ricky Caldwell.  The result was 1987's Silent Night, Deadly Night Part 2, which became a cult classic thanks to one scene and the actor who delivered it.

On Christmas Eve, Ricky Caldwell is locked up at a mental institution after going on a killing spree the day prior.  A psychiatrist is brought in to question him about his life and how he ended up where he currently is.  For the first forty minutes, Ricky recaps the events of the first one, including moments where he wasn't present, and after wrapping up the story of Billy's psychotic breakdown, he tells the doctor what he's been up to.  The orphanage was closed down, but Ricky got adopted.  Similar to his deceased brother, he occasionally experiences PTSD related to his parents and sibling's death, but nowhere near as much as Billy did.

As he got older, he saved a woman from assault, killed a douchebag loan shark, and fell in love with a woman named Jennifer.  Things are going good for him until the two are out for a walk when they encounter Jennifer's ex, Chip.  Chip's aggressive behavior triggers Ricky, who proceeds to kill him and Jennifer.  When a rent-a-cop tries to stop him, he steals the gun, kills the officer, and begins to shoot anyone and everyone he sees, including those taking out their trash.  Fortunately, the cops arrest Ricky, and his story comes to a close, or so it seems.  During the interrogation, Ricky strangled the psychiatrist, and after wrapping his story up, he escapes.  Ricky then steals a Santa suit before making his way to Mother Superior, who resides in an elderly home, so he can finish the job his brother started.
Silent Night, Deadly Night Part 2 is a bizarre sequel.  One half is an abridged recap of the first, while the other half is new material focused on Ricky, and though the film isn't good, objectively speaking, it's really entertaining.  Those who watched the original will feel cheated by the recycled footage that takes up the first half, but director Lee Harry does a good job at summarizing what happened in the previous entry, so newcomers could skip the original, watch this, and still get the gist of what's going on.  Once Ricky delves into his life after Billy's death, the movie picks up steam.

Eric Freeman is amazing as Ricky Caldwell, but not amazing in the traditional sense.  His wild-eyed, manic acting is a delight to watch, and there is not a single moment where Freeman chews the scenery, if only because of a lack of proper direction due to the tight schedule.  Imagine William Shatner, but cranked up to eleven, and that's his performance in a nutshell.  Is it ham-fisted?  Yes, but by God is it hilarious.  Eric Freeman's acting makes this picture a sight to behold, and without him, chances are it would not have the cult-classic status it has today, nor would it have spawned one of the greatest memes ever.

Also, I have to give Lee Harry and company props for how much they managed to pull off with such a restricted schedule and budget.  Watching the second half of the movie, you wish the filmmakers had been able to make Ricky's story into its own, fleshed-out sequel because the fact it doubles as Silent Night, Deadly Night abridged is a bit of a caveat.  Yet, Ricky's rampage might be more entertaining than Billy's, if not for the over-the-top acting and ridiculous kills.

When Ricky isn't flexing his eyebrows, he's murdering those he deems naughty in some of the funniest and inventive ways known to mankind.  Thought the deer head impalement from the first was crazy, wait until you see Ricky shove an umbrella through a loan shark so hard it pops open on the other side!  We also learn he doesn't take kind to annoying movie-goers, as evidenced by a scene in the world's smallest theater where him and his girlfriend go to see a movie, ironically, about a killer dressed as Santa.  As the annoying movie-goer's antics get more obnoxious, Ricky sneaks his way over to where he's sitting and beats the hell out of him.

No review of Silent Night, Deadly Night Part 2 would be complete without a discussion of the film's most legendary moment.  While roaming the neighborhood with his newly-acquired revolver, Ricky shoots a man taking out the trash, and right before he murders the poor soul, he shouts, "GARBAGE DAY!" and pops a round into him.  This scene elevated the movie beyond being just a sequel to a controversial slasher and into the annals of history.  Chances are you've seen the "Garbage Day" clip on YouTube or as a GIF someone puts in a post on social media.  Only Eric Freeman and his amazing eyebrows could pull off a performance like he did.

Though produced on a shoe-string budget of $100,000, the movie sports some decent effects.  There's the previously-mentioned umbrella kill, but another great moment is when Ricky electrocutes Jennifer's ex to death using cables hooked up to a car battery, complete with eye explosions!  On the other hand, the soundtrack is forgettable, and is severely lacking in "Warm Side of the Door."

As an acne-riddled teenager growing up, I was familiar with Silent Night, Deadly Night Part 2 through the "Garbage Day" scene, but I, like many others, knew nothing about where it came from.  In preparation for this review, I picked up Scream Factory's blu-ray of the sequel in the hopes to learn more about the making of this production, not to mention finally experience what everyone was talking about.  What I learned from the various interviews was that the filmmakers tried to do something beyond a simple cash grab, and with what they were given, they produced the best possible results.

Ironically, Eric Freeman had no idea a film he was in thirty years ago had become a cult classic until a few years ago.  I don't know if Freeman himself will ever read this review, but I will say he gave it his best shot, and it paid off for him in the long run.  Without Freeman's performance, chances are Silent Night, Deadly Night Part 2 would have been disregarded amongst the other sequels in the series.  Instead, we have one of the greatest "so bad, it's good" films ever created.  Like Plan 9 from Outer Space, The Room, or Troll 2, it's a movie that has to be seen to be believed. 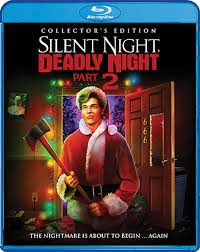 Last week, Scream Factory released a special edition blu-ray for Silent Night, Deadly Night Part 2, and like all other Scream Factory releases, it comes packed with a new transfer of the movie and a host of extras dedicated to the movie's production.  The 2K transfer sports noticeable grain, but not to the point it ruins the viewing experience.  On the other hand, the extras are impressive.  The stand-out featurette is Slay Bells Ring Again: The Story of Silent Night, Deadly Night Part 2, which is an hour and fourteen minutes long and delves into the production of the movie.  As noted earlier, when Lee Harry was given the task of re-editing the first installment, he decided to take the existing footage and work it into a sequel featuring new scenes following Ricky.

Before Eric Freeman was cast, the producers considered another individual who gave a more methodical, creepy performance during the audition.  Freeman was auditioning for a smaller part, but when he asked it the lead had been cast, Lee Harry decided to give the part of Ricky to him instead of the other guy.  The people interviewed also note part of the reason for the strict shoot was because of producer Lawrence Applebaum, who wanted them to push through production as quick as possible; because of this, the actors were only allowed one-to-two takes per shot.

Other extras on the blu-ray include an hour-long interview with the head of make-up effects, Christopher Biggs, who talks about his career before and after Silent Night, Deadly Night Part 2, a location tour, as well as Ricky Today, a short film where Eric Freeman reprises his iconic role Ricky Caldwell, who's interviewed in a mental asylum about the movie and how true it is to what he actually did.  He mentions he wrote a script called Ricky Unhinged, which based off a real-life script Eric Freeman came up with that he hopes to get made into a movie one day.  Additionally, there are two audio commentaries, one old and the other new, plus a trailer for the movie and the upcoming documentary Finding Freeman.

In short, this blu-ray is a great way to experience the cult classic, even if the picture quality leaves a little to be desired.