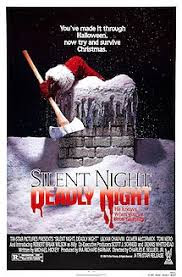 "He sees you when you're sleeping.  He knows when you're awake.  He knows when you've been bad or good, so be good for goodness sake!"  Is this a song about Santa Claus or a deranged serial killer who punishes those he deems naughty?  In 1978, John Carpenter released Halloween, which popularized the slasher genre.  The most interesting aspect of the movie is its usage of the holiday, since Michael Myers stalks his victims on Halloween night and wears a costume that lets him easily blend in with the hordes of trick or treaters out and about.  The success of Halloween resulted in studios trying to cash in on the popularity of the film via their own slashers, many of which were set during various holidays.

Billy Caldwell and his baby brother Ricky are traveling with their mom and dad on Christmas Eve to see their grandfather, who resides at a mental institution.  The grandfather has been in a catatonic state for a long time, but when the parents leave Billy with him to chat with the doctors, it turns out the grandfather has been tricking them this whole time.  He warns Billy that if he's been a naughty boy, Santa Claus is going to punish him, which rightfully scares the little boy.

While driving home from the mental hospital, they notice a broken-down car and its occupant, a man dressed as Santa.  He's signaling for help, but it's a ruse, as he's really a criminal.  He shoots at the car, killing the father, and though Billy manages to escape and hide, baby Ricky is left screaming, and the mother gets captured and assaulted by the crook, before he kills her.  Years later, the Caldwell brothers now live in an orphanage ran by the strict Mother Superior.  Billy suffers from PTSD because of the incident, and though one of the nuns believes he needs help, Mother Superior thinks punishment will keep him in line.  After suffering years of abuse at the hands of Mother Superior, Billy, now a teenager, is given a job at the local toy store.

At first, things are going good for Billy, but then Christmas rolls around, and the nightmares return.  Not helping matters is when the boss needs him to dress up as Santa, which only worsens his state.  Things reach a boiling point when Billy notice a co-worker getting raped by a male employee in the back of the store during a Christmas party.  He snaps, kills the rapist, the victim, the boss, and his wife before setting out, axe in hand, to punish the naughty.

What sets Silent Night, Deadly Night apart from other slashers coming out around this period is its devotion to exploring how the killer came to be who he is.  Normally, slasher films focus on the victims and developing their characters before the bloodshed occurs.  Here, they twist the formula up.  It isn't until about fifty minutes into the movie Billy snaps and starts killing, and whereas killers such as Michael Myers of Jason Voorhees aren't sympathetic, Billy is.  He had a terrible childhood and is plagued by flashbacks to the horrific murder of his parents, not helping matters was Mother Superior's strict punishing.  Aside from one of the nuns and Ricky, nearly everyone else is an asshole, which only adds fuel to his fire.

When the killings start, the movie becomes a fun, if predictable, thrill-ride.  Silent Night, Deadly Night adheres to its holiday setting.  The images of Christmas decorations, nutcrackers, falling snow, and cheery holiday music contrast nicely with the axe-wielding billy going around and murdering people.  Plus, his costume of choice makes it hard for the police to track him down, since there are dozens of other individuals in this town wearing the same outfit.  There are a couple of false alarms in the second half where the audience thinks the cops have found Billy, but it turns out to be someone else.  Like Gremlins, Silent Night, Deadly Night takes a holiday people love and turns it on his head, with enjoyable results.

If Billy is the hero, then Mother Superior is the villain.  Imagine Nurse Ratched from One Flew Over the Cuckoo's Nest, but she's a nun, and this is the character in a nutshell.  She's a strong believer of the Catholic religion and is a major reason for Billy's psychological breakdown later on.  Ironically, the filmmakers thought they would get in trouble for the Mother Superior character and the portrayal of Catholicism, instead of the guy dressed up as Santa.  As the film progresses, you root for Billy to find his way back to the orphanage so he can get revenge on the wicked woman, but things don't turn out as planned.

However, the rest of the cast is nothing special, and in many cases, are complete jerks.  Silent Night, Deadly Night's biggest problem is it takes itself a bit too seriously.  Given the subject matter, it's understandable, but the first half of the picture has this noticeably mean-spirited tone, which is a stark contrast to the second half, where Billy is running around yelling "Naughty!" or "Punish!" while lobbing off teenagers' heads with his axe.  There's also an incredibly cheesy montage showing Billy being a good employee at the toy store, complete with a cheery ballad called "Warm Side of the Door."

Of course, the big question regarding the film is did it really deserve all the backlash when it first came out?  No.  Looking into the history of the controversy, most of it is pretty outrageous.  After all, this movie came out the same year as Gremlins, another Christmas-themed movie where little monsters terrorize a small town during Christmas, and in one scene, they attack a man dressed as Santa.  It shows a lot of these people lacked something called common sense.  When ads were being shown on television, instead of telling kids it's just a movie, they figured protesting was the right solution.  Nowadays, the backlash is ridiculous as the film itself is harmless, as harmless as a movie about a man dressed as Santa murdering anyone can get.

This is a slasher movie, and what is a slasher movie without some bloodshed?  Fortunately, the kills in Silent Night, Deadly Night are a delight to watch.  One of my personal favorites is when Billy breaks into a home where a young couple is in the middle of sex.  First, when he finds the woman, played by Linnaea Quigley, he grabs her and impales her on deer antlers hanging on a wall.  As for the boyfriend, Billy chucks him through a nearby window and sends him flying to his death.  Another highlight is when a pair of bullies steal some sleds to do some late-night shredding.  When the second bully slides down the slope, Billy pops up and lobs his head clean off.

Silent Night, Deadly Night is nowhere near as infamous as the soccer moms nor Siskel and Ebert made it out to be.  In actuality, it's an enjoyable but by-the-numbers slasher with an interesting lead character.  It's not every day you empathize with the one committing the killings, but there's more to Billy than his costume and axe.  Granted, the tragic backstory results in some tonal inconsistencies, but those looking for a little Yuletide havoc will enjoy the film for what it is.