One Giant Step on Mankind: Destroy All Humans Retrospective Part One 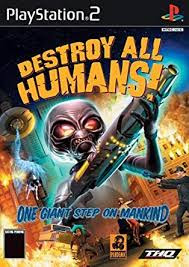 Pandemic Studios, it's a name relevant with many titles, including Mercenaries: Playground of Destruction, Star Wars: Battlefront, The Saboteur, and Army Men: RTS.  Although the studio is no longer around, the games they created, many of which are regarded as classics, shall not be forgotten.  In 2003, Pandemic began work on Destroy All Humans, a game whose concept came from the mind of Matt Harding, the man responsible for the "Where the Hell is Matt?" videos.  He suggested the idea merely as a joke after a game he was working on called Oddballs was rejected by Microsoft.  Little did Harding know that this joke would spawn a cult-classic franchise.

On a planet in the Proxima Centauri system, a race of aliens known as Furons have a problem.  For centuries, their kind has had to use cloning to keep their species alive since frequent use of dangerous weaponry resulted in the loss of genitalia.  A Furon scout named Cryptosporidium was sent to Earth by Orthopox 13 to survey the planet but has not responded.  Fearing the worst, Pox decides to launch his plan to invade Earth and harvest humans.  The reason is because locked away in all humans is a strand of pure Furon DNA, the result of when Furons came to Earth after fighting the Martians to let off some steam.  Pox order Crypto 137 to destroy all humans, harvest their brains, and figure out what happened to Crypto's predecessor.

What sets Destroy All Humans apart from other science-fiction titles is its set-up and sense of humor.  In most media, aliens are portrayed as bad guys looking to conquer Earth and nothing more, but in this game, Pox and Crypto invade the planet for the survival of theirs.  Destroy All Humans lampoons both science-fiction and the decade it's set in, the 1950's.  At the time, the idea of Communism and being invaded by the Red Menace was a public fear, thanks in part to Joseph McCarthy and his Communism paranoia.  Nearly every human who sees Crypto, be it in-game or during a cut-scene, calls him a Communist even though he's clearly an alien.

In addition to satirizing cultural trends at the time, Destroy All Humans is something of a love-letter to 50's science-fiction movies.  The music, with its strong use of Theremin, calls to mind movies from the decade like The Day the Earth Stood Still and War of the Worlds.  Heck, one of the missions involves hijacking a screening of Plan 9 from Outer Space at the local drive-in to play a short film designed to brainwash humans.  For fans of cinema from this decade, they'll get a kick out of all the nods peppered throughout this game.

Destroy All Humans also features two of the most underrated protagonists in gaming history, Crypto and Pox.  Granted, called them protagonists is a bit of a stretch, given Pox's diabolical schemes and Crypto's anarchic behavior, but the dialogue between them is excellent.  Pox is intellectual yet calculating, always coming up with new plans to manipulate the masses in order to get more brain stems.  On the other hand, Crypto is in for the destruction.  He does what he's told, but he'd rather destroy humanity rather than try to research it.  Plus, his faux-Jack Nicholson voice is iconic, to say the least.

Destroy All Humans is an open-world game, sort of.  The environments are big, explorable, and can be blown up, but mission progression is linear.  Instead of accepting missions and whatnot in the levels themselves, the mothership is where you'll go to continue the story and buy upgrades from Pox.  Regardless, the name of the game is Destroy All Humans, and destroying is what you'll do, most of the time.  Crypto is equipped with a multitude of mental powers and high-tech weapons.  His mental abilities include psychokinesis, mind-reading, hypnotize, and the holo-bob.

Psychokinesis lets you levitate humans, cars, and tanks with Crypto's mind.  Initially, you are only capable of picking up and hurling humans and small objects, but by purchasing upgrades you'll be able to pick up vehicles and other large items.  Mind-reading allows you to read minds, go figure.  Generally, a person's though is comedic, but there are occasions where you'll have to scan individuals for a clue he or she might have.  Hypnotize is used to distract humans or lure them to a destination if the objective calls for it.  Finally, the holo-bob projects a disguise, allowing Crypto to blend in with the crowd.  He can't use his weapons, but he can use his other mental powers.

Using mental abilities drains the concentration meter.  If it runs out, then it'll have to briefly recharge, but you can quickly refill the meter through mind-reading.  There are over twenty missions, a few of which require Crypto to stay in disguise, or else it's an instant mission failure.  Staying in disguise and trying to keep the concentration meter filled up during these parts is tedious, especially since a special enemy type will disable the holo-bob if Crypto gets too close.  Luckily, these missions are few and far between.

Crypto's arsenal includes the zap-o-matic, the disintegrator ray, the ion detonator, and the greatest weapon ever, the anal probe.  The zap-o-matic fires bolts of electricity which, when upgraded, can chain together multiple humans.  The disintegrator ray fires balls of hot plasma which vaporize anything that gets in their way, plus it can destroy vehicles, something the zap-o-matic is not capable of, even when fully upgraded.  The ion detonator is a high-tech grenade launcher.  Holding down the fire button increases how far the ion bomb will be thrown upon release, and after its fired, you can press the fire button again to detonate it, or let it explode on its own.

As Crypto destroys more and more humans and property, the law enforcement shows up.  The game uses an alert system similar to the one in Grand Theft Auto.  First, cops show up, followed by the military, and then the Majestic.  Majestic, run by the enigmatic Silhouette, is the bad guy of the game.  Majestic agents are equipped with a ray-gun pistol or a shotgun-like device capable of taking out large portions of Crypto's health.  When the situation calls for it, the player will take to the skies in a flying saucer to create even more destruction.

Crypto's saucer is fixed to one height, so you can't change altitude, but what you can do is level city blocks using a destructive roster of weapons.  The death ray is a continuous stream of energy that damages buildings and vaporizes vehicles and humans.  The sonic boom launches spheres which emit shockwaves that send things flying, and the quantum deconstructor is a mini-nuke capable of annihilating anything within its vicinity.  There's also an abduction beam, but it acts more like a winch since it flails things around, including humans, instead of actually abducting them.  Weapons including the sonic boom, quantum deconstructor, and disintegrator ray take up ammo.  Ammunition for the on-foot guns is found lying around the environment, but ammo for the saucer's weapons is obtained by destroying buildings, which is also where pick-ups to restore the saucer's health are hidden as well.

Upgrading Crypto's weapons and abilities is done via the mothership.  Brains act as currency and are obtained either by using the anal probe or the Extract ability.  Hidden in each area are probes worth up to 75 DNA, and many of them are in well-hidden spots that often require the player to venture out into remote areas of the map to find them.  Collecting all of the probes for each area unlocks concept art mini-movies to view in the mothership.  Strangely, there are no upgrades for Crypto or the saucer's shield, nor are there any pertaining to Crypto's jetpack.  This is an odd design choice considering later locales such as Area 42 and Capitol City pit you against soldiers, Majestic agents, and tesla coils capable of turning the saucer into a scrapheap.

Although immensely entertaining, conquering America in Destroy All Humans isn't a time-consuming experience.  With only twenty missions to complete, beating the game takes anywhere from four to five hours.  However, a multitude of extras await after one beats the game.  These extras delve into the making of this game and are a delight to watch.  One of my personal favorites is where members of the development team go through the different builds of Destroy All Humans while talking about what was changed or removed over the course of development.

Visually, the game is a bit hit-and-miss.  The character models, especially Crypto, look good, even though environments copy and paste a handful of pedestrian models over and over, and the visual effects for building destruction and the weapons are awesome.  Yet, the draw distance is noticeably short, and on the PlayStation 4, the game suffers from crashing, which occurred not once, but three times during my playthrough.  Also, the physics are extremely broken.  Humans will skip and bounce across the ground if you knock them over with PK, and it's even possible for them to clip through the world if you push them through a fence.

Voice acting is very good, with the standout performances being Crypto and Pox.  Crypto is voiced by Grant Albrecht, whom gamers might recognize as the voice of The End in Metal Gear Solid 3 and Death Metal in No More Heroes, and the alien's faux-Jack Nicholson voice fits perfectly with the character's short, aggressive temper.  Pox is voiced by Richard Horvitz, who's basically reprising his role as Zim from Invader Zim, which is by no means a bad thing.  The rest of the cast is solid, and all of the performances are backed up by hilarious writing.  The true star of the sound, though, is the music.  As stated earlier, the score is heavily inspired by '50's science-fiction films, and it's great.