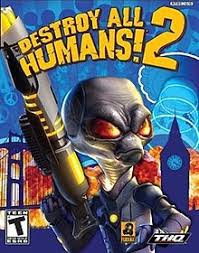 When Destroy All Humans released in 2005, it proved to be a moderate success for publisher THQ and developer Pandemic Studios.  Considering the first game ended with Crypto 137 running the country disguised as the current president of the United States, a sequel seemed inevitable.  One year later, Destroy All Humans 2 came out on the PlayStation 2 and Xbox.  Like Borderlands 2 and Batman: Arkham City, Destroy All Humans 2 is one of those sequels which improves upon what made the original great by fixing some design problems and adding a bevy of new content.  Plus, with the follow-up being set in the 1960's, it means we can do something many of us probably dreamed of doing: probe and vaporize hippies.

Ten years have passed since the events of the original.  During this time, Crypto 137 died and was replaced by Cryptosporidium 138, who resumed his predecessor's job of running America.  However, this clone contains something Crypto 137 nor did any other Furons have, actual genitalia.  While Crypto 138 parties it up disguised as the President, Pox runs experiments back on the mothership.  Little do the two know that their activity is being monitored by the KGB, who are aware of what the Furons are doing here on Earth. To prevent the Furon race from fully regaining the ability to procreate, the Russians launch a missile at the mothership, killing Pox.

In Bay City, Crypto is partying with hippies when the explosion occurs.  He's ambushed by KGB agents and survives the surprise attack.  Crypto manages to find Pox, who downloaded his consciousness into a hologram moments before the missile hit.  With their mission in jeopardy, Crypto and Pox need to figure out why and how the Russians found out about their mission.  Their journey takes them across the globe and even onto the moon, where they discover there might be more to the Russians' scheme than meets the eye.

Destroy All Humans 2's story and writing carries on the tradition of spoofing science-fiction, but with a new decade comes a new source of comedic material.  Besides offering plenty of jokes aimed at the hippie culture, the sequel pokes fun at spy movies and shows from the era such as James Bond and The Man from U.N.C.L.E., right down to a parody of MI6 called M16, which is an anagram for the sixteenth sector of Majestic.  Crypto even gets his own Bond girl in the form of Natalya, a KGB agent gone rogue who helps Crypto and Pox thwart whatever it is the Russians are planning.

Yes, our favorite genocidal, Jack Nicholson-sounding alien has a love interest, which sounds like Crypto has lost his edge, but he hasn't.  He still thinks less of humans and will gladly demolish a city when given the chance, but Crypto's new "package," not to mention his time on Earth, has caused him to become more accustomed to our culture.  As for Natalya, he initially brushes her aside and considers her assistance only temporary, but as the game progresses, his libido gets the better of him, making Crypto equal parts horny and homicidal.  Don't worry, this is still Destroy All Humans, not Love All Humans.

In comparison to the original, the narrative is more large-scale.  Crypto and Pox encounter a slew of new characters in places based off real-life cities like San Francisco, London, Tokyo, and Yugoslavia.  They'll run into secret agents, ninja clans, hippie gurus, and face off against an old enemy of the Furons.  The writing and comedy remain top-notch, and the added conversation system helps explain how things have changed since the first game, in addition to furthering the world the series has established.

Instead of being a weird mish-mash of linear mission progression and open-world gameplay, the sequel is a full-on sandbox experience, complete with story and side missions, collectibles, and an endless supply of humans to terrorize and buildings to level.  Plus, certain design choices from the original are tweaked and modified to create a more well-rounded and thrilling gameplay experience.  With no mothership to return to after each mission, the saucer now acts as the base of operations.  In Destroy All Humans, the saucer always stayed at one of a handful of landing zones in a level, and you could not summon it to where another landing zone might be.  Introduced in this game is Arkvoodle, a Furon god with statues of his visage strewn about each area.  Interacting with each statue triggers a small task that needs to be completed, and when it is, Crypto is able to summon the saucer to the new landing area.

At the saucer, gamers may upgrade Crypto and the saucer's equipment, including the shield and jetpack, as well as mental abilities.  Instead of collecting brains to buy upgrades, there are energy cells.  Energy cells are obtained by completing missions or finding them scattered across the map.  Unlike the probes in the original, these are easy to find, as are artifacts, which unlock extras to view in the pause menu.  To upgrade Crypto's mental powers, you need to abduct people using the saucer's abduction beam and process them through the gene blender.  All of his powers from the first game return, including PK, hypnotize, mind-reading, and the holo-bob, which is replaced with body-snatch.

Next, the burrow beast is obtained by completing a side-story involving the formation of a cult dedicated to Arkvoodle.  A lure fires out of the gun, which attracts a vicious underground creature that eats anything near the lure; in other words, it's like owning your own graboid from Tremors.  Finally, there's Gastro, my personal favorite since it's essentially a deployable turret piloted by the hologram of a smack-talking Furon who was formerly the mothership's janitor before it got blown up.

As for the saucer, it comes with the death ray, sonic boom, quantum deconstructor, and the newly added anti-gravity field.  The anti-gravity field is a void of negative energy fired from the saucer that makes everything in its vicinity float in mid-air before the field implodes.  Also, the saucer is now capable of moving up and down, making it a lot easier to dodge tank fire.  Obtaining new weapons is done by finding datacores, which are normally found during or after a mission.  Additionally, obtaining ammo for Crypto and the saucer's weapons is done through a new ability called transmogrify, which converts objects and vehicles into ammunition.

Of course, delivering death and destruction draws the attention of the law, and the wanted system has been revamped to be more reminiscent of the one seen in Grand Theft Auto.  First, cops with pistols show up, followed by cops armed with pistols and shotguns, then the military arrives, and on the highest alert level, martial law is declared, and city streets are dominated by patrolling soldiers and tanks.  A neat twist is that each locale has its own enemy faction exclusive to said place.  For example, in Takoshima, there are rival ninja and Yakuza clans, while in Tunguska, there are no cops, only soldiers and KGB agents.  To lower the alert level, you can use mind flash when it's available or snatch a cop or soldier and use a nearby phone booth to call off the current alert level.


Destroy All Humans 2 embraces the open-world formula and is a much better experience because of it.  The mechanics will be familiar to veterans of the genre, but on the other hand, you're playing as an alien armed with a gun that summons meteors, and by removing the mothership, it removes the grind of flying back-and-forth to the mothership every time you want to start a new mission or upgrade something.  Plus, there's a lot more to do and discover in the original.  Even better, you can do all of this with a friend in split-screen co-op.  However, one area of the gameplay which still isn't perfect are the missions.

Don't get me wrong, the story missions and side quests are varied and a ton of fun, especially the Arkvoodle Cult side-quests, but there's a certain mission type the game relies on a bit too much, and its protection and escort.  In Destroy All Humans, the game featured one too many stealth-only missions, and though the sequel downplays them, the trade-off is an emphasis on ones where you protect an individual or designated target.  I don't normally mind escort missions, but when one of the story quests involves guiding and protecting Natalya as she goes from one of side of the map to the other, followed by protecting her as she drives to another destination in a different part of the map, then maybe you've gone a bit too far.  On the other hand, the boss fights are awesome, with the highlight being when Crypto fights a giant monster called Kojira in the streets of Takoshima.

Destroy All Humans 2 doesn't look too different from its predecessor, meaning the graphics retain their uneven quality.  Fortunately, the art style captures the look and feel of the 60's and the locations you'll travel to, such as the hazy afternoon sky of Bay City, the dark, gloomy night of Tunguska, or the vast, empty space of the moon dominated by Soviet installations.  The physics aren't as exaggerated and broken as in the original, so everything has proper weight and momentum to it.  A nice touch is that humans occupying a vehicle will bail out if you use PK or the abduction beam on it.  Voice acting is equally solid, with the obvious highlight being Grant Albrecht and Richard Horvitz as Crypto and Pox respectively.  The same goes for the music, which captures the mood of each location and the current situation.  There's also a lot of era-specific licensed tracks which play during certain quests, all of which are great.

Destroy All Humans 2 is a textbook example of how you do a sequel.  The game retains the core concept of being an alien running amok and causing havoc but overhauls what was seen in the first game to create a smoother experience.  This follow-up is a true open-world title and provides players with a lot to do besides anal probing hippies.  Using Crypto's wide range of powers and weapons feels a lot better, and the varied roster of enemies adds a nice degree of challenge to the combat.  The increased emphasis on escort missions is a tad bothersome, but it doesn't derail the experience.  Much like Crypto, Destroy All Humans 2 evolves the series while retaining the anarchic, comedic tone its known for.