Close Encounters of the Furon Kind: A Destroy All Humans Retrospective Introduction 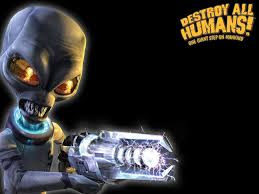 Growing up, I never got the chance to experience many of the quality titles released during the PlayStation 2/Xbox/Nintendo Gamecube console generation.  I had a PlayStation One, so instead of shooting space aliens in Halo, running down pedestrians to the tune of "I Ran" in Grand Theft Auto: Vice City, or exploring sunny vistas in Super Mario Sunshine, I was busy exploring Avalar in Spyro 2: Ripto's Rage or racing to victory in CTR: Crash Team Racing.  When I was 12, I got a PlayStation 2.  Soon, I slowly but surely began to get the games I had missed out on.  However, besides loving video games, I also loved movies, especially science-fiction films.

I'm not sure how I first heard about Destroy All Humans.  All I remember is seeing an ad in a back issue of Game Informer I had acquired from a flea market and being captivated by the image of an angry alien terrorizing humans.  Eventually, I got my hands on the first two games, and was hooked.  I spent countless hours unleashing havoc on the human populace with an eclectic arsenal of weapons and mental powers.  It was my first experience with the open-world genre, and I loved it, though some would say I was a bit obsessed.  Since I was a teenager with no source of income, I wasn't able to get my hands on a lot of games, and with the ones I had, I put my hours into them, especially Destroy All Humans and its sequel.

Heck, the reason I got an Xbox 360 in 2011 was just to play Destroy All Humans: Path of the Furon.  Although I knew it had been slammed by critics, this didn't stop me from wanting to play the title, and like the other games in the series, I put my money's worth into this title.  As years passed and my tastes in gaming became more developed, I moved away from Destroy All Humans to explore the likes of Grand Theft Auto and Saints Row, two franchises I equally love, but I still had a soft spot for Destroy All Humans.

Ten years have passed since the last installment, Destroy All Humans: Path of the Furon, and though THQ Nordic owns the rights, not much has been done with the series, yet.  Until Crypto's return is officially announced, I'm going to take a trip down memory lane with a series retrospective on Destroy All Humans.  From Friday, December 7, up until Tuesday, December 11, join me as I take a look at the game that started it all, followed by its psychedelic sequel, and a pair of funky follow-ups.  Expect some surprises along the way, especially with regards to Crypto's next-gen installment, Path of the Furon.
Posted by William Lowery at 5:33 PM