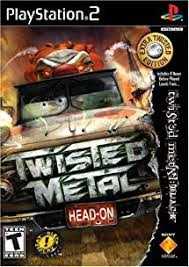 During the 1990's and 2000's, car-combat games were all the rage.  The idea is simple: take an everyday station wagon, modify it with guns, rockets, and armor, pit it against opponents, and let the mayhem ensue.  Games like Carmageddon, Vigilante 8, and Roadkill allowed gamers to both unleash their inner speed demon and major anarchist.  If there's one franchise that defined the genre, though, it's Twisted Metal.  Created by David Jaffe, the series was all about raising hell and fighting competing drivers in locations across the world.  Although the franchise has laid dormant since 2012's Twisted Metal, it's still a fondly remembered line of games.  Released in 2008 for the PlayStation 2, Twisted Metal Head-On: Extra Twisted Edition is a port of the 2005 PSP title of the same name but loaded with new content that will satisfy anyone's Sweet Tooth.

Twisted Metal games focus on the Twisted Metal tournament, an annual event where drivers from varying backgrounds compete against one another for the grand prize.  Said prize is a wish, courtesy of the creator of the competition, Calypso.  After eight matches and two boss fights at the middle and end of the campaign, the selected driver meets Calypso to get his or her wish granted.  The catch is the meaning of their wish gets twisted, pardon the pun, by Calypso, resulting in a less-than-stellar outcome.

This series isn't know for its plot but rather the crazy, over-the-top world created for this franchise, and the characters who inhabit it.  The best way to describe Twisted Metal is it's a heavy metal album crossed with a comic book; after all, the face of the franchise is Sweet Tooth, a man who wears a deranged clown mask and whose head is always on fire.  Tone-wise, Head On feels more like a successor to the first four Twisted Metal games than a continuation of 2001's Twisted Metal Black.  All of the grim, psychotic imagery found in Black is gone.  The characters are crazy, yes, but not in a mentally unhinged way.

Speaking of the characters, part of the fun of playing the campaign in Twisted Metal Head-On is to see the outcome of a character's wish.  For example, Jamie and Carl Roberts, drivers of the police car "Outlaw," get into an argument over whether or not to kill Calypso, but whe Carl shouts, "I'd wish you'd shut your mouth!"  The sinister mastermind takes those words and causes Jamie's mouth to seal shut.  The devious twists of the endings call to mind Twilight Zone and Tales from the Crypt, so it's worth playing as each character to see what happens.

Regardless, in this game you'll choose from a selection of drivers and take them through the Twisted Metal tournament.  The series has a unique control scheme; whereas other driving games utilize X for gas, square for brake and circle for the emergency brake, Twisted Metal flips the buttons around.  Square accelerates, circle brakes, and X is for the e-brake.  It's a little off-putting at first, but you quickly adjust to it and the vehicle handling is good, so making tight turns isn't a problem.

Each character's vehicle has different stats for handling, speed, durability, and weapon damage, plus all cars come equipped with a special attack and a machine gun with infinite ammo that overheats after too much use.  Additionally, you can input combinations on the d-pad to use special abilities like temporary invisibility, a shield, or a freeze attack.  Levels take place around the world in locations such as Los Angeles, Paris, Egypt, Greece, Rome, and Tokyo.  Scattered around the stages are weapons like homing missiles, fire missiles, power missiles, remote bombs, and environmental attacks.  Exploring levels during the matches rewards the player with hidden passageways or portals that teleport drivers to another part of the level or to a minigame.  Beating these within a certain time limit unlocks new characters for single-players and stages for multiplayer, and all pick-ups acquired carry back into the main game.

Combat in Twisted Metal is a lot of fun.  Driving around Paris or Rome and dousing rivals with napalm or a barrage of rockets never gets old.  Even better, each stage is fully destructible, to a certain degree.  You may not be able to bring down entire buildings, but you can level certain structures like the Eiffel Tower or the Hollywood sign, which often yields explosive results.  No matter what character you play as, he or she will face off against two bosses, one at the halfway point of the campaign, and the other at the end.  The first fight is against Cousin Eddy and his family of rednecks, who replace series regular Minion, while the finale pits you against Dark Tooth, basically a more aggressive version of Sweet Tooth. This encounter is split into two phases, with the second half pitting you against Dark Tooth's towering head.

However, even on Normal difficulty, Twisted Metal Head-on: Extra Twisted Edition is an easy experience.  Part of this stems from the upgrade system.  When an opponent is defeated, they drop an upgrade, which either boosts weapon damage, overall health, or the total amount of turbo and special ability energy a car has.  These can make your vehicle pretty overpowered, to the point that in later stages, you can defeat opponents with just the special weapon and machine gun.  Should you die, though, you respawn, but all upgrades are removed, but reacquiring them is no problem.  The only time you'll face any real challenge is Dark Tooth, if only because his weapons can annihilate you if you let him get close enough.

Besides Twisted Metal: Head-On, there's also Twisted Metal Black: The Lost Levels, plus some extras.  The Lost Levels consist of four stages that can be beaten within thirty minutes but beating all of them on the highest difficulty unlocks a special reward.  The extras include "Sweet Tour," a documentary on the history of Twisted Metal, and the lost endings for the first game.  "Sweet Tour" has players control Sweet Tooth, who escapes from his constraints and must escape the prison and reach his ice cream truck, which is locked in a junkyard.  On-foot sections were going to be introduced in Twisted Metal: Harbor City, so this is a vertical slice of what could have been.  Hidden throughout are little icons that provide facts about the games or concept art.

Next is Twisted Metal: The Dark Past, a retrospective on the franchise up till Twisted Metal: Head-On.  This is great material for those jumping in, and for fans of the series, it's interesting to hear David Jaffe and company discuss their thoughts on Twisted Metal 3 and Twisted Metal 4, since they were not involved with those games.  Throughout the video, groups of numbers flash across the screen.  Translating these numbers into letters reveals a message hinting at what would become Twisted Metal for the PS3.

Finally, there are the lost endings for the first Twisted Metal.  Initially, the plan was to have live-action cut-scenes for the endings, but these were scrapped at the last minute and replaced with text crawls in the final product.  The endings, as low-budget and hokey as they are, are hilarious for those reasons alone.  Seeing Sweet Tooth get excited over the sight of a paper bag is one of the funniest things you'll ever see.
Graphically, the game looks alright.  This is a port of a PSP title, so the visuals have't received much of an upgrade from its original release.  Despite this, the graphics sport a cool art style with colorful environments and over-the-top explosions, and the motion comic endings play off the game's comic book feel.  Voice acting, while limited to the endings, is serviceable, but the music is pretty good.  It's high-octane rock and fits perfectly with the vehicular carnage, and the themes for each level play off what said locations are known for.

Twisted Metal Head-On: Extra Twisted Edition is a fun title and a great jumping-o point for newcomers, given all of the extras it comes with.  The vehicular combat is riotous, and though it is lacking in difficulty, the selection of characters is diverse and it's worth trying out each individual, if not to see how their endings play out.  Plus, the bonuses, which include levels from a cancelled game and a making-of documentary, are great for getting gamers up to speed on what Twisted Metal is all about.