Drive-In of Terror 3 Presents: Halloween III: Season of the Witch (1982) 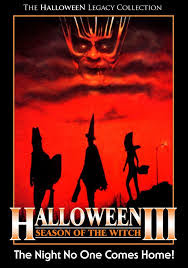 In 1978, director John Carpenter astounded audiences with Halloween.  Although not responsible for creating the slasher genre, the film's success popularized it, and chances are without Halloween, the slasher genre as we know it would not exist.  Three years later, the story continued in Halloween II with Michael Myers stalking an injured Laurie Strode at the world's emptiest hospital.  The movie ends with Dr. Loomis, Michael's psychiatrist, stopping the killer by cornering him in a room and igniting a blast that kills the both of them.  With Michael Myers dead, how do you continue the franchise?  Attempt to turn it into an anthology series, of course!

Halloween III: Season of the Witch, released in 1982, was an attempt by John Carpenter and company to move the series into a new direction.  Instead of finding a way to rehash Michael Myers over, and over, and over, Halloween would become an anthology series a'la The Twilight Zone.  However, when the film was released, Season of the Witch was a financial and critical disappointment, and five years later, Michael Myers was brought back in Halloween 4: The Unnecessary Return of Michael Myers.  Since its release, the third entry has gone on to receive a massive cult following, with some arguing it's as good as the first.  Is Season of the Witch an overlooked gem, or should it have remained the black sheep, albeit, one of many black sheep in the series?

An old man (Al Berry) is pursued by a mysterious individuals that seem to be after a mask he has.  He makes his way to a gas station, where the owner (Walter Jones) takes him to the hospital, unaware he's being followed.  The man, Mr. Grimbridge, is checked out by Dr. Daniel Challis (Tom Atkins), who warns the doctor they're coming for him, but he's unsure by what the man means.  Not long after, one of the stalkers sneaks in and kills Grimbridge, but before Challis can stop him, the killer gets into a car, pours gasoline all over and sets himself on fire, blowing up the car.  When the police arrive, Grimbridge's daughter (Stacey Nelkin) shows up and discovers what's going on.  Luckily for them, Challis still has the mask Ellen's father had with him.  Using the shipping forms at his store, the two trace the order back to Santa Mira, a small town kept under the ownership of Silver Shamrock, who produced the masks.


While spending the night at the motel, the person in the next room, a woman named Marge (Garn Stephens), notices the logo on the back of her mask has fallen off, revealing a computer chip on the inside.  Messing with the chip causes a laser to fire off, killing her instantly.  A group of paramedics show up later that night and take the body away.  The next day, Daniel Challis and Ellen Grimbridge head to the factory, posing as a pair of people looking to order Silver Shamrock masks.  The two of them, along with a family, are given a tour of the place courtesy of the company's owner, Connell Cochran (Dan O'Herilihy).  Later that night, Ellen and Daniel are ambushed by a group of the sinister figures.

Challis escapes, but Ellen is captured.  He makes his way back to the factory but is discovered.  Cochran takes him to the factory's basement and shows him a piece of Stonehenge they have stolen, which they are using to create the chips.  Through the power of a special commercial that will play on Halloween night, anyone wearing the mask dies instantly, so Daniel must save Ellen, destroy the factory, and figure out how to stop Cochran's scheme.

Halloween III: Season of the Witch is one of the most bizarre, out-of-left-field entries ever seen in a franchise.  The set-up is so weird one has to wonder why the movie wasn't just called Season of the Witch because with the Halloween III title, all it does is confuse and alienate people.  The only proper connections it has to the other films is that the original Halloween is just a work of fiction in this film's universe, and the production features various cast and crew members from the previous two films.  Look past it's abnormal characteristics, though, and you have a film that is surprisingly enjoyable.  Although not directed by John Carpenter, everything about it, from the score to the tone to the cinematography is ripped straight from his playbook.  Taken on its own merits, Season of the Witch is a theatrical Twilight Zone episode, and a good one at that.

What's most surprising about the movie is its social commentary.  Halloween III explores how the holiday has become overly commercialized to the point people have forgotten its dark roots.  Connell Cochran, the film's antagonist, is trying to bring the old spirit of Halloween back by merging it with something commercial, in this case, masks.  Throughout the movie, ads are seen on TV and heard on the radio promoting the Silver Shamrock masks and a special giveaway happening on Halloween night.


Dan O'Herilihy imbues the character with the right amount of charisma and creepiness.  He seems like a warm, inviting person on the outside, but you can tell he's hiding something, something evil.  In one of the film's memorable moments, Cochran explains to Challis why he wants to create the deadly masks, and his speech is equal parts chilling yet ironic.  To Challis, what he's doing is maniacal, but from the perspective of Cochran, it's a practical joke, "the joke of the children," he says.  Knowing what he wants to do, you hope Challis will be able to thwart the company's plans, but there are some curveballs.

Attempting to stop the sinister Cochran is the hero, Daniel Challis.  Actually, calling him the hero is a bit questionable.  He's a divorced husband who hits on the female staff members at the hospital and spends a lot of time drinking rather than being with his kids.  Plus, he sleeps with Ellen Grimbridge, even though he's clearly twenty years older than she is.  Despite the character's flaws, Tom Atkins is a delight to watch and makes the character his own, which can be said for a lot of the characters Tom Atkins has played.

As much as I like Season of the Witch for trying something different, it's not a perfect movie.  The biggest problem is Cochran's plan.  First off, how did his company manage to steal a piece of Stonehenge without anyone noticing?  Even Cochran acknowledges this plot hole, boasting, "We had a marvelous time bringing it here!" when he's showing Challis the research facility.  Secondly, the commercial which causes the masks to kill its wearers goes off at 9 p.m.  However, nine o'clock happens at different points in the U.S.A., meaning there would be enough time for other regions of America to take off the channels since reports of kids dying left and right on the Eastern seaboard would spread quickly.

Also, aside from Daniel Challis and Connell Cochran, the other characters are forgettable, especially the family, who's comical behavior makes it look like they just came off the set of a road-trip comedy.  Then there are Cochran's evil henchmen, who are really robots.  These sharp-dressed machines aren't intimidating at all; sure, the kills they pull off are cool, such as when a homeless man (Johnathan Terry) gets his head yanked off by a pair of the robots, but they lack any sense of danger or threat due to their intense slow-walking and delayed reaction times.

Though it has its problems, one surprising element of Halloween III is its downbeat ending.  After rescuing Ellen and destroying the factory, Challis and her escape, fleeing the town in search of a way to prevent the commercial from being broadcasted across California.  Unfortunately, the real Ellen was killed off after getting captured and replaced with a robot duplicate, which tries to kill Challis.  He nearly avoids death and makes his way to the gas station from the beginning of the movie.  He frantically calls up the stations, telling them to cut off their channels, and succeeds, except one channel remains.  Some kids wearing the masks stare into the television, with Challis frantically yelling "Stop It!" to the person on the other line.  Before anything else happens, the film cuts to black and the credits roll.

There's not much in terms of special effects, but what's present is good, especially the death scenes, which feature some gruesome make-up work.  On the other hand, the music is excellent.  Composed by John Carpenter and Alan Howarth, the score, like most of Carpenter's other work, is minimal but extremely effective.  The title theme clues us in to the film's ominous nature and lets us know we're about to be treated to something wild and unique, a far cry from the terrors of Michael Myers.

Halloween III: Season of the Witch is a flawed but highly underrated movie.  The film might be Halloween in name only, but the movie makes up for it via its crazy storyline and commentary on the commercialization of Halloween.  Connell Cochran is a charming yet wicked antagonist, while Tom Atkins rules the roost as Daniel Challis.  As I've discussed earlier, though, it's far from a masterpiece.  The remainder of the cast is nothing special, some elements of the story are very nonsensical, and the attempts to create dread through Cochran's army of robot goons fall flat on their face.  Though flawed, Season of the Witch is a lot of fun.