Drive-In of Terror 3 Presents: Friday the 13th: The Game 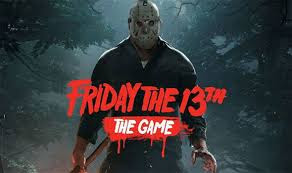 FOREWORD: SOME OF YOU MAY BE WONDERING WHY IT TOOK SO LONG FOR THE NEXT REVIEW IN DRIVE-IN OF TERROR 3.  SIMPLY PUT, WORKING ON MAJOR ASSIGNMENTS FOR COLLEGE THREW THINGS OFF.  REST ASSURED, THOUGH, ALL INTENDED REVIEWS WILL BE OUT BEFORE OCTOBER IS OVER.

SECONDLY: THIS WAS INTENDED TO BE A REVIEW OF RESIDENT EVIL: CODE VERONICA, BUT I DIDN'T FINISH IT IN TIME FOR REASONS I'LL DISCLOSE LATER.  AS A BACKUP, I DOWNLOADED THIS GAME SINCE IT WAS FREE TO PS PLUS MEMBERS.  APOLOGIES FOR THE FEW WEEKS OF INACTIVITY, BUT WITHOUT FURTHER ADO, LET'S DO THIS THING.

Friday the 13th, released in 1980, is a horror film about a group of up-and-coming camp counselors who attempt to re-open the abandoned Camp Crystal Lake.  Over the course of the movie, they are picked off by a woman named Pamela Voorhees, who is seeking revenge for the drowning of her young son, Jason, back in the 1950's.  Although she is defeated at the end of the film, the surviving counselor has a dream where she is attacked by the rotted corpse of young Jason.  Little did Paramount, Sean S. Cunningham, or Victor Miller know that the little boy would become the face of one of the most popular horror franchises ever.

Since Friday the 13th Part 2, Jason Voorhees, now a fully-grown adult, has murdered and butchered anyone who sets foot on Crystal Lake.  His bloody rampages even crossed into New York, albeit briefly, and into outer space in Jason X.  With a series as big as Friday the 13th, video games seem like a natural extension of the movies.  Aside from a horrible NES game and a guest appearance in Mortal Kombat X, the fearsome hockey-mask wearing killer didn't get a proper game to call his own until 2017 with the release of Friday the 13th: The Game.

There's not much plot in this game, aside from "Camp counselors have fun, Jason shows up and starts killing them hoes, and now they must survive," which is normally what happens in most of these movies, so it's excusable.  Fans of the franchise will appreciate the numerous nods.  Every Jason from Part 2 up to Jason Goes to Hell is playable; yes, even Roy Burns, the fake Jason from Part 5, is available for selection.  Plus, all of the levels are locations from the films, including Camp Crystal Lake from the original, the Jarvis House from Part 4, and the rehabilitation center from Part 5.


Look closely in each stage, and you'll find plenty of references to characters and moments from the various movies.  The best nods are the audio tapes you can potentially find during a multiplayer match.  These tapes are interview sessions with franchise characters Pamela Voorhees and Tommy Jarvis.  It's impressive the developers went to such great lengths to explore the two characters, more so than any of the films ever did.

Every played hide and seek as a kid?  Well, the gameplay is like that, but with a lot more emphasis on survival and avoiding a hulking brute wearing a hockey mask.  There are two modes, single player and multiplayer.  Single player consist of an offline multiplayer mode, complete with AI bots, and challenges.  As Jason, the goal of the challenges is to off the camp counselors in unique ways.  Different scenarios present different ways to kill counselors.  Once the mission is over, players are awarded skulls based on factors like killing all humans, avoiding detection, and achieving the required amount of points for said mission.  Performing well in each stage rewards the player with taunts to equip their character with in multiplayer.

Multiplayer, though, is where the meat of the game is.  Before each match, players can choose whether to play as a counselor or Jason.  Counselors have their own varying stats for things like sprint speed, total stamina, stealth, and composure when encountering Jason or getting stuck in the dark.  The same goes for the selection of Jason's.  Some move quicker than others, or they might have better defense or be more proficient with one of the four abilities available for use.


For the next twenty minutes, counselors need to try to survive the night, but as Jason, the goal is to hunt and kill the counselors.  True to the movies it's based on, Jason can't be killed, unless you follow a specific series of tasks, but there are multiple ways of escaping.  You can try repairing the phones to call the cops, fixing the car or boat to get the hell out of Dodge, or you can find a CB radio to summon Tommy Jarvis, more on this later.  Cabins and other facilities are scattered around each stage; inside them are either supplies, weapons, or parts required to fix the vehicles or phone box.

Characters can only hold one weapon on them; alternatively, if you find a bear trap, you can place it somewhere to trap Jason in its grasp momentarily.  First-aid sprays allow you to heal yourself or a partner, while a pocket knife is useful for making a quick escape if Jason grabs you.  Additionally, maps let you see where you and the other players are, and a walkie-talkie lets you communicate with nearby gamers, if they're playing with a mic on.  Be forewarned, though, as you search cabins, repair vehicles, and do your best to survive, Jason is on the hunt, but by crouching, locking cabin doors, and hiding in closets or under beds, it can decrease the likelihood of Jason finding you.

Of course, this is a game based on a slasher movie, so when Jason finds and kills you, you're dead.  Then, you have to wait till time runs out or everyone else is dead for the match to be over, but if someone found the CB radio, there's a chance one of the dead players will spawn back into the match as Tommy Jarvis.  Tommy is the most powerful human character in the game.  He has the highest stats, is equipped with all items, plus he has a shotgun that can stun Jason for a limited period of time.  Despite being incredibly strong, Tommy can still die, but his high stats and equipment can be used to get other players out of a sticky situation.

Then there's the man behind the mask, Jason Voorhees.  True to the movies, he is slow and sluggish, but extremely powerful.  He comes equipped with a melee weapon, throwing knives, bear traps, and four unique abilities.  Sense highlights nearby counselors.  Morph lets the killer instantly transition to a spot on the map, perfect for catching up to where other players might be.  Shift puts jason into a first-person perspective as he zooms across the level, Evil Dead-style, for a brief period of time.  Finally, stalk lets you get the drop on people without them knowing you're behind them.


Jason can also do things such as shatter windows, so counselors take damage when they escape, as well as disable the cars and boats they might try to flee in, and he can cut the power, so the police or Tommy Jarvis can't be called in.  Being Jason is an empowering experience, but it's not all blood and games.  Getting used to his controls and movement is a bit of a hassle, and the stun locks for whenever he takes damage last a bit too long.  If you're having trouble trying to be a successful killer, always use the offline options to hone your skills, and experiment with each Jason to figure out which one works best for you.

When everything clicks together, Friday the 13th: The Game is an immensely entertaining and frightening good time.  Sneaking around in the cabins, only to hear the music suddenly swell up will get the heart pumping, as does being trailed by a 7-foot hulking brute who will break you in half.  It's quite satisfying when you manage to survive the whole twenty minutes or cooperate with other players to escape via the car, boat, or police.  Of course, your enjoyment of the multiplayer depends on how much you enjoy playing with strangers.

Playing with friends isn't a problem since you can work with one another to come up with plans and whatnot, but with individuals, the experience is 50/50.  Sometimes, they'll work together with you; more times than not, though, they're surviving on their agenda, but at least they aren't hostile about it, usually.  There are rare moments when you're put into a match with players who think killing their partners, running them down with the car, or working together with the person whose Jason is the sensible option.  Such an incident only happened once with me, but there are multiple stories online and videos on Youtube of players dealing with idiots who love backstabbing others.  However, what was more prevalent were incidents where a match started, only for it to end abruptly because the person who was Jason left.

Friday the 13th's graphics are a mixed bag.  Where the game shines most technically is with its atmosphere.  The dark skies or pouring rain, combined with the ambient music and lighting leads to a foreboding sense of dread that Jason may be around the corner.  Yet, the character models look waxy and ripped straight out of an Xbox 360 game, as do the animations.  Plus, there are a lot of weird physics glitches during gameplay and Jason's executions.  Sound varies between good bad.  The voice acting, though minimal, is poor, but you can tell this was done to preserve the campy nature of the films.  The only decent performances are in the audio tapes and the lines from Tommy Jarvis, who is played by his actor from Part 6, Thom Mathews.  On the other hand, the music is pretty good.  Series composer Harry Manfredini provided the score to the game, and the tunes are solid.


Friday the 13th: The Game is similar to the fabled franchise it's based off, both in set-up and overall quality.  It lacks polish and the cat-and-mouse gameplay gets old, especially during longer play sessions, but there's no denying that whether you're Jason or one of the red-shirt counselors, the two sides offer their share of thrills.  Surviving a night at Crystal Lake is harrowing, and being the killer chopping the other to pieces is satisfying, once you get the hang of it.  It's basic, but it's set-up is appealing.