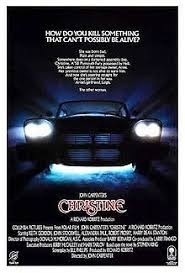 John Carpenter is regarded as one of the greatest directors of our time.  Stephen King is considered to be one of the best writers of all time.  When you have two men, each responsible for creating a variety of iconic, influential works, it only makes sense they should collaborate at some point or another.  In the early 1980's, Stephen King was working on a new novel, Christine, and Hollywood was itching to adapt another one of King's books, especially after the success of prior adaptations like Carrie and Salem's Lot.  Columbia Pictures bought the rights to the book, and John Carpenter was brought on board to direct.  Released in 1983, Christine is a tale of teenage angst and a boy's obsession over a car, a car that happens to be pure evil.

Arnie Cunningham (Keith Gordon) is a down-on-his-luck nerd who lives with strict parents and finds himself frequently picked on by the bullies at his high school.  By contrast, his friend Dennis (John Stockwell) is one of the popular kids and a successful football player.  After getting into a fight with bully Buddy Repperton (William Ostrander), Arnie and Dennis leave school to talk things out and pass by an old Plymouth Fury that's for sale.  The two inspect the car, which is in horrid shape, and Arnie quickly becomes fixated with the car, which draws the attention of its owner, George Lebay (Roberts Blossom).  Lebay explains the car used to belong to his brother, Roland, who died not too long ago, and now he's looking to sell it.

Arnie buys the car, much to the dismay of Arnie's parents and Dennis, but he thinks he can get the car into working shape.  He takes the Plymouth Fury to an auto-repair shop owned by Will Darnell (Robert Prosky) and gets to work fixing it.  A few months later, Dennis is in a football game when he notices Arnie pull up in the Fury, which has been restored, and he now has a girlfriend, Leigh (Alexandra Paul).  However, this momentary distraction results in Dennis getting injured and taken to the hospital.  Arnie visits Dennis, but he notices Arnie's personality has changed.  No longer is he shy and insecure; instead, he's brash and abrasive.  Little does he know Arnie has become increasingly hostile towards his parents and girlfriend, to the point he ignores them and other priorities to spend more time with Christine, which as we learn, has a mind of its own.


John Carpenter's Christine is like a high-school movie mixed with elements of Stephen King's Maximum Overdrive.  The film explores one boy's struggles to overcome his feelings of anxiety and lack of confidence, but after finding something that turns his life around, said thing turns him into a completely different individual, one who is worse than the bullies that used to harass him.  Arnie and his relationship with Christine, the car, is the film's focal point.  At first, you sympathize with Arnie and what he's going through, but once he becomes hostile towards others, you start relating more to the people trying to help him.  Keith Gordon's portrayal of Arnie Cunningham is fantastic, as he does a great job showing the character's personality shift through his acting.

In the film's later acts, the focus begins to shift from Arnie to his friends Dennis and Leigh.  Though they know nothing about each other, the two share a common struggle.  You want to see if they can save Arnie, but he's gone too far off the deep end to be redeemed since Christine has gotten the better of him.  Other characters, including Buddy Repperton and his gang of cronies, along with Darnell, are equally interesting.  The bullies do come off as cartoonish, but they're people who care less about those around them in favor of just screwing around and having a good time.

Two other characters worth mentioning are Darnell and Detective Junkins (Harry Dean Stanton).  Darnell is a no-nonsense man who doesn't take no for an answer and doesn't like too be pissed off over trivial manners.  Though he isn't in the movie much, Darnell is great to watch, and Robert Prosky portrays Darnell as described in the book.  Similar to Darnell, Junkins doesn't show up till the second half of the picture, but Harry Dean Stanton is fantastic as the detective trying to figure out the mysterious murders of Buddy Repperton and company.  Yet, the true star of the movie, since her name is the film's title, is Christine.

We know we're in for something when "Bad to the Bone" by George Thorogood is playing during the opening scene set at a car factory in Detroit.  Christine is a ferocious vehicle.  It never speaks, which would be dumb, but it uses the radio and the songs that play on it to indicate to the audience what the car is thinking of.  For example, when Dennis investigates the car late one night at Darnell's garage, Christine starts blaring "Hear Me Knocking but You Can't Come In," which startles him, and has him fleeing the garage.  Christine's other unique feature is that it's nigh-indestructible.  After the bullies find the car and rip it to shreds, Arnie is left in a state of dismay and anger, and while looking over the mess at the garage, he notices the car fixing itself up.  Soon, Christine is hunting down Buddy and the gang, picking them off one by one.


It should be noted there are some differences between the novel and film versions of Christine.  The biggest change relates to the vehicle itself.  In the movie, the car has a mind of its own, but in the book, it's controlled by the ghost of Roland Lebay.  In King's book, Roland is the one who sells the car to Arnie, not George, and he's a bit of a jerk.  Later, he dies, but his spirit possesses both the Plymouth Fury and Arnie, going so far as to have a corporeal version of himself manifest in the car.  The film doesn't feature Roland, and he's only mentioned in passing, but George acts the way his brother did in the book, even though George was shown as being a nice guy in the novel.

These changes do not diminish the film; on the contrary, Christine is faithful to the source material.  Since this is a movie about a killer car, though, there have to be special effects, and the film is no slouch in this regard.  Much like Maximum Overdrive, various camera techniques are used to hide the stunt drivers handling the car, or cars.  Over fourteen Plymouths were used during production, and it shows.  At one point, Christine drives through a gas station, which explodes, and then you see a burning Plymouth Fury driving on the road.  Knowing there's a person inside there driving is an impressive feat.  Another impressive sequence is when the car fixes itself.  To achieve this effect, everything was shot in reverse, and it's amazing to watch.

Then there's the stellar soundtrack.  The music uses synth, which, while minimalistic in nature, builds up tension surprisingly well, and it sells a lot of key moments.  Seeing a flaming Plymouth Fury chase down a fleeing Buddy Repperton and turning him into a smoldering corpse is made chilling by the lack of sound effects, and the only thing we hear are the rhythmic, repetitive beats of the music.  Additionally, the selection of licensed songs is superb, featuring a bevy of 50's era music to indicate Christine is a machine from a forgotten decade.

Christine is an excellent film.  It's a coming-of-age, high-school narrative mixed with vehicular homicide.  Arnie is a wimp, albeit a relatable one, and his transition into a cold-hearted jerk is fascinating to watch.  Of course, this is a horror film, not a drama, and the movie doesn't hold back in showcasing the wrath of a vintage automobile as it hunts down and kills people.  In a way, the car is like Michael Myers in the form of a car, unstoppable and unrelenting.  Stephen King wrote a great book; in turn, John Carpenter made a great movie.