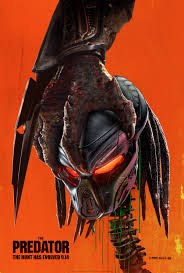 In 1987, director John McTiernan made Predator.  What starts out as a masochistic action film quickly morphs into an intergalactic version of The Most Dangerous Game as an alien from a far-away planet hunts and picks off a team of military commandos until only one member of the unit is left.  Exciting, tense, and an all-around blast, Predator has gone on to be regarded as a classic of both the action and science-fiction genres.  Three years later, a sequel arrived in the form of Predator 2, which added more gadgets for the Predator to use, a metropolis for it to cause havoc in, and a healthy heaping of Danny Glover, Gary Busey, and the late, great Bill Paxton mixed into the chaos.

For twenty years, the series laid dormant, not accounting for a pair of cross-over movies with the Alien franchise and a slew of merchandise that came out as well, but in 2010, we got Predators.  Gone was the city setting; instead, it was back to the jungle, albeit on a place far away from Earth, and stuck on the rock was a gang of individuals with nothing in common, except for being cold-blooded killers.  This year, everyone's favorite dreadlock-sporting alien returns with The Predator, released on Friday, September 14.  In the director's chair for this go-around is Shane Black, who starred in the original and has had a successful writing and directing career.  So, what could go wrong?  Well...

WARNING: MAJOR SPOILERS AHEAD FOR THE PREDATOR

On a hostage-rescue mission in Mexico, a sniper (Boyd Holbrook) and his team are attacked by a Predator, whose ship crashed not too far from where they are.  The alien wipes out most of the unit, except for the sniper, who manages to incapacitate the Predator.  He steals the creature's gear and sends it to his P.O. Box back in America, but not long after doing this, government agents find and arrest him.  The equipment makes its way back to where he lives, and his autistic son, Rory (Jacob Tremblay), takes the package to his room and begins to examine the contents.  One of the devices he activates emits a signal that alerts a Predator that had been following the one from the beginning, so he makes is way to Earth.

Elsewhere, Quinn, Rory's father, is interrogated by the government, who are keeping the Predator from earlier in a research facility.  He's put on a transport bus filled with soldiers that were all detained for various reasons, but the vehicle doesn't make it too far since the Predator breaks free, goes on a rampage, and escapes.  Quinn and the soldiers take control of the bus, bringing along a researcher named Casey Bracket (Olivia Munn) that was chasing the escaped alien.  They make their way to Quinn's hometown to save his son, who is ambushed a pair of dog Predators.  The gang saves him, but not before they run into the Predator, who is confronted by the Super Predator that has just arrived.  The Super Predator kills the fugitive alien before setting its sight on the group, who are in possession of the stolen alien tech.


As the fourth installment in the franchise, sixth if you include the cross-overs, The Predator attempts to deepen the mythology of the series by exploring why the alien race comes to Earth to hunt.  While an interesting idea on paper, the results are far from good.  The movie reveals the Predators have been harvesting DNA from other species in an attempt to better their own kind, as well as to create special hybrids.  What could have opened up the possibility for crazy, new takes on the Predators falls flat on its face.  Aside from the introduction of Predator dogs, there aren't any other weird monstrosities for the humans to take on, but wasted potential is far from the movie's main problem.  Let's start with pacing.

Too often, the movie jumps from one location to the next, with not much context as to what the current setting is.  New characters show up, only to disappear and never be seen again.  There's a recurring contrivance of people leaving, only to reappear a few minutes later with something necessary to further the journey.  Never are we shown how they manage to obtain what they need, which comes off as lazy.  About two-thirds of the way in The Predator, a few of the group members leave to find a means of transportation so they can continue their pursuit of the government bad guys.  While this happens, a shoot-out takes place between the good guys and bad guys, and when it's over, the ones who left have returned with a news chopper they found who knows where.

The cast themselves is a mixed bag.  Quinn, leader of the ragtag team, is a good enough hero, but the standout is the group of soldiers he teams up with.  What sets them apart from your normal action protagonists is that they're mentally damaged in different ways.  Some have been detained for committing crimes, while others suffer from mental illnesses like PTSD and Tourette's syndrome.  The problem is that the writing and direction of the flick diminishes these misfits to nothing more than a group of chatterboxes who don't know when to shut up.

Comedy takes center stage in The Predator, which is surprising for a series of films about an intergalactic alien that collects human skulls as trophies; unfortunately, it's not good.  Dialogue is loaded to the brim with quips, quips, and more quips.  Whenever a character isn't delivering exposition, they're making a snarky remark.  Too often, these scenes where the protagonists banter back and forth trading jokes drag on longer than they should, and it diminishes any tension or dread in later scenes featuring the Predator or Super Predator killing people.

Going back to the cast, next is Rory.  Similar to the Loonies, Rory suffers from a mental illness, in this case autism, which is fine, but given how we learn the Predators are trying to become the ultimate species by harvesting lesser ones, why go after someone who has an ailment?  I understand that the Super Predator realizes the kid is a secret genius, but wouldn't harvesting his DNA in turn afflict his own kind with autism once he returned back to his home planet?  It would have made more since to have Quinn be the target of interest, given how he's quite adept at combat and too knows how to use Predator tech.

All of these issues with the story, writing, and characters reach their breaking point during the film's third act.  For the next thirty minutes, the audience is treated to a poor-man's retread of Predator as Quinn, his son, the Loonies, Bracket, and the surviving government agents are hunted down by the Super Predator in the woods.  In very predictable fashion, most of the cast is picked off until only a few individuals are left.  This sequence lacks any suspense whatsoever, given its rushed nature, and in keeping with tradition, one of them disappears for a few minutes, only to reappear at the last minute to help stop the villainous Predator.  Adding salt to the already gaping wound is the ending.  I won't say much, but if you've ever heard of The Guyver, you'll be ready for one of the dumbest moments in cinematic history.

In spite of everything discussed, The Predator is not a total loss.  Effects-wise, the movie looks good.  The highlight effect is the regular Predator seen in the first half of the film.  It's brought to life with practical effects, no CGI whatsoever, and it's amazing to watch in action, especially during the scene where it makes its escape.  On the other hand, the Super Predator was created with CG, and though not as impressive as the one made with practical effects, the creature looks alright, but some of the visual effects can get sloppy, especially during the third act.  Another highlight is the score done by Henry Jackson.  The music draws much inspiration from Alan Silvestri's work in the first two Predator movies, and it's great, it's just a shame the soundtrack is attached to a movie not so good.

Before I conclude this review, I want to address an elephant in the room regarding the making of The Predator.  For those who don't know, a good portion of the movie was re-shot prior to the film's release.  As a result, a lot of scenes devoted to fleshing out the characters and plot were swept under the rug, so much so the third act you see in the final product is different from what had originally been shot.  Remember how I mentioned the film doesn't really utilize the hybrid concept they set up?  Well, the original plan was to have the gang chase down the Super Predator, and during this sequence, the big, bad alien sends out failed hybrid test subjects to throw them off.  Sounds cool, right? Fox didn't think so.

It's debatable whether or not the stuff was cut could have improved the movie.  The dialogue, especially the humor, would still be very hit-or-miss, but at least the ideas and crazy moments planned could have made for a more unique and entertaining picture than what we got.  At the end of the day, The Predator is an underwhelming flick.  What should be a return to form for the series feels instead like a half-baked product.  The story is nonsensical, haphazard, and all over the place, and the characters leave a lot to be desired.  The effects may look nice and the score is well-done, but it isn't enough to save a movie too dumb for its own good.  The Predator is less a proper entry in the series and more akin to a straight-to-video knock off.