007: Everything or Nothing (PlayStation 2) Review 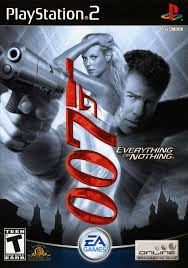 1997's Goldeneye 007 for the Nintendo 64 is regarded as one of the greatest first-person-shooters of all time and for many is the best game based off the James Bond films.  The fun single-player campaign combined with the hectic split-screen multiplayer solidified the game's status in the years to come.  Although plenty of Bond games have come out in the intervening years, none have really managed to outshine the Nintendo 64 shooter.  They've been good, mostly, but as they say, nothing can't beat the original.  Enter 007: Everything or Nothing.  Released in 2004 for the PlayStation 2, Nintendo Gamecube, and Xbox, this third-person-shooter, for me personally, is the best Bond game ever made, so let's find out why.

After an opening prologue in which James Bond steals a Soviet device about to be sold off in a secret meeting between two rival nations, the game begins proper with the secret agent infiltrating a research facility in Egypt.  The place is run by terrorists who have kidnapped a scientist who created nanobots that are capable of repairing nuclear reactors.  He destroys the facility and saves the girl, who is being held on an armored train; afterwards, Bond is sent to Peru to investigate the whereabouts of agent 003.  The agent is being held captive by Nikolai Diavolo, a former KGB student who was also a student of Max Zorin, the villain from the James Bond movie A View to a Kill.  Diavolo wounds 003 and escapes, and before dying, 003 tells Bond Diavolo is heading to New Orleans.

Once he's thwarted the villain's attempt to destroy the levees surrounding New Orleans using the reverse-engineered nanobots, Bond heads back to Peru and infiltrates Diavolo's mansion posing as a rally-car driver.  One things leads to another, and Bond discovers Diavolo plans on using the nanobots to destroy the Kremlin, take over Russia, and eventually all of Europe.  With the help of a geologist he met prior, the British secret agent must find a way to stop Diavolo's diabolical plan before it's too late.


If you thought Agent Under Fire's story was a bit out there, well you ain't seen nothing yet.  Killing world leaders and replacing them with clones is one thing, but a story where the former student of a dead Bond villain wants to take over Europe using NANOMACHINES, SON, goes a bit too far.  The ridiculous nature of the plot feels like an extension of the over-the-top nonsense seen in the 2002 film Die Another Day, but since this is a video game, the crazy set-up the developers devised is excusable.

Look past the nonsensical narrative and the game itself looks, feels, and sounds like a proper Bond adventure.  The voice cast is brimming with star power, as it includes Pierce Brosnan, Judi Dench, John Cleese, and Willem Dafoe, who plays Diavolo, and the sound and art direction are incredible.  Plus, the game's set-piece moments are truly something to behold.  You'll chase down a speeding, armored train as it barrels through the Saharan desert, infiltrate a nightclub in New Orleans, and freefall off a cliff-side to prevent a woman from falling to her death.  It's breath-taking stuff, to say the least.

Eschewing the first-person-shooter formula found in previous games, Everything or Nothing is a third-person-shooter, and the change in perspective has resulted in a drastic overhaul to combat, gadgets, and the level design.  Just like in modern third-person-shooters, James Bond can crouch behind or stand in front of objects for cover.  To aim at enemies, you hold at L1, which locks on to the nearest foe, and fire away.  A targeting reticule lets you choose where you want to shoot someone once locked on to them.  Truth be told, if you've ever played Grand Theft Auto IV, the aiming system will feel familiar.

Combat's bigger emphasis on using cover means the enemies have received a considerable increase in intelligence and lethality.  No longer are they idiots like in Agent Under Fire.  In that game, their poor intelligence meant you could breeze through missions with tease, even on higher difficulties, not the case here.  Goons in this game will take cover, flank Bond, try to flush him out with grenades, and just do their best to be a nuisance.  They'll even run over and pick up weapons off of dead allies and are even capable of disarming Bond if he's too close.  Adding to the challenge is the revamped health system.  Bullets can take away a lot more health than in prior games, so if you're not careful, death will be swift.  However, making good use of the secret agent's weapons and gadgets can make things easier.


There are a number of guns to acquire in each mission, including pistols, shotguns, submachine guns, assault rifles, sniper rifles, and a rocket launcher for good measure.  Ammo is at a premium, though, and given the increase in challenge, it's best not to run-and-gun.  Later on, a dart gun is added to Bond's arsenal that can knock out foes, but its range and ammo capacity is extremely limited.  This weapon is most useful during stealth sections.  Speaking of which, many levels give you the option to use stealth or do things loud and noisy, except for one level that's an instant mission failure if you get spotted.

Since this is a Bond game, there are gadgets to use.  Gadgets include a grappling hook for climbing walls or rappelling off them, a cloaking device that renders Bond invisible for a short period of time, grenades shaped like coins, a network tap that lets him hack nearby turrets, and Q-spiders.  These small robots can be used to explore what's ahead or reach areas Bond himself can't reach.  The previously mentioned coin grenades come in explosive, strobe, and EMP variants.  Using gadgets is a great way to gain the drop on enemies or to discover hidden goods like ammo and armor.  Bond moments, an in-game achievement system found in Agent Under Fire, is back, and many of the accomplishments are either easy to get or are a bit elaborate to pull off.  For example, in one of the later stages you can send a Q-spider to an area you won't visit until the final level.  If you kill the guard after he opens the door to an armory, it can be accessed later when you're on the last stage.

007: Everything or Nothing is a blast.  The third-person-shooting is great, the levels are a lot more elaborate and filled with plenty of alternate routes, and it's just a thrilling experience from beginning to end, but it's not perfect.  The lock-on system is iffy; sometimes, pressing the lock-on button when a bad guy is near doesn't register or locks on to the wrong target, which is annoying.  The checkpoints aren't evenly spaced out, either, making some of the end-game stages a bit of a hassle to complete since dying puts you back at the beginning of the level.  It's also a short game, not as short as Agent Under Fire, but the campaign will only take four-to-five hours.  Yet, a ranking system in the campaign and local multiplayer, which includes both co-op and competitive options, help extend the game's longevity.

Though the game was released in 2004, it still looks fantastic.  Environments and character models look great, and the scope and size of many locales allows for some breathtaking views.  Sound is also excellent.  As stated before, the voice-acting is top-notch and the cast features many of the actors from the films like Pierce Brosnan and Judi Dench, even Richard Kiel, better known for playing the henchman Jaws, reprises the role, with metal-toothed behemoth acting as Diavolo's right-hand man.  The game's music is also great.  It's cinematic, bombastic, and it keeps things rolling in high gear, and there's even an original song created for this game called "Everything or Nothing" by singer Mya.


As I've said before in plenty of other Bond game reviews, the James Bond series is one of my favorite film franchises of all time.  However, when it comes to video games starring the secret agent, Everything or Nothing is my all-time favorite.  Sure, the story is a bit bonkers, but there's no denying that it sports the high production value of the films, what with its stellar voice cast and visuals.  Fortunately, the developers didn't skimp on the gameplay either.  The switch to third-person means the game is less run-and-gun and puts more of an emphasis on taking cover, but not to the point of making the combat tedious.  A wide arsenal of guns and inventive gadgets helps keep the gameplay fun, as does the varied and frenetic roster of missions.  Some people say Goldeneye 007 is the best Bond game ever, but in my book, it's this game.