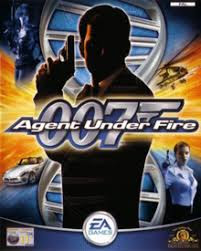 Licensed video games are hit-and-miss.  The idea seems simple, take a popular brand and a make video game both fans of the franchise and the general public will enjoy, but 75 percent of the time, licensed titles are rushed, poorly made experiences that are more of a cash-grab than a genuine effort.  James Bond is one of the lucky few where the good games far outweigh the bad ones.  There have been duds, including 007 Legends and Goldeneye: Rogue Agent, but the rest of them are pretty good, or at least decent.  Is 007: Agent Under Fire a view to a kill, or should we just let it live and let die?

James Bond is dispatched by MI6 to Hong Kong to investigate the whereabouts of CIA agent Zoe Nightshade.  She had been looking into the business practices of Identicon Corporation before she disappeared.  Bond discovers Nightshade is being held captive by the company's CEO, Nigel Block, but he later saves her and the two escape, taking a mysterious briefcase with them.  After fleeing from Bloch's goons, they head to the docks to meet with R, head of MI6's technology department, but just as they arrived, and assassin pulls up and fires a rocket launcher, killing Nightshade and stealing the briefcase.

After retrieving the case from the assassin's henchman, Bond learns the case held blood samples from eight world leaders.  Later in the game, it's revealed Nigel Bloch is working with Malprave, a woman who intends to kidnap the eight world leaders, kill them, and replace them with clones.  Bond also discovers Zoe Nightshade is still alive, and that the one he rescued was a clone.  With the help of MI6 and the CIA, James Bond attempts to thwart Bloch and Malprave's plan before it's too late.


Agent Under Fire's story isn't mind-blowing by any means, but it gets the job done.  It offers everything you would expect from a typical James Bond adventure.   You can expect lots of action, crazy gadgets, fast cars, and equally fast women.  The cast of characters is forgettable, with the exception being James Bond.  He's just as witty, charming, and suave as he is in the films, plus he knows when to deliver a pun-filled quip when needed.  It should be noted the developers didn't have the rights to the likeness or voice of Pierce Brosnan, the actor who played Bond around this time, so they use a generic model who looks an awful lot like Sterling Archer.

Agent Under Fire features twelve levels of shooting, stealth, driving, and explosions galore.  Before you even start playing the game, it's best recommended to change the controls as the default set-up is quite awkward.  The button and control stick placement attempt to mimic Goldeneye 007's controls, albeit on a PlayStation 2 controller, which doesn't work.  Fortunately, additional options allow you to use a more modern set-up.

Each level has a handful of objective for Bond to complete, along with an army of goons to take on.  The game's objectives involve gamers doing things like gather evidence, rescue hostages, or sabotage the villains' schemes.  Some missions require the player to use stealth or non-lethal weapons to take out enemies, and if you're caught or kill someone, it's an instant mission fail.  Fortunately, the game features a slew of firearms and gadgets to get the job done.


Bond can wield pistols, shotguns, machine guns, sniper rifles, and more.  During stealth missions, the secret agent receives a tranquilizer gun with limited ammo.  There's no limit as to how many guns you can pick up, so feel free to amass a huge stockpile.  Bond will also receive gadgets from R to complete objectives and get past obstacles.  Gadgets include a cell-phone outfitted with various devices like a decoder which unlocks doors, a laser-cutter for burning off locks, a camera for taking pictures, and a grappling hook for latching on to vents.  Later missions equip Bond with a jetpack that acts like a super-jump, and when it's out of fuel, you'll have to find fuel stations to refuel it.

Gunplay works well, but it's a bit iffy.  The bullet spread for assault rifles and SMGs is a bit ridiculous, as they can easily spread all over the place if you're not using burst-fire.  Not helping matters is that the game really loves auto-aim, since the reticule will frequently lock on to nearby foes.  Agent Under Fire isn't too challenging, even on higher difficulty levels, making firefights a cinch to complete.  In addition to shooting, Bond will partake in on-rails shooting sections and stages where he drives around the level, blowing up bad guys and accomplishing objectives.  These parts are lots of fun and help spice up the gameplay, and the driving areas feature plenty of opportunities to gain major airtime.

One element that gives the game a bit of uniqueness is its scoring system.  At the end of each mission, the player receives points based on factors like how long it took to complete the mission, number of foes killed, and Bond moments accomplished.  Bond moments are in-game achievements rewarded by doing something James Bond might do.  For example, at the start of the first mission there are two ways to get in.  You can either use the decoder to unlock the door or use the grappling hook to get up to the roof, the latter of which lets you get the drop on a guard and steal his keycard to unlock a weapons armory.

Another way to earn a Bond moment happens at the end of a later level.  In it, Bond finds a submarine, along with Zoe Nightshade.  If you found the sub codes earlier in the stage, he commandeers the sub and shags Nightshade, but if you didn't, the two are knocked out by gas and the next stage starts with them locked in a jail cell.  Agent Under Fire is an enjoyable shooter, but it's also criminally short.  All of the stages take around five to ten minutes to complete, so you can easily beat the game in about three hours.  The ranking system and numerous unlockable extras provide incentive to replay the missions but getting all the bonuses only takes about a couple of hours.  Besides the campaign, there's also split-screen multiplayer, but I wasn't able to test it.


At the time of its release, the game looked decent visually, but it hasn't aged well.  The environments are varied and sport a nice artistic direction, but the graphics themselves look a bit jagged and the frame-rate takes a dip whenever there's too much action going on.  Voice acting is alright, and the music is decent.  It borrows a lot of motifs from the films and gets the job done, with the highlight being the always great Bond theme.

007: Agent Under Fire is a serviceable but competent shooter.  It has all of the elements necessary for a quality shooter, but the whole thing feels routine.  The weapon and gadget selection are varied, and the scoring system provides incentive to replay earlier stages in the pursuit of a better ranking.  However, you're left with a feeling of emptiness due to its short length.  Once the game starts, it's over in a flash.  It's like a dry martini that is neither shaken nor stirred, good enough, but leaves you wanting more.