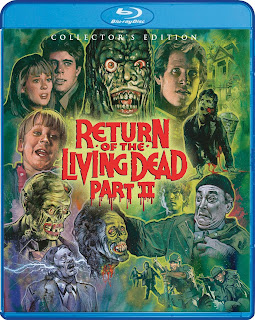 DISCLAIMER: THE BLU-RAY OFFICIALLY RELEASES ON AUGUST 14, A COPY OF THIS FILM WAS OBTAINED IN ADVANCE VIA PRE-ORDER.

You know, I just can't escape this movie.  This marks the third time I've sat down and written a review on Return of the Living Dead Part II.  Last year, I published a pair of reviews covering the first two films in this series.  I'm not proud of them, but I was given another chance to cover the second one when I contributed an article to VHS Revival, which I'll post below.  Whereas my original article was hastily thrown together, I allowed some time to pass before I gestated any opinions on Part II.  I didn't expect to revisit this film again; then, a funny thing happened.

In May of this year, Scream Factory announced they would be putting out Return of the Living Dead Part II Blu-Ray this August, plus, the original soundtrack, absent since its original VHS/Laserdisc release, would be restored.  Two months later, I pre-ordered the film, and on July 29, 2018, it came in the mail.  After years of putting up with the Warner Bros. DVD that replaced the original score and most of the licensed music with synthesizer garbage, fans of the series would finally see this film be done justice.

Due to my history with the first one, I never saw the sequels, at least the second or third entry, for many years until 2017, when I finally snagged a VHS copy of Part II, followed by the infamous DVD in December.  Return of the Living Dead Part II is a mixed bag.  It has some funny moments and inventive zombie gags, but the story retreads familiar ground and the characters aren't as memorable and in certain cases, are carbon copies of ones from before.  James Karen and Thom Mathews return playing a pair of grave robbers, and happened to them in the first happens again.  Though it does lead to a couple of amusing callbacks, the whole ordeal feels lazy, especially since after they become zombies, the two disappear from the film, never to be seen again.  Thankfully, the movie isn't a total loss, and is still a fun watch, despite the problems.

Return of the Living Dead Part II has had a troubled home video history.  Although the VHS and Laserdisc releases kept the original score, composed by J. Peter Robinson, the 2005 DVD release from Warner Bros. swapped out his melodramatic score for cheesy, cartoonish music which didn't fit the film's tone.  Additionally, certain songs were removed, swapped around, or altered to start at a later point than intended.  There's also some ADR heard on the alternate score not present elsewhere.  These changes infuriated fans, and for years, they begged Warner Bros. to do a re-release of the film with the original score.  The frustration of people was best summarized by writer/director Ken Wiederhorn, who, on the DVD commentary said, "There's something wrong with this music.  It sounds familiar, but it sounds misplaced."

This changed in 2018 with Scream Factory's announcement they would be putting out a Collector's Edition Blu-ray.  Besides the original score being restored to its former glory, we get a host of new, interesting special features detailing various aspects of the film's production.

AUDIO & VIDEO
Picture and sound are solid on this release.  Some of the colors and shadows look quite sharp, especially the Lorimar Pictures logo seen before the film begins.  The picture can look hazy at times, most likely because of the camera used, but it's not too distracting.  The restored soundtrack sounds great, and all of the music and songs sound sharp.  Of course, if you want to torture yourself, the alternate audio is available as a secondary option, but there's no point in bothering with it, unless you're listening to the commentary from the prior DVD release.

SPECIAL FEATURES
Like most Scream Factory release, the Return of the Living Dead Part II Blu-ray comes packed with audio commentaries, featurettes, and archival material for people to feast on.  Two new commentaries have been added, one with author Gary Smart and filmmaker Chris Griffiths, and another with actress Suzanne Snyder and Michael Perez, executive producer of More Brains: A Return to the Living Dead documentary from 2011.  Additionally, the commentary with Ken Wiederhorn and Thor van Lingen is also available.  The first one, featuring Smart and Griffiths, is a fun listen.  Whereas Smart grew up watching Part II, Griffiths didn't, so the two have varying opinions on the film.  They also delve into the film's production history and discuss alternate sequels cast members from the first wrote, such as Don Calfa's (Ernie from the original) The Revenge of the Living Dead, which is currently being worked into a graphic novel.

Suzanne Snyder's and Michael Perez's commentary is a good follow-up, as is the one with Wiederhorn and Van Lingen; however, the latter was two separate commentaries weaved together into one, so both are switching back-and-forth throughout.  With the extras, the first one created for this Blu-ray is Back to the Dead: The Effects of Return of the Living Dead Part II, featuring make-up artists Kenny Myers, Andy Schoenberg, and Mike Smithson.  Kenny Myers was put in charge of make-up for The Return of the Living Dead after the original artist, William Munns, was fired from production.  Myers notes that with Part II, he had proper time, crew, and money to get things set up and rolling.

The three discuss the process for creating the zombie make-up and the techniques they used in creating a host of different undead looks with just a handful of actors.  They also highlight certain corpses they created, including the infamous Thriller zombie, which was a throw-it-in moment from Myers and his crew.  Next up is The Laughing Dead: An Interview with Writer/Director Ken Wiederhorn.  This one is quite interesting.  As Wiederhorn notes during the interview, he wasn't a big fan of horror and ended up directing primarily those only just because.  When producer Tom Fox approached him about doing the sequel, he actually reached to Dan O'Bannon to seek his permission, which he agreed to.

However, filming wasn't easy for Wiederhorn.  A tight shooting schedule consisting of mostly night shoots, a worker's strike because of Tom Fox's decision to use a non-union crew, and an on-set accident that resulted in an entire set having to be rebuilt were a few challenges the writer/director faced.  He also notes during post-production, Tom Fox brought in a Russian fellow with little to no experience in composing music to do the score, which was awful.  After Wiederhorn reached out to Lorimar, the studio hired J. Peter Robinson to rescore the film.  It's most likely this particular score is what is heard on the DVD release, meaning Warner Bros. mistakenly obtained the wrong print.

Other new featurettes include an interview with composer J. Peter Robinson and an oh-so-short interview with Troy Fromin, who played the pot-smoking truck driver seen at the beginning.  Lifted from the More Brains DVD is They Won't Stay Dead: A Look at Return of the Living Dead Part II, which features actors James Karen, Thom Mathews, Michael Kenworthy, Suzanne Snyder, and effects artist Kenny Myers, among others.  What makes this documentary unique is the conflicting thoughts on the making of the movie.  Whereas the likes of Kenworthy and Snyder enjoyed their time on it, Karen and Mathews, to name a few, didn't as much.  In fact, Thom Mathews notes his favorite part of the film was crafts services (i.e. catering).  Ouch.  Additionally, there are trailers, still galleries, and an archival "Making Of" featurette available for viewing.

THE VERDICT
Return of the Living Dead Part II isn't exactly an underrated sequel, but it's nowhere near as bad as some make it out to be.  The humor doesn't always hit its mark and though it features two actors from the first one, the movie doesn't do much with them, aside from having the two go through what happened to them before all over again.  Fortunately, when it comes to technical specs and extra features, Scream Factory hits it out of the park with quality picture and audio, as well as a slew of extras, both new and old.  Campy, silly fun, Return of the Living Dead Part II offers goofy humor and is an enjoyable watch.

Posted by William Lowery at 6:24 PM