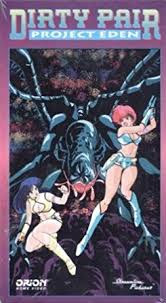 Throughout the decades, the entertainment industry has produced many iconic duos, but what makes a great team-up?  Usually, the two characters must have fleshed out personalities and a sense of camaraderie between one another; without those elements, you just have two dudes or dudettes who do stuff for the sake of getting it done.  From Butch Cassidy and the Sundance Kid to Tango and Cash to Mario and Luigi, there are plenty of iconic team-ups to choose from.  When it comes to anime, no pair is quite as awesome as the Dirty Pair, Kei and Yuri.  At the height of their popularity, the gals received their own motion picture, released in 1986.

Things are going awry on the planet Agerna.  Mysterious attacks at the planet's mining facilities have the two governments who control the planet up in arms.  The planet is rich with Vizorium, a mineral necessary for space travel.  Because of the increasing tension, Kei and Yuri are put on assignment to figure out what's going on.  After running into a criminal whom they failed to capture in the opening prologue, the three are attacked by vicious monsters, who were responsible for the attacks.  The creatures were created by Dr. Wattsman, a mad scientist experimenting with Vizorium with the intent to create a new species to succeed mankind.  Eventually, Kei, Yuri, and Carson find their way to Wattsman's lair, and must put a stop to his plan before it's too late.


Dirty Pair: Project Eden is fun to the nth degree.  The story isn't mind-blowing, but his film isn't here to be a thought-provoking piece.  Instead, this ninety minute film offers up a tour-de-force of creative action, goofy but likable characters, and a pair of good-looking ladies who kill a lot of aliens in skimpy outfits.  Taking on the loony Wattsman are Kei and Yuri, a fiery redhead and long-haired blue beauty whose job is to put an end to life-threatening situations, but often tend to create more destruction than necessary.  Much of the film's comedy involves massive scenes of destruction often caused by a hapless mistake.  Take, for instance, the opening prologue.  Kei and Yuri manage to arrest the head of a Vizorium smuggling operation, but they forgot to take care of the bomb he left behind in the meeting room, which then explodes and causes a chain-reaction that destroys the resort he was hiding out at.

Keep in mind, Kei and Yuri are by no means idiots, it's just that their aggressive nature causes a lot of unintentional consequences and in turn, earned them the nickname "the Dirty Pair."  One thing is for certain, though, the two girls offer plenty of eye candy; after all, their definition of proper attire to wear when busting crooks is a bikini-like outfit.  Although Project Eden plays up the girls' sex appeal, it rightfully avoids going too far with the fan service, but that's not to say there are some titillating moments, like when Kei and Yuri find a bath station while investigating an abandoned Vizorium mining facility, so they hop in and relax, until Carson, a suave thief, accidentally falls in on them.

Speaking of which, the other characters, while light on depth, make up for it through their quirky personalities and bizarre goals.  Carson D. Carson (yes, that's his real name) is a smuggler and somebody who ends up becoming a romantic foil for Kei as the film progresses.  So, why is he on Agerna? Because Wattsman's butler stole a rare bottle of wine from him some time back, and he's been looking for it ever since.  To be fair, there are crazier reasons to risk life and limb, just ask Pee-Wee Herman.  Then there's the bad guy, Dr. Wattsman.  He's the quintessential mad scientist; he's not trying to take over the world, but just wants to perfect his scientific experiment, which is causing trouble for Agerna, unaware to him.  So delusional is this villain that when Kei, Yuri, and Carson end up in his test chamber and awaken a never-ending horde of Vizorium beasts, he believes they're the by-product of his tests, given their impressive combat skills.

It should be noted Dirty Pair: Project Eden takes a lot of inspiration from then-popular films prevalent at the time of its release, particularly aping from the likes of James Bond and Alien.  The strongest indicator of the Bond influence is the film's structure.  The movie begins with an action-packed prologue that sets up plot points and characters who come into play later in the picture, very much like the secret agent series.  After a mesmerizing opening credits sequence, complete with catchy theme tune, the film begins proper.  As for the Alien influence; well, just look at the creature designs.


Project Eden's animation is vibrant, colorful, and, at times, a bit surreal, especially during the opening credits.  Additionally, some of the environmental and background designs are gorgeous to look at.  The dub is a unique case.  Project Eden was licensed to two companies at different points in time, first by Streamline Pictures in the 90's, and then by ADV Films during the 2000's.  Luckily, Nozomi Entertainment's re-release of the movie contains both dubs, in addition to the original Japanese audio.  Of the two dubs, Streamline's is better.  The voice acting is a lot more lively and its helped by the writing, even if some of the lives are a bit cheesy.  Plus, this dub has my personal favorite voice acting pair for Kei and Yuri, Laura Ann Cody and Wendee Lee, out of everyone who's voiced the characters over the years.


Though thin on plot, Dirty Pair: Project Eden offers ample amounts of entertainment for the viewer.  It's campy, doesn't take itself too seriously, and knows what we're here for, lots of action delivered by an ass-kicking pair of women.  Fans of the franchise will no doubt enjoy the Dirty Pair's big-screen adventure, but this is also a great starting-on point for newcomers too.