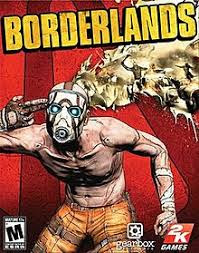 Ever noticed how you can take peanut butter, mix it with something else, and create a concoction that is surprisingly tasty?  I don't, since peanuts are a death sentence for me; regardless, taking two different things and putting them together can lead to surprising results.  In 2009, developer Gearbox Software and publisher 2K released Borderlands, a game which asks what one question: what would happen if you took first-person shooting mechanics and sprinkled in some RPG elements?

In the far-flung future, a group of treasure hunters have come to the planet Pandora in search of a fabled vault.  For years, legend has said those who find the vault will gain access to unlimited power and wealth; yet, no one has dare laid a finger on the planet due to its hostile environment.  Bandits, marauders, and vicious wildlife have turned a once-thriving planet into an arid wasteland.  Yet, the four vault hunters, Roland, Mordecai, Lilith, and Brick, are not deterred by this challenge, and with help from several of the planet's friendlier inhabitants, along with a mysterious AI known as Angel, the gang shall hopefully find the vault and reap the rewards within.

Borderlands is lite on plot and the writing, save for the occasional joke, is purely expositional.  Many of the characters the vault hunters meet act as nothing more than quest-givers, and don't have much to say, outside of reminding them of the end-game goal.  The vault hunters don't fare better either, as they remain silent throughout the adventure, save for the handful of one-liners he or she spouts off during combat.  It's frustrating because very once in a while, the game shows glimpses of what these character can truly be when the comedy comes into play.


Much of the humor is of the darkly comedic type or plays off the eccentricity of the individuals you'll meet on Pandora.  For example, a doctor called Dr. Zed frequently reminds the player he's an unlicensed medical practitioner, while Scooter, a redneck mechanic, talks about how one day he'll find out what exactly second base is.  In one of the DLC add-ons, the vault hunters meet Mad Moxxi, a woman not afraid to express herself, sexually speaking.  However, the true star of Borderlands is Pandora.  Though its look apes much from the Mad Max series and westerns, it lends itself to an interesting look and feel.

Borderlands is a first-person shooter/RPG hybrid where gamers will traverse Pandora, killing bad guys, completing quests to earn XP, and amassing a stockpile weapons so big an NRA member would blush.  When the game begins, you can choose from one of four characters, each of whom has their own special ability and weapon preferences.  Roland is the soldier and specializes in shotguns and assault rifles.  His special power is he can deploy a turret that provides supporting fire and draws enemies' attention away from the player.  He's also the character I played as for this playthrough of the game.  Mordecai prefers sniper rifles and revolvers, and he can send out his pet bird, Bloodwing, to attack foes and collect supplies.  Lilith uses SMG's and repeater pistols, and she is capable of phase-walk.  Phase-walk renders her invisible until she starts attacking again.  Finally, Brick uses rocket launchers and his special power lets unleash a flurry of punches while remaining nearly invincible.

Though each character has their own preferred guns, they can wield any type of weapon in the game, and the more they use a particular firearm, the more this increases their proficiency with said gun.  One of Borderlands' unique features is its randomly generated loot system.  No gun or shield is ever the same, and their quality varies depending on what color of rarity they are and their weapon level.  The colors are white, green, blue, purple, and orange.  White means the item is common and not particularly useful.  Loot marked in green indicates its decent and gets the job done, but blue items are when things start getting good.  Purple indicates the item is rare, while orange-colored goods are the rarest items to find and are also the most expensive.  Orange-rare loot is quite powerful, usually having stats far higher than those of other gear.


Loot can be found by scavenging junk piles, finding treasure chests, killing enemies and bosses, and completing quests.  An inventory system lets you stockpile everything you've found.  To increase inventory space, you must find and repair broken claptraps, robots which act as tour guides to Pandora.  If you're carrying too much stuff, you can sell items at any of the vending machines scattered about the planet or you can drop the items all-together.  The DLC "Mad Moxxi's Underdome Riot" adds a storage system, letting you store items away for safekeeping.

As the vault hunters travel the wastelands of Pandora, they'll complete story quests and optional side missions given to them by a host of different characters.  Story missions are quite lengthy and will be how you reach new areas in the game.  These quests have you tracking down another piece of the vault key, garnering the trust of a person, or finding someone of interest.  Side missions involve collecting X number of items, activating a particular number of switches, or killing a high-powered target.  All missions reward XP, as well as cash and additional goods like a gun, shield, or class mod.  When enough experience is earned, your character levels up and a skill point is earned.  Skill points can be put towards one of three skill trees and putting enough into a particular branch unlocks more skills to acquire.  Cash can be used to buy new stuff.

Pandora is a planet filled with all sorts of life, both human and animalistic, waiting to kill you.  The local wildlife includes skags, dog-like creatures that can pounce the player or use their long tongues to attack, rakks, winged creatures that are easy to kill but use their numbers to overwhelm the vault hunter, plus spider-ants, scythids, and giant enemy crabs.  Human enemies include bandits, psychos, brutes, and the Crimson Raiders, a PMC group also looking for the vault.  The DLC campaigns introduce new enemy types to contend with, including zombies, new types of Crimson Raider soldiers, and Claptraps.  A baddies' difficulty depends on their current level, and as you venture into uncharted territory, it's best to make sure you do as many side quests as possible, or you might be in for a challenge.

Borderlands can be an immensely enjoyable experience; there's something thrilling about searching Pandora in search of loot and danger and finding new ways to kill things or make your vault hunter better is quite fun; yet, it's far from perfect.  The biggest problem is its repetition.  The limited variety of mission types means playing the game can get tiresome, especially during long play sessions.  Also, the lack of proper balancing in how much experience is earned by completing quests means it's possible for your character to reach a position where challenge is trivialized as he or she is capable of killing everything in sight.

Borderlands utilizes a cel-shaded art style to bring the world of Pandora to life, and it gives the trashy, desert landscape some personality.  However, the limited color palette consisting of nothing but brown, grey, beige, and green does make the locales a bit dreary to look at.  Secondly, the physics can get a bit wacky, resulting in dead enemies getting stuck on walls or your vehicle flipping over from just . a small bump in the road.  Sound is a mixed bag.  The guns sound great and pack a punch, but the voice acting is fine, to say the least.  Depending on the character, they might sound decent, or like they're phoning it in due to their monotone deliveries.  Luckily, the music fares better.  The ambient tunes enhance the game's "cowboy in space" attitude, as does the titular song, "Ain't No Rest for the Wicked" by Cage the Elephant.

Borderlands' greatest strength is its gameplay.  The mixture of first-person-shooting and RPG elements works tremendously well, and it's quite satisfying to kill some bad guys, find some loot, and earn a little experience to make your character stronger and deadlier.  Yet, the plot holding it all together is barebones and does little to hold your attention, as do the characters, who show glimpses of an interesting personality, but it's buried beneath walls of quest ext.  Also, play the game long enough, and things might get a bit tedious.  Still, when everything's in place, Borderlands can be a thrilling experience.