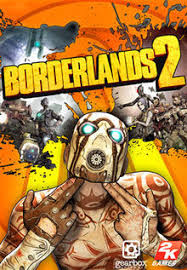 Growing up, I never had access to M-rated games.  Since my parents were overly decisive on what I could or could not play, I was deprived of amazing titles such as Grand Theft Auto, Saints Row, Dead Rising, most of the Call of Duty franchise, and more for most of my life.  That all changed when I turned seventeen, and after receiving a ton of money and gift cards for Christmas in 2013, I went nuts, to say the least.  I bought M-rated titles left and right, and amongst my purchases were Borderlands and Borderlands 2.  I became obsessed over the two games and played them religiously the following year.  Now, it's 2018, and I've found myself revisiting this series after all of these years to see if they're as good as I remember them to be.  I already have the first game under my belt, so let's take a look at Borderlands 2.

At the end of the first Borderlands, the vault hunters discovered the vault; unfortunately, instead of becoming wealthy and all-powerful, they got to kill a giant space-squid.  Disappointed, they went their separate ways.  In the aftermath of this discovery, a mysterious element known as Eridium starts appearing around the planet, causing environmental and climate changes to take place.  Handsome Jack, CEO of the Hyperion Corporation, sets up various mining facilities on Pandora to harvest Eridium and more importantly, find another vault hidden somewhere on Pandora.

This vault houses a beast called the Warrior, which he wants to control so he can eradicate all life on the planet and build anew.  To summon the Warrior, he needs the pieces of the vault key, and more importantly, vault hunters to find them.  Handsome Jack lures a group of vault hunters, consisting of Axton, Maya, Salvador, and Zero, to Pandora, but after getting double crossed and left for dead, the vault hunters begin searching for the original vault hunters, so they can work together and stop Handsome Jack's evil plan.

When it comes to the writing, storytelling, and character development, Borderlands 2 trumps its predecessor in every conceivable way.  Gone is the threadbare plot with occasional glimpses of something better; instead, we have a story that's interesting, funny, and even a little emotional.  The characters are twisted, bizarre, yet weirdly likable, and the villain is quite possibly one of the best antagonists in gaming history.  It's also very funny, rather than deliver the occasional joke or two, the game goes all out with the humor, featuring lots of black comedy and satire.  Some of the references, especially to then popular internet memes, date the game somewhat.  Seeing a "Double Rainbow" Easter egg back in 2012 might have been amusing, but now it's irrelevant due to the constantly shifting nature of internet culture.


As alluded to before, the writing does a great job at expanding upon the world of Pandora and the people who inhabit it.  The likes of Dr. Zed, Scooter, Marcus, Moxxi, and more return, and although they still act as quest-givers, they frequently interact with the player during and outside of missions.  Plus, the original vault hunters are no longer blank slates.  By splitting them up and having each one pursue their own goals, it allows us to see how much they've changed.  Roland is in charge of a resistance fighting back against Handsome Jack, with Mordecai acting as his wingman, scouting out locations of interest while keeping himself in isolation.  Brick is in charge of a local bandit clan and goes by the name Slab King.  Finally, Lilith has gone into hiding, assuming the alias of Firehawk and using her phase-walk powers to keep people away.

It's impressive how far these characters have come since the first, and what happens to them as the plot unfolds is quite surprising, to say the least.  Disappointingly, the new vault hunters are largely silent protagonists, but audio logs scattered around Pandora provide backstory as to where they came from and how they ended up on the planet.  However, the real show-stealer isn't any of the good guys, but the villain, Handsome Jack.

Jack is the CEO of Hyperion and an all-around douchebag.  Throughout the game, he frequently chats with the vault hunters, taunting them at every turn and reminding them of his evil plan.  Some of his dialogue is quite morbid; in one scene, Jack tells the vault hunter how when his robots were tearing apart a village, a man came at him with a spoon, trying to kill him.  Jack retaliates by grabbing the spoon, and proceeding to gouge the man's eyes out, while his children watch.  Did I mention he's trying his best not to laugh while recounting this tale?  Weirdly though, you understand his reasoning for why he wants to destroy all life on Pandora.  This is a planet teeming with bandits, murderers, and people motivated purely by greed, so by unleashing the Warrior, he's actually doing the planet a favor.

Conceptually, Borderlands 2 is similar to its predecessor.  This is still a first-person-shooter/RPG loot and shoot-fest where you'll kill marauders and other nasties while finding new and hopefully powerful gear to make your character better, but many of the gameplay mechanics have been overhauled, tweaked, and refined to the point the gameplay is a lot more satisfying than its predecessor.  When the game begins, you can choose from one of four characters, six if you have the DLC.  These are Axton, Maya, Zero, Salvador, Gaige, and Krieg.  Like Roland, Axton is the soldier, capable of deploying a turret to assist him during combat.  Maya is a Siren, just like Lilith, but instead of using phase-walk, she uses phase-lock, a telekinetic orb that holds bad guys in place.

Zero is a cyborg ninja and he is able to become invisible, creating a decoy to distract foes and sneak up on them for an attack.  Salvador is the Gunzerker; instead of using his fists, he dual wields weapons, no matter what type they are, and he is nigh-invulnerable.  Gaige can summon a robot to help her out, and Krieg's ability is reminiscent of Brick's in that he becomes nearly-invincible but pulls out a massive, bladed club to unleash the pain.  For this playthrough, I played as Axton.


To stop Handsome Jack, you'll traverse the varied landscapes of Pandora, killing all manner of wildlife, bandits and Jack's never-ending supply of robots while completing quests and earning experience to level up.  In the first Borderlands, the quests were generally repetitive, consisting of nothing but fetching items or activating a certain number of panels or valves.  Although the sequel does have you doing such tasks, the overall variety of things to do has been greatly increased, and frequent dialogue exchanges makes completing missions all the more satisfying.  May of the side missions feature their own overarching stories; for example, one series of side-quests has you setting up a clan war between the Irish Zafords and redneck Hodunks, and in the concluding mission, you'll pick a side and take on the opposing forces.

Other side missions play up the game's satire, such as a mission where you travel down to the sewers to deliver pizzas to four brothers who are fans of ninjutsu.  Plus, some give you the option of choosing who you want to turn in to, which will grant you a different reward.  All missions still reward the player with experience, as well as cash, a weapon, or a shield, but there's also a new currency called Eridium.  Eridium crystals are used to upgrade your capacity for things like inventory, ammo, and storage space.  Indeed, the storage system from "Mad Moxxi's Underdome Riot" has been implemented into the sequel, making it a lot easier to store away valuable loot for safekeeping.

Speaking of which, Borderlands 2 carries on the tradition of offering a s*itload of guns and other equipment for the player to find and use.  The rarity scale remains unchanged, but a new color, cyan, has been added.  Cyan-rare items are extremely hard to find but are the cream of the crop when it comes to quality gear.  Of course, there are also vending machines scattered about that allow you to buy items and sell gear.  The guns themselves are more visually identifiable as each manufacturing company has their own specialties.  Dahl weapons utilize burst-fire when you zoom in on the sights, while Hyperion guns increase in accuracy the more you fire them.  Bandit-brand firearms trade large bullet counts over accuracy, Maliwan utilizes elements such as fire and electricity, while Jakobs guns are old-fashioned in look and function, and Torgue weapons fire explosive rounds.

Of course, you need enemies to use your newly-acquired guns on, and the game features many returning enemy types, plus a slew of new ones.  You'll fight bandits, psychos and brutes, plus contend with vicious skag, rakk, and spider-ants, but there are also now bully-mongs, gorilla-esque creatures with large bodies but tiny heads, and varkid, which start as harmless larva but can go into cocoons and hatch as tougher flying variants.  Bandits are now joined by nomads, who wield a shield to protect themselves from weapons fire, and goliaths.  Goliaths wear helmets, which, when shot off, enrages them, making them attack anyone nearby.  The catch is that the more carnage it creates, the stronger it gets.  Then, there are Handsome Jack's Hyperion forces.  He has an army of robots and drones, plus mercenaries fitted with robotic equipment.


By killing enemies and bosses, as well as completing quests and discovering new locations, you'll earn experience, and in turn, level up.  Skill points can go to a character's skill tree, offering up new skills bettering their abilities or combat prowess.  By putting points into Axton's turret, I was able to turn it into an accurate, rapid-firing device capable of teleporting to its location and unleashing a hail of bullets and rockets, which, when combined with a skill that increases his rate of fire for a few seconds, turned him into an unstoppable killing machine.  Luckily, the amount of experience earned from beating missions has been balanced out, so you can't go up five levels and trivialize the immediate threat.

Borderlands 2 is wholly satisfying on the gameplay front.  Many of the game's issues, both major and minor, have been ironed out; on that note, the visuals have received an upgrade.  Gone are the drab, rundown but stylized environments; instead, you're treated to snowy landscapes, lush fields, arid deserts, burning volcanoes, and an industrial megalopolis under construction.  It's colorful and very pleasing to the eye.  The voice acting is also a step-up from before.  Everyone does a fantastic job and much of the dialogue is hilarious yet quotable; meanwhile, the music carries on the motifs established in the original, but incorporates a host of new themes designed to reflect the environment your character is currently in.

Borderlands 2 is a fantastic sequel.  The set-up is the same, but everything under the hood has been overhauled tremendously.  Gone is the non-existent story and in its place is a hilarious but thrilling narrative featuring a fantastic villain, and the gameplay, while similar in style, is smoother, very hectic, and immensely satisfying.  Quests are no longer repetitive grinds and are actually worth playing through, both for collecting the end-mission rewards and to hear more of the funny dialogue.  Pandora may be filled to the brim with all sorts of nasties, but it also makes for a heck of a good time.