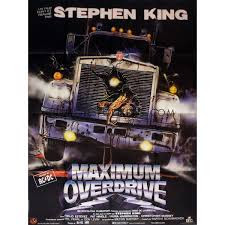 Stephen King is one of the greatest writers of our time.  He's a man who can craft stories which can scare us or get us emotionally involved, but it's generally the former.  From the Stand to Carrie to The Shining, Stephen King is arguably one of the best things to come out of Maine.  Due to his popularity, Hollywood has adapted a majority of his works into popular films and mini-series, all of which have been handled by people other than King himself, so why shouldn't one of the masters of writing be able to make a movie of his own?  Based on the short story "Trucks," Maximum Overdrive follows a group of people forcibly trapped in a diner when machines around them start coming to life.

It's an average day in Wilmington, North Carolina when unusual events begin to take place.  Banners outside banks start to project the words "Fuck you" on their display, and during rush-hour, a drawbridge raises up for no reason, causing a major pile-up and multiple deaths.  Soon, reports start coming in from around the world about technology coming to life and causing havoc.  Elsewhere, the patrons at a truck-stop called the Dixie Boy begin experiencing strange activity of their own.  An electrical knife turns on and slices into a waitress, while the arcade machines go haywire, electrocuting a man inside the room.

These events are strange enough, but then the trucks outside start driving around on their own, killing anybody in their path, including a mechanic, who lost his eyesight after gasoline sprayed in his face earlier.  Afterwards, a traveling salesman (Christopher Murray) and a hitchhiker (Laura Harrington) show up at the station, along with a newlywed couple (John Short and Yeardley Smith) who arrive after hearing the reports and getting chased down by a tow truck.  Surrounded by all ends by an encircling ring of big rigs, the men and women trapped at the Dixie Boy must find a way to survive.


Sentient eighteen-wheelers that mow down anything that get in their way!  Steamrollers flattening boys at a baseball game!  Arcade machines using their hypnotic imagery to mesmerize people, before electrocuting them!  Maximum Overdrive is a gonzo movie, to say the least.  Writer/director Stephen King takes the vehicle-with-its-own-mind concept from his book Christine and cranks it up to eleven, adding a healthy dose of AC/DC to go along with the mayhem.  By no means a masterpiece, Maximum Overdrive is B-movie filmmaking at its finest.  The story lacks logic and the characters are one-note, but the inventive carnage the trucks and other devices deliver keeps things rolling.

Trapped in the Dixie Boy is a cast that's one-half cannon fodder and another half forgettable.  The leader of the civilians is Bill Robinson (Emilio Estevez), an ex-con who works at the diner and has all of the enthusiasm of someone who just woke up out of bed only to realize it's Monday.  His rebellious attitude and stoic expressions make it feel like Estevez is just playing a poor-man's version of his character Otto from Repo Man, and whereas Otto's punk behavior and character growth made him interesting to watch, Bill is nothing more than the reluctant leader.

Other characters, including the hitchhiker turned love interest Brett and the obnoxiously southern owner of the Dixie Boy Bubba (Pat Hingle) do nothing more than either advance the story, get into a situation where he or she needs to be rescued, or ends up becoming a victim of the machines.  Stephen King has shown us he can create interesting and even memorable primary and secondary characters, as seen in the likes of It, Christine, and Cujo, but that's not the case here.  In fact, Maximum Overdrive was made during a period in his life where he was battling a drug and alcohol addiction.  Reflecting on the making of the movie, King said:

"The problem with that film is that I was coked out of my mind all through its production, and I really didn't know what I was doing [as the director of the film].  I learned a lot from the experience, however, and I would like to try directing again some time."


Looking past his personal battles, this is still a wild, riotous picture.  After all, where else can you see a movie where a man is killed by an onslaught of soda cans, or a truck with a giant mock-up of the Green Goblin from Spider-Man runs down people?  Though flawed in the storytelling department, Maximum Overdrive makes up for it through its inventive carnage and crazy situations.  After the droll middle act attempts to provide character development, things pick back up when an army jeep with a .50-cal machine-gun and a bulldozer roll into the station.  The jeep opens fire, killing many of the people inside, before it's revealed this part of a plan to get the trucks gas.  They're machines, after all, so they need fuel, and without any humans to fill them up, they'll run dry.

However, the logic behind the sentient technology, not to mention certain story elements, leads to numerous plot holes.  The initial explanation given for the rise of the machines is because of a passing comet, but a text crawl at the end reveals it might have been the result of a UFO blown up by a nuclear-equipped Russian satellite.  Yet, it appears not all machines are affected by the unknown energy.  Big-rigs, ice-cream trucks, soda machines, drive-in speakers, and planes have a mind of their own, but other devices like everyday station-wagons and motorboats appear to be unaffected.  Plus, if the gun on the military jeep has a mind of its own, how come the guns stored away in the diner aren't firing off on their own?

There's a throwaway explanation heard over the radio which explains some machines aren't coming t life as quickly as others, but it seems conveniently beneficial to the characters.  Another issue, and this is a big one, is this: why didn't the characters try escaping earlier?  It's revealed the gas station's sewer line leads to the main road when a few of them head out to try and save the salesman, who was knocked into a ditch earlier by one of the trucks.  So, why bother rescuing him if they can's just group up, and get out of Dodge?


Maximum Overdrive uses clever camerawork to hide the stunt-men driving the cars and piloting other machinery, and it works fairly well, but that's a hill of beans compared to Maximum Overdrive's other greatest quality, the soundtrack.  In what is possibly the greatest decision ever made, the music was done by none other than AC/DC.  The film features four songs by the legendary music band, including "For Those About to Rock (We Salute You)," "Hell's Bell's," and "Who Made Who?" which also doubles as the theme song.  There's also a lot of ambient guitar riffs heard throughout the film's quieter moments, but the cheesy, poor-man's cover of the Psycho theme that plays whenever somebody gets killed is laughably bad.

Stupid yet very entertaining, Maximum Overdrive is certainly no Shawshank Redemption or The Green Mile, but in the end, the fun vehicular mayhem and rocking soundtrack triumph over the film's multiple flaws.  The director may have been high as a kite, but the result is an energetic, B-movie experience where trucks and other machinery kill people, and the audience cheers at the sight of such moments.  Plus, when said carnage is played next to AC/DC, what's not to love?

Stephen King Quote: https://books.google.com/books?id=mKcFPL4Vn0IC&pg=PA20#v=onepage&q&f=false
Posted by William Lowery at 10:29 AM