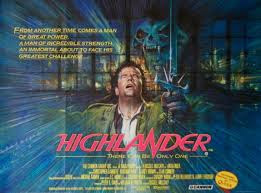 If you could have one superpower, what would it be and why?  Ask anyone this and their answers will vary.  Some might want the ability to fly, others the power to shoot beams from their eyes.  Then, there are those who would wish to be invulnerable, unable to die no matter what.  After all, Wolverine from the X-Men has shown us being able to shrug off bullets and anything else thrown at you can be greatly beneficial.  Yet, if you think about it, immortality is both a blessing and a curse.  You can't die, but loved ones can; soon, they'll get old and pass away, while you'll still be alive and kicking.  Released in 1986, Highlander tells the tale of Connor MacLeod, a 400-year-old immortal from Scotland unable to die and caught up in a mystical competition where other immortals fight to gain control of the Prize.

At a wrestling match in New York is Connor MacLeod (Christopher Lambert), but he's not there to watch the event, as he is on the hunt for someone.  His senses kick up, and MacLeod goes into the parking garage where he encounters a man.  The two draw swords and partake in a heated battle.  Connor succeeds, decapitating the man, which releases a mysterious energy from the deceased individual.  Connor absorbs his essence while all the surrounding automobiles and other electrical equipment go haywire.  The fierce sword-fight draws the attention of the New York police, who show up at the arena and arrest MacLeod for the supposed murder.

Then, the film flashes back to 1536.  In Scotland, the MacLeod clan, led by Connor, is gearing up for battle against the Fraser clan.  Unbeknownst to them, the Frasers have hired a mysterious warrior named the Kurgan (Clancy Brown) to take out Connor.  During the battle, the Kurgan finds Connor, and stabs him through the stomach, but before he can finish him off, the Kurgan is swarmed by allies of MacLeod.  Sadly, Connor dies from his wound and is laid to rest, or so the clan thinks.  The next day, he walks into the local pub alive and well, even though everybody saw his corpse the day prior.  Thinking this is the work of black magic, Connor is tied up, beaten by the villagers, and banished from his clan, never to return.  Eventually, Connor starts over, working as a blacksmith in the Highlands and living with his new wife Heather (Beatie Edney).


While having luncher with her, a Spaniard, Juan Sanchez Ramirez (Sean Connery), shows up out of nowhere and greets the two.  Ramirez explains to Connor that they are part of a group of people born with immortality, which is lost whenever their head is decapitated.  All surviving immortals will eventually be drawn together to participate in an event called the Gathering, and the last one standing is granted with a mysterious power called the Prize.  So, Ramirez trains Connor for this fateful day.  Back in the present, the Kurgan manages to find MacLeod in New York.  By eliminating the remaining immortals, only Connor and him will remain, and in the end, there can only be one.

Highlander is a unique film.  Beneath the sword-fighting, awesome soundtrack, and memorable characters lies an interesting and slightly emotional take on the idea of immortality.  For over four hundred years, Connor has lived through multiple time periods, amassing a large sum of wealth in the process.  A running sub-plot sees a forensics expert, Brenda (Roxanne Hart), investigating MacLeod and figuring out who he really is.  Due to his special gift, Connor has lived under numerous false identities, so no one will discover the truth.  He does this by faking his death and taking the names of children who died at birth.

His secret nature, combined with his resentment to show care to others, helps shape him into an interesting protagonist.  After meeting Ramirez, the two have a discussion regarding Connor's wife Heather, and Ramirez tells him he should not become emotionally attached to her since Ramirez had also been attracted to a woman who grew old and died.  Thus, when the same happens to Heather, MacLeod makes sure to never fall in love again, until he meets Brenda.  However, Christopher Lambert's acting is spotty.  Keep in mind, this is a Scottish man being played by a Frenchman who at the time of filming, barely knew any English.  As a result, some of Lambert's line deliveries are shaky, to say the least, but if you think about it, the unusual voice, in a way, makes sense since the character has lived for 400 years and in different parts of the world, so his accent would have fluctuated all over the place during that time.


Next is Ramirez.  Imagine James Bond as a flamboyant Spaniard who's really an Egyptian, and you have Ramirez.  Sean Connery plays the role of the mentor who trains and prepares the lesser-experienced individual with the right amount of fun and wit.  His interactions with MacLeod are some of the best moments in Highlander, and although he delves slightly into the history of the immortals, Ramirez never flat out explains where this power comes from, something Highlander II: The Quickening royally screws up.

For every good guy, there's a bad guy, and in the case of Highlander, it's the Kurgan.  He's a brute, and an intimidating one at that.  The Kurgan vanquishes anyone who gets in his way, immortal or otherwise, and you can tell he enjoys terrorizing innocents and just being an anarchist.  Clancy Brown, better known for playing Mr. Krabs in SpongeBob SquarePants, is fun to watch as he hams it up, but not to the point his villain comes off as cartoonish.

Aesthetically, Highlander features great cinematography, with nice camerawork and inventive transitions.  The film's director, Russell Mulcahy, directed music videos before doing Highlander, and the way the movie is shot feels like you're experiencing a big-budget music video.  During the fight scenes, the camera moves all over the place to emphasize the kinetic energy of the sword fights.  Plus, a lot of tracking shots are used where the camera follows the person as he or she walks down a street, alleyway, or corridor.  The movie also features clever transition sequences used most effectively when switching from the past to the present or vice versa.  For example, after Connor is banished from his village and left wandering the Highlands of Scotland, he eventually stops, looks at the camera, and the film fades into a wall mural of the Mona Lisa in present-day New York.

Meanwhile, the music is great.  Though famous for songs like "We Will Rock You," "Bohemian Rhapsody," and "Killer Queen," Queen will always be known, for me personally, for their work on Highlander.  The band contributed multiple songs to the film, including "Princes of the Universe," which is heard during the opening credits, and when the tune kicks in, you get a huge adrenaline rush.  Other songs they contributed include "A Kind of Magic" and "Who Wants to Live Forever."  There's also a brief cover of "New York, New York" that plays during a hit-and-run rampage the Kurgan goes on, which makes me wish there was a full version of the tune.  However, the film's orchestral score, composed by Michael Kamen, is equally superb.  The grand and occasionally somber feel of the music works well during many pivotal scenes, such as Heather's death.


Highlander's interesting premise helps elevate the picture into cult classic territory, and the movie is one of, if not, the best hidden gems of the 1980's.  The story is great, as are the characters, namely Connor, Ramirez, and the Kurgan.  Though his performance is rough-around-the-edges, Christopher Lambert is good as the stoic, mysterious, yet likable Connor MacLeod, while Sean Connery delights as Ramirez.  Plus, the amazing soundtrack by Queen and Michael Kamen only increases Highlander's likability and fun as a unique and thrilling fantasy film.