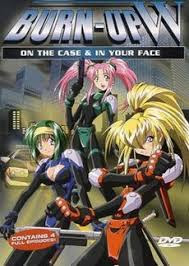 Being a critic is no easy task.  Although reviewers can cover as much quality content as they want, there's the looming fact that if we ignore the bad stuff, it can problem if there's too much junk out there.  Yet, every once in a while, comes along a diamond-in-the-rough.  A title, which, while not perfect, is still an enjoyable time, such is Burn-Up W.  After the middling Burn-Up and the abysmal Burn-Up Scramble, the franchise finally finds its footing with this fun but flawed entry.  Besides, compared to the other two, this one's Citizen Kane.

Burn-Up W follows the Warrior team, a private sector of the Tokyo police force who specializes in high-risk operations the regular police can't handle.  The primary core of the team consists of Rio, a hot-headed blonde who prefers hunting down bad guys then filing paperwork and trying to pay the bills, Lilica, the team's hacker and technology expert, and Maya, a gun-nut who tends to use excessive force when stopping crooks.  Other members include Yuji, the only male member of the group who also has a crush on Rio, and Nanvel Candlestick, who is in charge of weapons' development.  Led by Maki (no relation to the one from Burn-Up), the Warriors protect the city at all costs.

On a hot, sunny day in Tokyo, terrorists take over a hotel and hold the entire place hostage.  The situation is a cover for Miss Ruby, who's attempting to sell a VR device capable of deteriorating the mind through an epileptic drug; in other words, the Oculus Rift on LSD.  She uses the government representatives staying at the hotel as guinea pigs, but when the Warrior team rescues the hostages and arrests the supposed criminals, Ruby escapes.  During a police raid, her technology is confiscated and taken back to the police headquarters for examination; therefore, she sends out a pair of heavily armored henchman to attack the station while a corrupt cop keeps the building on lockdown, making sure no outside forces can get in.  Little do the bad guys know that the Warrior team is trapped inside with them, so they gear up and head out to take on the terrorists and stop Miss Ruby's reign of terror.

Whereas Burn-Up struggled to create its own identity and felt more like a poor man's copycat of similarly-themed titles, Burn-Up W hits its stride as a fun, campy, action-comedy show.  The leading ladies here fare better than the trio from Burn-Up since they're given a lot more to do.  Even the side characters, who were severely underutilized before, get their chance to shine.  Rio, Burn-Up W's take on Maki, is not just a fiery woman concerned with delivering justice, but someone who thinks the job is the only thing keeping her from living on the streets since she's in massive debt.  Lilica, the team's hacker, plays a more active role on the squad than Yuka ever did, since she never finds herself captured or forced off to the sidelines.

However, there isn't much to Maya's character, other than she obsesses over guns, but this quirk of hers helps build up to a fight scene in the final episode between her and one of the goons, who is equipped with a high-powered mini-gun.  To fight off the terrorist, Maya uses an armor-piercing shotgun.  It should also be noted Burn-Up W clearly identifies this team as their own independent unit; in Burn-Up, there was nothing special about the job positions any of the characters had since they all worked for the same police force; here, it's made clear the Warrior team does things by their own rules.


Though the secondary characters like Yuji and Maki are also likable, the villain is not.  Much like Samuel McCoy, Miss Ruby isn't given much to do.  Her and the Warrior team never face off; instead, she works behind-the-scenes while her lackeys unleash the chaos.  Not helping matters is the show's ending, or lack thereof.  After the Warrior team thwarts the attack on the police headquarters, Ruby escapes, again, and the show ends on an unsatisfying cliffhanger.  I'm not sure what Burn-Up's deal is with lackluster endings, but it's a case example of bad storytelling.  Although a sequel, Burn-Up Excess, continued the story, you shouldn't have to track down another entry just to see what happens next.

Burn-Up W also suffers from tonal whiplash, and the final two episodes take things a bit too seriously.  In episode three, the viewer is introduced to a friend of Rio's who helps her with her financial problems.  No less than five minutes later, and a man, under the influence of Miss Ruby's drug, goes on a shooting rampage, killing multiple officers, including Rio's friend.  This gives her a personal reason to stop the later attack on the police headquarters.  Additionally, the second episode is pointless, to say the least.  The plot sees the Warrior team tracking down an artificial intelligence which escapes from the virtual world and into ours.  Aside from a couple of moments featuring Ruby, the impact this episode leaves is inconsequential.

As stated prior, Burn-Up W is campy, fun, mostly, but the increase in comedy and fan-service leads to mixed results.  Don't expect random references to then-popular franchises this time like before, but expect to see plenty of women in skin-tight outfits and occasional bits of T&A.  For example, in the first episode, one of the thugs' demands is that a popular singer bungie jump from a helicopter naked.  The singer won't do it, so Rio has to do it, and everybody, from the criminals in the building to the cops down below, is in sheer awe of this crazy stunt.  The usage of fan-service is reminiscent of Onechanbara: Z2 Chaos.  It's a bit tacky and not for everyone, but in a way, it enhances the charm of the show.


Burn-Up W's animation style is a lot easier on the eyes.  Gone is the cutesy look of the characters and in its place a freeform, exaggerated art style reminiscent of other shows from around this time like Dirty Pair Flash and Outlaw Star.  As strange as this sounds, though, there are loads of grammatical errors throughout the show, and this isn't a translation error on ADV Films' behalf.  The most heinous one is a robot called El Heggunte instead of El Gigante.  Also, this robot, a creation of Nanvel's, looks an awful lot like Unit 01 from Evangelion.  Homage or plagiarism?  You decide.  Meanwhile, the dub, produced by ADV Films, is leagues better than the one heard in Burn-Up.  It's not great; the dialogue is littered with lame jokes and random pop-culture references much like the previous installment, but you can tell the actors are having a lot fun with the characters, even if Yuka's voice is as grating as hell.

Though not a masterpiece by any means, Burn-Up W is an enjoyable time.  It's fun, features some laughs, and the characters are entertaining, but the villain is cart blanche and the anime ends on an unsatisfying note.  Still, this is leagues better than the subpar Burn-Up and Burn-Up Scramble combined.  Finally, the franchise has an entry it can call decent.