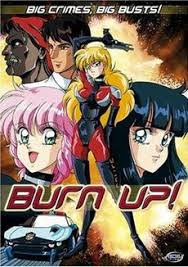 Three years ago, I wrote an article loosely centered around an anime called Burn-Up Scramble.  Though primarily a discussion about the advantages and disadvantages of going in blind on something you've never heard of, the article came about because of the troubling experiences I had with this anime.  A twelve-episode piece of junk, Burn-Up Scramble was a miserable experience, to say the least.  Although I was aware the series was part of a long-running franchise, I had no desire to seek out the other entries, until now.  Last year, I picked up the original Burn-Up and its successor, Burn-Up W, and after watching them both, only one question remains: Are the two anime at least better than Burn-Up Scramble?

Burn-Up follows Maki, Yuka, and Reimi, three female police officers who work for the police in near-future Japan.  Unfortunately, they tend to spend their days filing paperwork, but as members of the police's tactical division, they also get the chance to bust the crooks.  During one such crim, the police thwart a kidnapping, only to find out the assailants have connections to Samuel McCoy, a millionaire who runs a chain of nightclubs and restaurants across the city.  In actuality, the businesses are a front for McCoy's sex slave operations, but the cops need evidence before they can do anything about it, so Maki, Yuka, and Reimi are put on assignment.


During their investigations, Yuka, a computer expert, is kidnapped.  Maki and Reimi try to save her but fail.  Despite this, the two aren't allowed to go after Samuel McCoy, due to a lack of evidence and because of his political connections to the city.  Therefore, Maki and Reimi suit up and head out on their own to stop McCoy and save all of the women he's kidnapped, including Yuka.

Good news, Burn-Up is not a train-wreck like Burn-Up Scramble.  The bad news, it's not good.  A generic, by-the-numbers action anime, Burn-Up is derivative, lacks personality, and is so short, the whole experience feels pointless.  The anime feels like an episode of a show that should exist, but doesn't, and instead of doing something interesting with its characters, style, or tone, the anime is paint-by-the-numbers.  Similar to other shows such as Dirty Pair or Bubblegum Crisis, Burn-Up features plenty of action, ass-kicking females, and mild fan-service, but the leading ladies of this affair lack personality and all feel the same.

First, there's Maki.  She's a gung-ho officer with a tendency to shoot first and ask questions later, and that's about it.  Aside from a romance with one of her male co-workers, she doesn't have much else to offer.  Next is Yuka, the tech-head of the trio.  She's good with computers, but we never see her skills get put to use since Yuka spends most of the anime in captivity.  Lastly, there's Reimi.  Like Maki, she's a bit of a loose cannon, and that's it.  The only glimpse given into her personality is she doesn't like it when others destroy her equipment.  Case in point, when her and Maki launch their attack on McCoy's mansion, her map device is destroyed during a firefight.  This enrages her, and she shoots the heck out of the goon responsible in what is one of the anime's few funny points.


Other members of the force, including Kenji and Banba, are equally insignificant.  Kenji is Maki's boyfriend, and though the anime alludes to him being a hapless romantic, it's just a tease.  On the other hand, Banba, a tall, black man who has a penchant for appearing unannounced and surprising the others, is nothing more than a bad running joke.  It's a shame too, because these characters had potential, but the writing nor the story gives them much to do, especially Samuel McCoy.  Though responsible for the horrendous crime of sex trafficking, Samuel McCoy is just as disposable as the rest of the cast.  His only purpose in the story is to be the bad guy, and nothing more.  Worse, he doesn't even have an epic confrontation with Maki and Reimi; instead, he's captured, and the anime ends with Maki saying, "And that's that."

One thing Burn-Up has going for it is its portrayal of near-future Japan, which is littered with numerous visual and audio references to franchises popular around the time of the anime's release.  For example, the police cars look like the dropships from Aliens if the wings didn't come out, and you'll also spot advertisements for "Quest Dragon 31" and "Rambo 12."  The best one is when Reimi is exploring one of McCoy's clubs.  It's a sci-fi themed one where patrons are dressed up as the Xenomorph from Alien the Thing from The Thing, among other creatures.

Speaking of which, Burn-Up looks fine for its age and sports a lot of detail in the design of its setting and action sequences.  There are also a couple of interesting shots, such as one where the camera follows the back of a police car, pans overhead as the vehicle goes around a turnpike, before returning to the rear of the vehicle.  However, the cutesy character designs feel out of place in a show such as Burn-Up, especially with how the women have giant bug eyes and the men overly slender ones.  The dub, produced by the one-and-only ADV Films in their early years, is not good.  Some of the acting, particularly the voice of Yuka, can be hard to stomach, and much of the dialogue features shoehorned-in one-liners and pop-culture references.


Short, predictable, and pointless as can be, Burn-Up is more watchable than Burn-Up Scramble, but it isn't enough to save this dud.  It feels less like a cohesive product and more like a test-reel for a show that never happened.  The characters and story leave a lot to be desired, and the leading ladies of this show lack charm and spunk.  At the end of the day, Burn-Up is bargain-bin fodder.  Quick, disposable, and boring, Burn-Up won't ruin your afternoon, but will probably bore you.