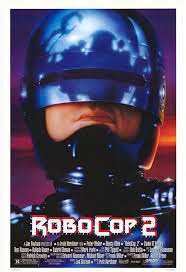 Sequels have a bad reputation of not being able to live up to the original.  After all, when the first installment is a huge hit, there's a certain expectation that the next one will be as good as what came before.  75 percent of the time, though, sequels fall short of those expectations, either because it copied what made the original great, and didn't change much, or it tried something different, but it didn't gel with audiences or critics.  The most interesting type of sequel is the one that wasn't a success when it came out, but over time, people have re-evaluated the picture and realize it's a lot better than it has any right to be.

Jaws 2, Gremlins 2: The New Batch, Predator 2, Indiana Jones and the Temple of Doom, these are just a few of the many sequels considered to be not as bad as everyone says it is.  At the top of this mantle lies RoboCop 2.  The first movie offered a great mixture of action, satire, and drama, and due to its success, Orion Pictures wanted a sequel.  Initially, director Paul Verhoeven and writers Ed Neumeier and Michael Miner were slated to come back, and the duo even drafted up a script, but after a falling out with Orion, the three left.  Frank Miller, best known for penning The Dark Knight Returns and Sin City, was brought on board as the writer, and in the director's chair was Irvin Kershner, whose credentials include directing what is considered the best installment in the Star Wars franchise, The Empire Strikes Back.

Over a year has passed since the events of RoboCop, but Detroit is still in bad shape.  Not helping matters is the rise of a drug lord named Cain (Tom Noonan), who's gotten the city hooked on a drug called Nuke.  The police would stop him, were it not for the fact that most of the force is on strike because of OCP.  Fortunately, RoboCop (Peter Weller) is on the hunt for Cain and his Nuke production facilities, but stopping the spread of drugs isn't the only thing on his mind.  He's also attempting to reconnect with Alex Murphy's former wife, which OCP disapproves of, so much so the company orders RoboCop to stop stalking the widowed woman.

Speaking of which, the mega-corporation is on the verge of taking control of Detroit since the city's debt is so high, there's no chance the mayor will be able to pay it off in time.  The company is also developing a successor to RoboCop but is having a hard time trying to find a worthy candidate for the project, especially after numerous failed attempts.  The leader of the project, Dr. Faxx (Belinda Bauer), believes using a criminal for the RoboCop 2 project would be a better choice than a cop.  When Cain is severely injured in a drug raid later in the movie, Faxx decides to harvest his brain, thus finding her perfect test subject.

On the surface, RoboCop 2 seems like a worthy follow-up to its predecessor.  The violence and satire are back in full-force, but the emotional drama which made the first stand out is largely absent here.  The end result is a fun thrill-ride, albeit one lacking in surprises.  Despite the title, RoboCop isn't the focus this time around.  Since his character arc was concluded in the original, RoboCop 2 doesn't give much for the titular cyborg to do.  Sure, he kicks tons of criminal ass, but that's about it.  The sub-plot involving RoboCop having to give up trying to reconnect with someone he used to love goes nowhere.  After an emotional confrontation with the widow of Alex Murphy, the film quickly sweeps her beside to focus on RoboCop's war on Nuke.

It's a shame, because it could have been interesting to see where this would have gone, and the filmmakers had shot scenes related to this plot point, but they didn't make it into the final cut.  Case in point, during the scene where RoboCop is being cut into pieces by Cain and his goons, he would have started hallucinating and seeing himself in front of the grave of Alex Murphy, which sounds cool, but alas, no actual footage of this moment has seen the light of day, aside from a couple of still photos and some behind-the-scenes footage.

Worse, Ann Lewis (Nancy Allen) is near absent in RoboCop 2.  Sure, she helps out her robotic partner every once in a while, but that's about it.  Whereas in the first movie she helped RoboCop regain his humanity and saved his life on more than one occasion; here, she's a sidekick and nothing more.  Earlier drafts had Lewis in a more involved role, but through multiple re-writes, here part was greatly diminished, much to the dismay of actress Nancy Allen.

Though the good guys aren't given much to do this time around, the criminal and corporate villains take center stage in place of them.  First, there's Cain.  Like Clarence Boddicker, Cain is a psychopath, one who is addicted to his own product and will gladly screw over anybody who gets in his way, even if they're part of his team.  For example, when a corrupt cop lets RoboCop know of Cain's hideout, the criminal retaliates by capturing the officer, having him tied to a gurney, and then cut open while conscious.  Also, like Clarence, he has a group of goons who tag along with him, including a young boy named Hob.  The foul-mouthed twelve-year-old sticks out like a sore thumb, to say the least.  It's understandable the mean streets of Detroit could corrupt someone like Hob, but the excessive swearing and attempts to make him look intimidating come off as laughable, despite the filmmakers intentions.

As for the benevolent OCP corporation, the film uses the company to play ups its satirical edge.  In RoboCop 2, OCP is trying to create a new RoboCop that will one-up their first unit, but no matter how hard they try, they consistently fail.  It's a great commentary on the nature of sequels and how studios believe creating something bigger in scope and size than the first must automatically guarantee a surefire hit.  Even after Faxx implants Cain's brain into her new robot, the mechanical monstrosity goes on a rampage during a public demonstration held by OCP after the Old Man (Dan O'Herily) flaunts how RoboCop 2 will destroy all Nuke facilities and pulls out a container filled with the drug, which enrages the brain inside the unit.


Additionally, RoboCop 2 pokes fun at how movie studios try to make their R-rated films family friendly in a rather amusing way.  Halfway through the movie, OCP decides RoboCop has gone too far in his hunt for Cain, so Faxx comes up with the idea to install a host of new directives into the cyborg that will make him show more restraint when dealing with criminals.  The result is a goody-two-shoes RoboCop who delivers PSAs about good nutrition and disciplines children rather than arrest criminals.  Of course, what is a RoboCop movie without fake ads and news breaks, and they're back as well, with my personal favorite being a commercial promoting sunscreen that protects against SPF 5,000 rays since the ozone melted away.

However, the dark humor associated with the film's violence comes in spades this time around.  Much of the carnage is straightforward and at times, a bit brutal.  One scene that comes to mind is Cain's operation.  As the doctors cut into his skull with various surgical tools, there are a lot of gruesome sound effects to enhance the procedure, like a loud pop when the doctors successfully pull the top of his skull off.  One of the few times the black comedy truly shines is during OCP's video showing off the various RoboCop 2 prototypes and how each one goes haywire.  One model shoots a couple of scientists before shooting himself, and another, upon walking out, rips his helmet off to reveal a screaming skull, followed the unit falling to pieces.

When it comes to special effects, the quality is about the same as the first; in other words, great.  Thee's a lot more stop-motion animation this time around, much of which is used to bring RoboCop 2 to life, and it's a sight to behold.  Keep in mind, this movie came out in 1990, a year before Terminator 2: Judgement Day, which treated audiences to the first real glimpse of what CGI was capable of.  Since then, CGI has become the norm for visual effects, so in a way, RoboCop 2 is the last hurrah of stop-motion animation.  The highlight is the showdown between the old and new, RoboCop vs. RoboCop 2.  It's a dynamic fight scene that sees the two go from OCP'S conference room, to the top of the building, before ending up outside on the streets where dozens of police officers stand armed and ready to take on the hulking machine.


Basil Poledouris didn't return to conduct the score.  In his place is Leonard Roseman, who brings his own style and tone to RoboCop 2.  Much of the music is quite heroic, especially the main theme, but between the two scores, Basil's is the better one.  Also, a choir can be heard chanting "RoboCop!" halfway through the title track, which is jarring yet unintentionally hilarious.  Yes, we get it, RoboCop is a badass, you don't have to remind us.

Although not as strong as the original, RoboCop 2 is a solid follow-up to the original, and a lot of fun to watch.  It lacks the emotional weight of the first and the likes of RoboCop and Lewis aren't given much to do aside from shoot first and ask questions later.  However, where the movie fails to expand on its protagonists it more than makes up for it through interesting villains and funny satire that pokes fun at sequels and commercializing popular franchises.  Plus, the film is a grand showcase for practical effects.  In short, RoboCop 2 is a good, but not great sequel.