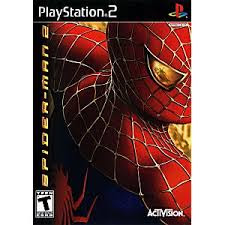 Summer is upon us and with it comes what is generally referred to as blockbuster season.  It's a time in which studios put out the big releases, films guaranteed to make the big bucks at the box office; back them when this time of the year was upon us, game publishers took advantage of the situation and produced video games based off the upcoming flicks.  Ninety-percent of the time, though, these titles were of average or poor quality, but every once in a while, you got a game that was better than expected, like Spider-Man 2.  Based off the movie of the same name, Spider-Man 2 changed many of the pre-established concepts associated with thee web slinger.  Instead of being a linear, action-adventure experience, players had the opportunity to explore New York and get a real taste of what it's like fighting crime as everyone's favorite neighborhood friendly superhero.

Since he defeated the Green Goblin at the end of the last film, Peter Parker has struggled to balance his life as an average citizen and protecting New York City from the crooks and criminals that roam the streets.  He's struggling to stay in college, can't maintain a steady job, nor can he maintain his relationships with family, friends, or the love of his life, Mary Jane Watson.  One day, Peter receives an invitation from Harry Osborn to meet with Otto Octavius, a renowned scientist currently working on an experiment to create an infinite source of renewable energy using a rare substance called Tridium.

When Otto holds a public demonstration, things go awry.  The energy source goes out of control, sending out electrical surges that kill his wife and cause his robotic tentacles used to control the energy to malfunction.  After Spider-Man saves the day, Otto is taken to the hospital, where he wakes up, kills the staff, and escapes.  Under the influence of the tentacles, Octavius vows to rebuild what he started and get revenge of Spider-Man, who he blames for the loss of his wife.


Spider-Man 2: The Game does a good job at adapting the film's screenplay into video game form, but it does add in a couple of new sub-plots and tweaks certain plot points from the movie to introduce new characters not seen in the picture.  For example, early on, Spider-Man receives a challenge from Quentin Beck, a stuntman convinced that the web-slinger is a fraud, so he sets up a series of challenges to try and expose him, but Spider-Man succeeds.  This drives Beck mad, so he adopts the persona of Mysterio, and stages a large-scale alien invasion hoax to frighten the people of New York.  Other villains from the comics, like Rhino and Shocker (no, not that Shocker) make cameo appearances, but the inclusion of Black Cat in the game is interesting.

In the movie, Peter Parker loses his powers after assuming he'll never be able to keep doing what he does best.  Since nobody wants to spend a fourth of the campaign as powerless Peter, the game tweaks this narrative thread by introducing Black Cat.  She convinces him that it's better to just abandon his normal life and stick with being a hero because that's more rewarding and satisfactory than anything else.  Eventually, Parker realizes he needs a normal life to keep things in balance, so he abandons what Black Cat offers in favor of pursuing a proper balance between heroics and being an everyman.  It's a change that works quite well to the advantage of the game, the issue is that the introduction of these new characters and plot-lines does throw the pacing off, especially towards the end of the game where it just rushes through the remainder of the film's plot just to reach the end.

Instead of confining the player and Spider-Man's abilities to a linear-progressing game, Spider-Man 2 drops the web-head into an open-world environment capable of letting gamers unleash the true potential of playing as Spider-Man.  Controls are great; in previous and even later Spider-Man games, web-swinging felt like an afterthought than anything else, it only acted as a means for Spider-Man to get over pits than anything else.  Here, getting around the city means being capable of getting good at shooting webs.  Before, whenever Spider-Man shot his webs, they just magically stuck to anything, even the sky; now, when pressing the web-swinging button, the wall-crawler will shoot his webs to the nearest building, light post, etc.  If there's nothing within his vicinity to swing on to, well, get ready to do some free-falling.

Tight controls means it's easy to get a grasp of the mechanics, and after some trial-and-error, you'll become quite adept at swinging through New York to reach your next objective.  A multitude of techniques available for purchase allows the player to experiment even further with Spider-Man's web swinging.  Combat is just as versatile.  There are two attack buttons; one for punching and kicking, and the other for webbing up goons.  Defeating enemies and swinging with style builds up Spider-sense.  When activated, time slows down, and Spider-Man is able to attack and counter his foes much quicker than in normal time.  Like the web-swinging, there a multitude of attacks available to purchase and use.  My personal favorites are the piledriver, in which grapple an enemy, jump, and then press circle to drive the goon into the ground, and webbing up a thug and spinning him round and round and round.


Meanwhile, bad guys tend to wield melee weapons or firearms; late in the game, some will be geared up in hulking mech suits that require the player to use Spider-sense to get around them and attack from behind.  If an enemy is about to strike, you can press the counter button to dodge and follow up with a secondary attack.  Unfortunately, the collision detection on this move is off.  It works fine when up against one person, but when you counter and someone else follows up, you're never able to properly react to the strike, even as you rapidly press counter.

Spider-Man 2's open-world layout will be familiar to anyone who's played games of this nature.  The story is split into eighteen chapters; each one involves beating the latest story missions, as well as amassing a certain number of points or buying a specific move or upgrade from the store.  There are many ways to earn points.  The most common method is to beat up thugs and stop crimes.  Whenever a green question make appears above a civilian, then a crime is available to stop.  Said crimes can either be robberies, a stolen vehicle, or someone that needs to be taken to the hospital before time runs out.  Though optional, these tasks get repetitive, fast, since there are only a handful of objectives that get tiresome to beat after the 50th time.

Fortunately, there are other tasks available, like taking up odd jobs such as snapping photos for the Daily Bugle or delivering pizzas.  Scattered around New York are challenges that test the player's web-swinging skills.  Then, there are the collectibles.  You can find hidden tokens on top of skyscrapers, on buoys, in gang hideouts, or in hidden areas.  There are also hint markers strewn about New York; when activated, these trigger a message narrated by one of the greatest actors of our time, Bruce Campbell, and they relate information regarding the gameplay, story, or Spider-Man's history, all delivered with the snarky, wise-ass attitude Bruce Campbell is known for.

Though rough around the edges, to say the least, one area of Spider-Man 2's graphics that still holds up is its sense of scale.  New York City is huge, and the visual and audio effects used whilst swinging through the city really enhance the feeling that this place is like one giant, urban jungle, and Spider-Man is Tarzan, swinging around the city with ease.  Yet, the quality of the visuals leaves a lot to be desired.  Pop-in is a plenty, as are the five civilian character models endlessly copied over and over; at least the models for the principle characters look passable.


Sound is just as uneven.  Tobey Maguire gives the world's most enthusiastically monotone performance playing Spider-Man.  Whether he's shouting quips or trying to show emotion during a pivotal scene, Maguire gives as much of an effort as someone clearly looking for a paycheck.  Other performances, like the pedestrians or the poor-man's J.K. Simmons, are just as bad, but the likes of Kirsten Dunst, Alfred Molina, Bruce Campbell, and the actors for Mysterio, Black Cat, and Harry Osborn fare better, especially the King of the Chins, Bruce Campbell.

Spider-Man 2: The Game does a lot right.  The game takes the film's plot and works it into a manageable adaptation, making some changes and adding new material that's for the better, even if it does throw the pacing off of the game towards the end.  As for the gameplay, it eschews linearity in favor of an open-world set-up that allows the developers to open up what it means to be Spider-Man through excellent web-swinging and fun combat.  Though the game can get repetitive and is quite short for being an open-world game, lasting anywhere from four to five hours, Spider-Man 2 is a blast to play and is one of the better movie tie-in games to have come out.