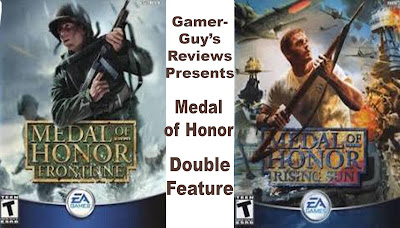 As I've discussed in prior reviews, there was a time when shooters set in World War II were considered the norm for the genre.  Before Call of Duty sets its sights on modern and futuristic firefights, the series started off focusing on the war where the enemy was German, and health didn't recover by hiding behind a rock for a few seconds.  Today, Call of Duty's major competitor is Battlefield, but at the beginning of the 2000's, its rival was a franchise conceived by acclaimed director Steven Spielberg, and that game was Medal of Honor.  Although considered a forgotten franchise since a 2010 reboot and its sequel put the kibosh on the series; for a time, people enjoyed the games.  Of all the games out there, two that are frequently discussed are Medal of Honor: Frontline and Medal of Honor: Rising Sun, but are they still good, or is it just blind nostalgia?

Frontline follows Lieutenant James "Jimmy" Patterson, a U.S. soldier who is part of the OSS organization.  After partaking in the infamous D-Day landing, Patterson is sent out by the OSS to find out information regarding the Nazi's development of a high-speed jet bomber that might give the Germans the upper hand.  His assignment takes him through Operation Market Garden, the occupied city of Arnhem, and a research facility run by the fearsome General Sturmgeist, who is also in charge of the jet fighter operation.

Rising Sun tells the tale of Joseph Griffin.  While relaxing in Hawaii, the base he is stationed at, Pearl Harbor, is hit with a surprise attack from the Japanese.  Griffin narrowly escapes the sinking boat he is on; later, he meets up with his brother Donnie while on tour in the Philippines.  Joseph, Donnie, and the squad manage to recover a demolitions truck stolen by the Japanese, which they use to blow up a bridge; unfortunately, Donnie is captured while they are fleeing from the enemy.  Later, Joseph becomes a member of the OSS, and is sent out to infiltrate a meeting being held at a hotel in Singapore.  There, he discovers the Japanese are running gold smelting operations in Burma, so with the help of the Allies and the OSS, Joseph sets out to sabotage their work there.


Frontline's plot is nothing special, but what is nice about the story, and this holds true with the other game, is its attention to detail.  Many of the missions take place during battles and locations prominent during World War II.  Once a mission is completed, the player is treated to narration summarizing the aftermath of the events that took place, complete with historical footage.  It gives the minimal narrative a sense of importance knowing what took place as Patterson carried out his objectives actually happened.  On the other hand, Rising Sun attempts to have a fleshed-out story, but it doesn't go anywhere.  Worse, after Joseph's brother Donnie is captured, we're never treated to a mission or cutscene showing what happened to him.  Instead, this dangling thread is saved for a sequel that never happened.

When it comes to the gameplay, the two are practically identical, save for a handful of mechanics.  Frontline features six missions split into two or three smaller acts, while Rising Sun has nine missions, none of which are broken into chunks, which I'll explain later.  Many of the missions found in both games will see Jimmy Patterson or Joseph Griffin accomplishing objectives like destroying gun emplacements, sabotaging equipment, retrieving important documents, or rescuing somebody captive.  Along the way, you'll shoot up dozens of enemy soldiers, but a few stages incorporate light stealth into the mix to shake things up a bit.

Controls are mildly clunky.  The default set-up used in Frontline mimics the controls found in the earlier PS1 games, but a more contemporary option is available.  Even then, there are some quirks.  Aiming your guns feels rough, regardless of whether or not you're zoomed in; speaking of which, the game doesn't rely on iron sights; instead, the camera zooms in so you can pull off more precise shots, yet the drawback is that you can't move, so you to be a little more considerate of what's going on around you.  Then there's the reloading, which is bad, particularly in Frontline.  Though the animations are detailed, Patterson takes too long to reload a weapon, and if you switch guns or melee an enemy, he'll start over.  As a result, it's best to reload before moving on, or else you'll be doing a lot of strafing just to reload.  Luckily, Griffin doesn't take as long to put a new clip into his gun.


When it comes to guns, the selection of firearms is standard for a game set during this era.  There are Thompsons, M1 Garand rifles, the Springfield, the MP40, and the Type-22 rifle, which is in Rising Sun.  What's unusual about both games is that you can't pick up guns dropped by fallen bad guys; unless the weapon is in a pre-determined spot, you can't use it, which is odd.  Fortunately, the Germans and Japanese put up a considerable fight, although they do show signs of stupidity every once in a while.  However, towards the end of Frontline, there's a sharp difficulty spike and the Nazis become ruthless killing machines, capable of whittling Patterson's health down within seconds.

Even more frustrating is that they become capable of soaking up more damage, which is ridiculous.  You can unload an entire clip of BAR ammo into these guys, and they'll still keep fighting.  Keep in mind, when Patterson dies, you to start the entire mission over, and let's just say that re-doing twenty minutes worth of gameplay is not a fun experience.  Rising Sun is considerably less challenging, as health and ammo are plentiful even on Normal; plus, since levels aren't broken up into smaller acts, there are now save spots that allow you to save your progress, which is nice.

Of the two games, Frontline is the better one because of its variety and sense of adventure offered by many of the missions.  Sure, the game can get frustratingly cheap towards the finale, but it has a lot of moments that stand out like the D-Day invasion or infiltrating a dinner party to save a hostage.  Rising Sun attempts to re-capture what made the previous game enjoyable, but it loses much of its impact.  The prologue set during Pearl Harbor is cool and it's nice to see a game that focuses on the Pacific theater since that's a side of the conflict not seen much in World War II shooters.


Yet, after the excitement of the opening, the rest of the game fails to live up to that moment since you spend a lot of campaign shooting the Japanese in similar-looking jungles with low-res textures that make you feel like you're in the middle of Turok on the Nintendo 64, rather than a shooter on the PlayStation 2.  What issue these two do have in common is their short length.  Beating the campaigns in both games can take anywhere from three to four hours.  The PlayStation 2 version of Frontline has no multiplayer, while the GameCube and Xbox versions do; luckily, Rising Sun has split-screen multiplayer and a co-operative campaign option across all platforms, giving this game some extra legs over its predecessor.

At the time, the two games looked fine and do now, even if the overall quality is rough around the edges.  Aesthetically, Medal of Honor: Frontline is a drab game; many of the stages are awash with brown and grey, and some of the stages sport poor lighting, which can make figuring out where Nazis are hiding a chore to do, plus the frame-rate can get choppy when there's too much happening.  I also encountered a strange bug where the mouths of enemies would keep moving even after they were killed, which was just plain creepy.  Medal of Honor: Rising Sun is a more colorful game, but as alluded to prior, the graphics look a bit jankier, which is noticeable in the jungle levels.


Sound design is pretty good in both games.  Weapons sound great and the music is solid, especially Frontline's score, which was done by acclaimed composer Michael Giacchino.  The same can't be said for the voice acting, which isn't bad, and it's nice that Germans speak German and the Japanese, well, Japanese, but none of the performances stand out, aside from Patterson's commanding officer, who is voiced by the same guy that voiced John Adams in the first Conduit.

Medal of Honor: Frontline is a fun, albeit brief, shooter that offers some good thrills, even when the game artificially spikes the challenge towards the end of the game.  Medal of Honor: Rising Sun tries to one-up its predecessor by offering a legitimate storyline, but the end result feels less like a true sequel and more akin to an expansion pack.  The opening Pearl Harbor stage hints at something promising, but the rest of the campaign fails to do anything interesting with the material, and instead opts to take an interesting side of the conflict and turn it into a middle-of-the-road shooting gallery.