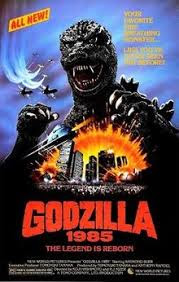 In 1954, he rose from the depths to terrorize Tokyo and make a name for himself in the film industry.  This creature went on to have a successful career in film and television.  Now, it's 1985, the times have changed, and it was only inevitable that he would return to the place where it all started.  This time, though, he's bigger than ever before; that's right, it's the return of the one, the only...Raymond Burr.

Whoops, this is about Godzilla's return to the big screen, not Raymond Burr's!

After the release of Terror of Mechagodzilla (1975), the King of the Monsters went on a break, and after nine years, Godzilla returned in 1984's The Return of Godzilla, but when New World Pictures acquired the rights to this film, it only seemed fitting to bring back Raymond Burr, star of Godzilla: King of the Monsters (1956).  Join me as I take a second look at a film that mixes Cold War-era politics with giant monster action and Dr. Pepper product placement.