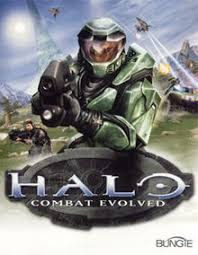 Microsoft is known for a lot of things, but at the tail end of the 20th century, nobody expected them to become video game creators.  The launch of Halo: Combat Evolved in 2001 proved to be a pivotal moment for the company.  The original Xbox released on November 15, 2001, and what better way to excite consumers with a new console than with the debut of a new series.  Though a juggernaut franchise now, Halo: Combat Evolved, when it released, was just a new IP from developer Bungie.  Little did they know that this game would define what the studio was in the years to come, at least until they created Destiny.

In the future, humanity has succeeded in colonizing other planets, but with success comes failure.  An alien race known as the Covenant has wiped out numerous human settlements across the galaxy, and their latest target is the planet Reach.  The planet is destroyed, but amongst the survivors is an armada of marines and their ship, the Pillar of Autumn, led by Captain Keyes.  They can't enjoy the escape too long as the Covenant have managed to track them down.  Therefore, a super-soldier called the Master Chief is awoken from hyper-sleep to deal with the threat and protect the ship's AI, Cortana.  The marines and Master Chief are overwhelmed by the enemy forces, so Captain Keyes orders an evacuation.

Master Chief and Cortana escape, only to crash land on a mysterious planet shaped like a ring.  While searching for survivors, they learn Keyes has been captured, so a rescue operation is carried out.  After he is saved, Keyes wants to figure out what exactly this planet is, and the secrets that lie within, so he sets out on his own while Master Chief and Cortana go in search of answers.  Unfortunately for everybody on the planet known as Halo, it turns out that an ancient, parasitic alien race known as the Flood is being held within, and Keyes releases the threat.  With chaos breaking out all over Halo, Master Chief must find a way to eradicate not just the Covenant forces, but also the Flood, since they threaten to consume the galaxy should they escape.

Take the action of Aliens, mix it with the mystery of Alien and the world building of Star Trek, and that's Halo in a nutshell.  You'll notice the motifs throughout the game.  For example, the marines act like the soldiers from Aliens, sporting similar designs in their weapons and outfits, and there's even a cigar-chomping sergeant that's more or less Apone from the 1986 classic.  Yet, there's an aura of mystery surrounding the planet.  Like in Alien, the player is constantly questioning what exactly Halo is.  As the game progresses, questions are answered regarding Halo, but enough threads are left dangling to keep the player wanting to know more about the mythology of these games.

Besides an interesting story, Halo features enjoyable characters.  Of the cast of characters, the ones that stand out are Master Chief and Cortana.  Their partnership in this game reminds me of Robocop and Lewis from the Robocop series.  Like Robocop, Master Chief is a heavily-modified human with strong combat expertise, but who doesn't have much to say.  He's not a silent character, but the only time he speaks is when he has a question to ask or is receiving an order from someone.  This is where Cortana comes in.  Cortana acts as both the player's and Master Chief's guide to Halo.  She'll update Chief on the latest objectives in a mission, and she's the one most of the characters talk to during cut-scenes, rather than the man in green armor.  Luckily, Cortana never becomes a nuisance since her dialogue is both informative and humorous, and much of the storytelling relies on the visuals and atmosphere to get across what's going on than the dialogue itself.

Though the game is seventeen years old, it's surprising how much of Halo: Combat Evolved's gameplay has managed to hold up.  Many of its mechanics, including the regenerating health system and two-weapon limit, have been copied by modern shooters, and the control scheme is smooth and easy to get used to, considering the button layout has also been re-used by other games.  Each of the game's ten levels sees Master Chief taking on Covenant and Flood forces across a multitude of locations, many of which are set in different parts of Halo.  The game might be a run-and-gun shooter, but one has to be careful when taking on enemies, particularly the Covenant.

Covenant forces are split between three enemy types.  Grunts are the red-shirts; they'e small, expendable, and are equipped with either a plasma pistol or needler.  The grunts are also complete chickens and have a tendency to run around the battlefield flailing their arms if the situation is too much for them.  Next are the jackals, lizard-like creatures who wield a shield in one hand that blocks most enemy fire, while wielding a plasma pistol in the other.  Getting a clean shot on these goons can be tricky, and jackals can fire a charge shot from the plasma pistol that can quickly disable Master Chief's shields, but like grunts, they will panic and retreat if their shield is lost or if there's too much going on.
Finally, there are the elites, who act as enemy officers.  They look like an armored version of the Predator, and like Master Chief, a shield protects their body from gunfire, but when it's depleted, an elite can be finished off quickly.  These are the most challenging foes to fight since they're quite adept at combat.  They'll flank, dodge grenades, and generally provide a challenge for the player, especially on higher difficulties.  Sometimes, elites are equipped with an energy sword; imagine if the golden gun from Goldeneye 007 was turned into a melee weapon, that's this device.  When an elite strikes you with this weapon, it's an instant death.  While fighting the Covenant offers a good challenge, the same can't be said for the Flood.

Once the Flood show up halfway through the campaign, much of the thrill of the game's combat is lost.  Since the Flood are mindless space-zombies, they use their numbers to overwhelm the player, and these creatures come in two forms.  The first is a small parasite which explodes when shot or if it latches on to Master Chief.  Meanwhile, the infected are mutated Covenant or humans that run around and attack anybody within their vicinity.  It's also possible for infected to keep on fighting even after the player supposedly kills them, so shooting them twice when one is lying on the ground is a must.  Additionally, infected can wield firearms, including rocket launchers, so watch out.  However, once the Flood are introduced, killing them becomes a chore.

Out of all the levels in Halo, the weakest one is "The Library."  In this stage, you go from one similar looking room to the other, fighting off never-ending waves of the Flood.  The endless numbers of Flood, combined with the constant strafing and shooting, makes completing this level a chore.  Indeed, some of the levels feel drawn out to the point of tedium, but others, particularly "Halo," "The Silent Cartographer," and "Assault on the Control Room" are fun to play due to their sandbox-like nature, which allows you to complete most of the objectives in whatever order pleases the player.

When fighting either the Covenant or the Flood, Master Chief has an assortment of weapons to choose from, such as pistols, shotguns, pulse rifl-er, assault rifles, rocket launchers, plus alien weaponry like the plasma pistol, plasma rifle, and needler.  Halo is an early instance of a shooter using a two-weapon limit; though this concept is considered the bane of existence in modern shooters, here, it's not.  Each gun has its advantages and disadvantage against the enemies in this game.  Covenant weapons are great for taking out foes equipped with a shield, but they can run out of energy.  Human guns are just as useful, but require ammunition, which isn't always readily available.  Also, Master Chief can take control of a few vehicles, and these handle well enough, but the Warthog, a military jeep, can slide all over the place if one doesn't make use of the e-brake.

Visually, Halo: Combat Evolved looks good for the time and holds up even to this day.  Granted, textures are bland and the animations, particularly during cut-scenes, look exaggerated and make the characters seem like puppets, but its biggest strength is the sense of scale.  Environments are large, especially levels set on Halo itself.  When looking up, you're always reminded that this is no ordinary planet, since the rest of it encircles wherever Master Chief currently is.  Sound is also good.  Master Chief is voiced by radio DJ/voice actor Steve Downes, and what Chief does say in the game is well-written, same goes for the rest of the cast.  Then there's the music; composed by Marty O'Donnell, who was Bungie's in-house composer all the way up until Destiny, the music is equal parts grand, eerie, and calm.  Many of the musical cues are heavily inspired by James Horner's score to Aliens, and when the soundtrack kicks in during a firefight, it gets your blood pumping with excitement.

Halo: Combat Evolved has managed to stand the test of time and is still a solid shooter.  The story, while borrowing elements from plenty of popular works, is interesting due to the writing and setting.  It's not every day that a game is set on a ring-like location, and there are plenty of mysteries for Master Chief and company to discover on Halo.  The gameplay also holds up; combat is great, when you're fighting the Covenant, that is, but the quality of the levels is hit-and-miss.  Despite these problems, Halo: Combat Evolved is certainly worth checking out.