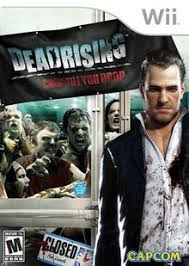 Resident Evil 4 is considered one of the greatest games of all time, but it also deserves the award for being one of the most ported games of all time.  From the Nintendo Gamecube to the Xbox 360 to the PlayStation 4, chances are many people have played this game in one form or another.  One system it was released on was the Nintendo Wii, where it sold well.  Sensing this, Capcom decided to port its recent hit, Dead Rising, to the little white console.  Yet, seeing how this system was not as powerful as the likes of the Xbox 360 and the PlayStation 3, not to mention that it sported an untraditional controller set-up, changes had to be made.  The end result is a bizarre mish-mash of ideas from two different games, and a title with a fewer amount of dead rising.

Frank West is a photojournalist looking for a big break.  When word gets out that the town of Willamette, Colorado has been quarantined by the government, he hitches a ride in a chopper with the request that the pilot fly to the town, so he can see what's going on.  While investigating, they are ambushed by government choppers, and without hesitation, Frank leaps out of the copter and on to the roof of the town's local mall.  Once he finds his way toward the lobby, Frank discovers the truth.  Outside, there are zombies trying to get in, and some civilians are setting up a barricade, so the ghouls can't get in.  Unfortunately for them, an old lady notices her dog outside, oblivious to the fact that it's a zombie, and when she tries to save to the pooch, the zombies flow in and begin to feast on the people.

Frank manages to escape back to the security room, but no one else makes it.  Once there, he is greeted by a pair of government agents, Jessie and Brad.  They're looking for somebody but won't say who.  Eventually, Frank learns of a man named Carlito, who is responsible for the outbreak in Willamette and is the person they are looking for.  With the help of the agents, plus Carlito's sister, Isabela, Frank West sets out to discover the reasons why the outbreak happened within three days since the pilot will then return to pick him up.

Dead Rising's story is serviceable; it's not bad and it does enough to keep your interest, but that's about it.  Much of what happens here has been explored in plenty of other zombie-related fiction.  In fact, the game's concept of fighting zombies in a mall got Capcom into legal trouble with the studio who owns the rights to Dawn of the Dead, both the original and the remake.  Fortunately, the lawsuit was dismissed since no connections to both products could be found beyond the basic premise.  Throughout the campaign, questions are set up regarding Carlito and what his grand scheme is, and because of the game's structure, the outcome of events will vary depending on the circumstances at hand.
However, when you find out what Carlito's plan is, you realize that he is the luckiest bad guy in the world.  Minor spoilers ahead, but halfway through the game, Isabela reveals Carlito's plan is to detonate bombs underneath the mall that will release parasitic larva into the air, larva that becomes a wasp capable of infecting people with the zombification gene.  The problem is that these are bombs, and if they blow up, then the wasp larva would be incinerated, so no zombies.  Then again, considering how apparently most of the town was short on Raid when Carlito released the wasps to infect the town's populace, it's best to say that logic was not a key ingredient in his plan.

Story issues aside, Dead Rising does have moderately compelling characters.  When the game begins, Frank West is a cocky, hotshot journalist who could care less about helping people out, but as things progress, he finds out that working with other individuals is the only way he's going to get closer to the truth.  Although the rest of the cast is fine, the psychopaths the player will encounter are the highlight of this experience, besides Frank West.  The psychopaths are people that have gone mad due to the outbreak and have resorted to desperate measures just to survive.  They're exaggerrated and over-the-top, but not to the point that they stick out like a sore thumb and detract from the experience.  Highlights include Adam, a crazy, chainsaw-wielding clown that gives the Killer Klowns a run for their money, Cliff, a Vietnam War veteran that goes mental and takes people hostage, and Stephen, a grocery store salesman who's a little bit too obsessed with his job.

Dead Rising: Chop till You Drop is a strange anomaly.  While the set-up is the same, the core gameplay has been overhauled tremendously.  Frank still has three days to uncover the truth behind the Willamette outbreak; however, there is no time limit.  Players no longer have to worry about keeping track of time and making sure to accomplish the available missions before they disappear for good.  Instead, quests are done by speaking with Otis, the janitor.  Once a certain number are completed, you can continue the story.  Because of the change in mission structure, the open-world aspect of the game has been scaled-back tremendously.  The entire mall is available to explore, but the only times you can do what you want are during cases.

When taking on psychopaths and saving people, a timer keeps track of how long it takes for you to complete the quest, and at the end of such missions, you receive a ranking based on your performance.  Getting an A or S rank can reward the player with free weapons, extra cash, costumes, or special healing items.  Money is used to buy weapons and other goods from Cletus, a hostile owner of a gun store that dies in the original but is saved by Frank here.  The Wii version's treatment of the psychopaths will be discussed later.

One area that this game improves upon is controls.  Chop till You Drop was made with the Resident Evil 4 engine, so it uses the same control set-up found in Resident Evil 4: Wii Edition.  Aiming is smoother here than in the original, but Frank can't use his camera, which is odd, considering he always has it with him during cut-scenes and gameplay.  While the controls are better, the issue with using an engine from a different game is that the whole experience feels like a re-skin rather than a unique product.  Frank's animations re-use many of Leon Kennedy's motions, and zombies are now capable of being stunned by a shot to the head or knee, leaving them vulnerable to a melee attack, just like in Resident Evil 4.  Worse, all of the firearms Frank can acquire are from Resident Evil 4, so instead of just re-working the guns from Dead Rising into Resident Evil 4's aiming system, you get the likes of the Blacktail, Riot Gun, Machine Pistol, and the Broken Butterfly for Frank to use.

Additionally, the concept of using items around the mall to dispatch zombies has been downplayed tremendously.  You can still pick up stuff and use it against the undead, but there are fewer things to use, and unlike guns, they can't be stored in Frank's inventory.  Speaking of which, it's time to address the Tarman in the room, the lowered zombie count.  It's understandable that there would be a lower onscreen enemy count due to the Wii not being as powerful as the Xbox 360, so instead of being swarmed by hundreds of ghouls, now there are, at most, ten to fifteen on-screen at a time, and the short draw-distance means they're constantly disappearing and reappearing out of existence.

To compensate for the fewer number of zombies, special enemy types have been thrown into the mix.  What are they?  Undead psychopaths and animals.  Cliff, Jo, and Kent, all of them bosses fought in the original, have been turned into super-zombies that can take more damage than your normal, rotting corpse.  Strangely, Paul, another psychopath, is completely absent, but his weapon of choice, Molotov cocktails, can be found around the mall.  Human zombies aren't the real enemy, though, no, it's the never-ending supply of zombie poodles and parrots that are the real threat.  Why Willamette has pet stores that only sell poodles and parrots, I don't know, but what I do know is that these creatures are surprisingly more bloodthirsty than the human corpses milling about.

As discussed earlier, the lack of zombies adds a feeling of emptiness to the mall, and it makes the zombie apocalypse portrayed in Dead Rising feel more like a zombie nuisance.  Fortunately, this means escorting survivors isn't as annoying, even if they are still brain-dead.  The quality of the graphics is average.  Character models look low-res and everything lacks proper detail, and the cut-scenes, rather than being created with the in-game engine like on the 360, are simply movie files.  However, the mall has been faithfully recreated, and everything's intact, though the barriers that have been set up are hugely annoying since they block off perfectly useable paths.  Sound, including voice acting and music, is on par with what's heard in the 360 version.

Dead Rising: Chop till You Drop is commendable for trying to keep the spirit of the original Dead Rising intact.  The problem is in converting the game to the Wii, much of what made the original enjoyable is lost.  There's still some fun to be had with killing zombies, the controls are better, and there a number of things to unlock for use in the game, as well as some bonus mini-games to try out.  However, the removal of a time limit, altered and more repetitive mission structure, and the recycling of stuff from Resident Evil 4 relegates this version to nothing more than a mere curiosity.