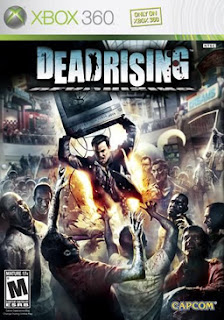 Capcom.  When somebody utters the name, a number of franchises rush through their minds, such as Mega Man, Street Fighter, Dark Void, and the king of the survival horror genre, Resident Evil.  Released in 1996, the game revolutionized the survival horror genre and set the standard for future survival horror games.  Ten years later, history repeated itself through the release of Dead Rising for the Xbox 360.  At the time, the system had been released less than year ago, and to take advantage of the new hardware, Capcom released this title showcasing the power of the then next-gen console.  How?  Through teeming hordes of zombies.

Frank West is a photojournalist looking for a big break.  When word gets out that the town of Willamette, Colorado has been quarantined by the government, he hitches a ride in a chopper with the request that the pilot fly to the town, so he can see what's going on.  While investigating, they are ambushed by government choppers, and without hesitation, Frank leaps out of the copter and on to the roof of the town's local mall.  Once he finds his way toward the lobby, Frank discovers the truth.  Outside, there are zombies trying to get in, and some civilians are setting up a barricade, so the ghouls can't get in.  Unfortunately for them, an old lady notices her dog outside, oblivious to the fact that it's a zombie, and when she tries to save the pooch, the zombies flow in and begin to feast on the people.

Frank manages to escape back to the security room, but no one else makes it.  Once there, he is greeted by a pair of government agents, Jessie and Brad.  They're looking for somebody but won't say who.  Eventually, Frank learns of a man named Carlito, who is responsible for the outbreak in Willamette and is the person they are looking for.  With the help of the agents, plus Carlito's sister, Isabela, Frank West sets out to discover the reasons why the outbreak happened and do it within three days since the pilot will then return to pick him up.

Dead Rising's story is serviceable; it's not bad and it does enough to keep your interest, but that's about it.  Much of what happens here has been explored before in plenty of other zombie-related fiction.  In fact, the game's concept of fighting zombies in a mall got Capcom into legal trouble with the studio who owns the rights to Dawn of the Dead, both the original and the remake.  Fortunately, the lawsuit was dismissed since no connections to both products could be found beyond the basic premise.  Throughout the campaign, questions are set up regarding Carlito and what his grand scheme is, and because of the game's structure, the outcome of events will vary depending on the circumstances at hand.
However, when you find out what Carlito's plan is, you realize that he is the luckiest bad guy in the world.  Minor spoilers ahead, but halfway through the game, Isabela reveals Carlito's plan is to detonate bombs underneath the mall that will release parasitic larva into the air, larva that becomes a wasp capable of infecting people with the zombification gene.  The problem is that these are bombs, and if they blow up, then the wasp larva would be incinerated, so no zombies.  Then again, considering how apparently most of the town was short on Raid when Carlito released the wasps to infect the town's populace, it's best to say that logic was not a key ingredient in his plan.

Story issues aside, Dead Rising does have moderately compelling characters.  When the game begins, Frank West is a cocky, hotshot journalist who could care less about helping people out, but as things progress, he finds out that working with other individuals is the only way he is going to get closer to the truth.  Although the rest of the cast is fine, the psychopaths the player will encounter are the highlight of this experience, besides Frank West.  The psychopaths are people that have gone mad due to the outbreak and have resorted to desperate measures just to survive.  They're exaggerated and over-the-top, but not to the point that they stick out like a sore thumb and detract from the experience.  Highlights include Adam, a crazy, chainsaw-wielding clown that gives the Killer Klowns a run for their money, Cliff, a Vietnam War veteran that goes mental and takes people hostage, and Stephen, a grocery store salesman who's a little bit too obsessed with his job.

Dead Rising is an open-world game with a single goal, Frank West must figure out what's going on within three days; once he does, he must get back to the rooftop so he can get out of there.  Over the course of the three in-game days, he'll complete main and side missions, capture photos of the event, and kill a ton of zombies.  However, the opening thirty minutes are a rough start.  Frank West starts out as a weakling, he has a small health bar, limited inventory, and his top running speed is akin to a senior citizen participating in a 5K marathon; plus, the first mission pits you against a boss.  Once that learning curve is out of the way, the game opens up and the madness can ensue.

Willamette Parkview Mall is split into multiple sectors, all of which are filled to the brim with zombies and stuff to kill them with.  Frank can utilize nearly every object around the mall that isn't nailed down as an instrument of destruction.  2x4's, swords, antique battle axes, and a lawnmower are just a few of the many items the player can use; some things, like paint cans, masks, CD's, and a plastic mega-buster from Mega Man only irritate the dead, but blunt objects, bladed weapons, and firearms let Frank dish out the pain.  Killing zombies, defeating bosses, and saving people earns him experience, referred to as Prestige Points; in turn, he levels up, which will either increase his stats for things like health, inventory, and walking speed, or grant him a special move like a jump kick, dodge roll, or the ability to suplex zombies.

What makes Dead Rising interesting from other open-world games is its usage of time.  A clock appears whenever Frank enters a new area to remind players of the end goal; additionally, all missions are timed.  As players explore the mall, he or she will receive messages from Otis, the janitor, who will inform the player of new missions and other opportunities that pop up.  After a brief dialogue exchange, the mission appears.  Each mission is given an allotted amount of time to go and complete, and when time runs out, the quest is gone for good.  If this happens to a story mission, then future cases become unavailable and you won't be able to see the rest of the plot, resulting in a less-than-stellar ending.

This mechanic can seem stressful for first-time players, but it isn't.  As you get deeper and deeper into the game, you figure out what you can accomplish depending on what's available and how much time is left to complete said task.  When a mission is in blue, then there's plenty of time to go and do something else, but if it's in red, then you should probably hustle and go get it done.  However, what is most certainly a stressful experience, at least in this installment, is the act of saving people, something will unleash a torrent of rage in such instances, but more on this mechanic later.

Despite being over ten years old, Dead Rising is a lot of fun, and much of the enjoyment comes from dispatching zombies in as many creative ways as possible, but some aspects of the game haven't held up particularly well.  The aiming controls are clunky.  To aim a gun or throw an item, you must hold the right trigger and press X to throw/fire; also, Frank can't move when aiming, meaning he's extremely vulnerable to the zombies around him.  Yet, to aim his camera and snap Pulitzer Prize-winning pictures, you hold the left trigger and unlike aiming a gun, Frank can move in this position.

Then there's the AI, which is something beyond comprehension.  It's understandable that the intelligence for zombies would be dim-witted, but for survivors, well, you're in for a ride to hell.  Survivors fail to keep up with Frank, can get stuck on objects or other people, and will inexplicably stop in their tracks, often at the wrong point in time.  Should they get caught in the grasp of zombies, good luck rescuing them, especially when you have to consider the safety of other survivors that may be with Frank.  While such folks are walking examples of stupidity and tedium at its finest, the psychopaths fluctuate between being challenging and a cakewalk.  When a boss is defeated, he or she drops a weapon, and many of them are overpowered to the Nth degree, so much so they can make defeating future bosses a breeze, especially since the weapon will respawn when you go into a new area.

Dead Rising's other big flaw, besides terrible AI, is its save system.  The Wii version features multiple save slots, as does the PlayStation 4, Xbox One, and PC re-release.  However, the original Xbox 360 release only has one save slot, and the only way to save data is by using restrooms or receiving an option to save once a certain amount of cases are completed.  Knowing this, it's best to save constantly, especially before the next story mission, psychopath, or survivor encounter, or else you'll be in a world of trouble.  The flip-side to this is that should you die, you are given the option to either reload from an earlier save, or start back at the beginning, but with all skills and experience Frank has learned.
At the time of its release, Dead Rising was an early example of what next-generation hardware was capable of, specifically how much activity could be onscreen.  No matter where Frank is, he is surrounded by hundreds of zombies, and the framerate holds up, despite occasional lag.  In general, the game looks fine, but there are draw distance and pop-in issues that rear their ugly head from time to time, and the animations, especially during dialogue exchanges, look poor.  Meanwhile, sound is decent.  The ambient mall music heard against the moaning wails of the undead is a delight to hear, and the boss themes are excellent; however, the same can't be said for the voice acting.  The performances fluctuate between so-bad-they're-good and just plain bad, depending on the character that's speaking, and it clashes with the serious nature of the story.

Dead Rising is a unique specimen.  While later entries would refine many of the first game's concepts, the original is still a fun, solid experience.  The mall setting is a great place for players to let loose due to the wide selection of items available for use.  The time mechanic provides a sense of urgency to what's happening, since not keeping with what's going on may result in large portions of the story being lost, the opportunity to save someone trapped within the mall, or the chance to fight a psychopath.  Yet, the act of rescuing people or confronting a lunatic tends to be more of a chore than it should be due to highly erratic AI.  Take Dawn of the Dead, specifically the sequence involving a pie-fight with zombies, turn it into a video game, and you have Dead Rising, an enjoyable and refreshing take on the zombie video game.