War never changes, especially World War II shooters.  From the late 90's and up into the mid-2000's, the video-game industry was inundated with first-person shooters set during the big one, World War II.  Though plenty of quality titles like Medal of Honor, Call of Duty, and Brothers in Arms were released and did well critically and financially, the market became over-saturated, and gamers yearned for something different.  Enter Call of Duty 4: Modern Warfare, which was set in modern times.  Because of its immense success, companies began to release modern-day and near-future shooters; eventually, people complained about over-saturation.  Things came full circle with the release of 2016's Battlefield I, which was set during WWI.  The Call of Duty franchise followed suit with 2017's Call of Duty: WWII.

Call of Duty: WWII follows private Ronald "Red" Daniels, who is part of a squad in the 1st Infantry Division.  Other members of the unit include Zussman, a New Yorker with a penchant for making sarcastic remarks, Pierson, a sergeant with a chip on his shoulder, and their leader, Lieutenant Joseph Turner.  Throughout the campaign, the team partakes in a number of major fights like Operation Cobra, the Battle of the Bulge, and the Battle of Remagen as part of an effort by the Allies to work their way into Germany.  However, tensions begin to rise as Pierson conflicts with Turner over his handling of the troops.  Not helping matters is when Zussman gets captured by the Germans and sent off to a concentration camp, providing the team incentive to push on through with the mission, in spite of the increasing tension. 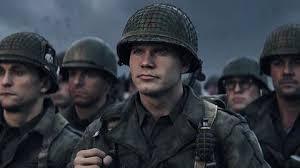 Have you seen any World War II themed movies or shows within the past 70 years?  If so, then congrats, because Call of Duty: World War II's story, characters, and thematic elements are derivative, uninspired, and rely much on recycling material people have already seen before.  Although the cut-scenes are top-notch and feature quality voice work, they're attached to a plot that's not worth caring about.  Daniels and his squad might be at odds with one another, but you never get the true feeling the squad is vulnerable and that any one of them could have something bad happen to them.  The characters are cliches, and their personalities can easily be summarized with one-sentence descriptions.

Worse, the story feels rushed.  A map showing the progress of the troops appears every time a mission is completed, and as the story continues, you notice that it inches closer to Germany, and one assumes that the final mission would take place in the heartland of bratwurst.  Instead, the game ends right as the troops cross over, and everything is wrapped up via a rushed epilogue.  It's a shame the story is forgettable because there are brief glimpses of a compelling narrative interspersed throughout.  Halfway through the game, the squad teams up with the British Special Operations and French resistance to assist with the liberation of Paris.  In this part, you take control of one of the resistance members as she infiltrates a Nazi-occupied hotel to retrieve classified intel.  Had the story put more of a focus at showcasing the big fight from the perspectives of soldiers around the world, it would have made for a better plot, but that is not the case.

Since this is set in World War II, the science-fiction concepts found in recent entries are gone and back is a traditional Call of Duty gameplay set-up with a few twists thrown into the formula.  In a surprise move for the series, there is a traditional health bar instead of regenerating health, so you can't soak up bullets and remove those wounds by hiding behind cover for a few seconds.  The game enforces this notion in the opening mission, which is set during D-day.  You'll make your way up Omaha beach, avoiding gunfire by taking cover and firing shots at the turrets up ahead to momentarily distract enemy forces.  If you stand out in the open for too long, death will be quick.

To heal up, Daniels can retrieve health packs strewn about a stage, or request one from of his squad-mates.  Whereas allies in previous Call of Duty games did nothing more than provide supporting fire, Daniels' partners can provide aid in the form of health packs, ammo, grenades, and can highlight enemies on the battlefield.  Before you can call upon such assistance, a certain number of kills must be achieved.  Though this sounds like the gameplay is more squad-based than prior entries, that's far from it.  Daniels is still a one-man army capable of taking down Nazis with ease, and his buddies act as power-ups that are readily available to the player. 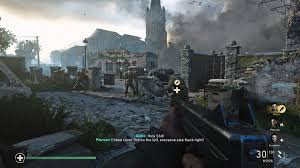 Most of the five-to-six-hour campaign is spent shooting a never-ending supply of Nazi soldiers as Daniels and his squad make their way to the next objective marker; needless to say, this can get old.  Every now and then, the game throws in a segment where you're doing something else besides killing Nazis.  As mentioned prior, you take control of a female French resistance member who goes undercover at a Nazi occupied hotel to retrieve important documents.  Whenever she is approached by an officer, you must choose the right answers, or her cover is blown.  Later, she ditches the disguise, but must use stealth to avoid detection.  Towards the end of the stage, the perspective switches back to Daniels and the group, who come into help overthrow occupation of the area.  This idea of switching perspectives is utilized again when you find yourself controlling a tank, who has to make his way over to help soldiers under fire from Germans.  A similar sequence has you take control of a fighter pilot that must escort and protect bombers from Nazi airplanes.

Though these moments are fun, they're few and far between.  Like the story, Call of Duty: WWII's gameplay is uninspired and lacking in creativity.  Players have shot Nazis in plenty of other games, Call of Duty or otherwise, and though the combat is good and the "ping" sound of an M1 Garand rifle being reloaded never gets old, it doesn't hide the fact that it's the same old shtick but with a new coat of high-definition pain on it.  Every situation Daniels and crew find themselves in feels very scripted; frequently, you'll have to hold off German forces, only for the enemy to retreat once a certain number have been eliminated.  The overly scripted nature seeps its way into the objectives as well.  For example, the previously mentioned tank sequence pits the player against enemy tanks that can only be destroyed by shooting them from the side or behind.  Should you try to shoot them in the front, the shell comically bounces off of them.

Besides the campaign, you have the tried-and-true multiplayer and zombies' modes.  Since multiplayer isn't my cup of tea, let's talk about the undead survival mode.  Gone is the light-hearted tone from Infinite Warfare's version, and in its place is something dark, sinister, and reminiscent of games like Wolfenstein.  The set-up is that a group of treasure hunters stumble upon an abandoned town that played host to a mad doctor's fiendish experiments.  The undead and other horrible beasts now roam the streets, so the gang must fight and survive while discovering the origins of this outbreak.

As is the case in previous games, you'll kill zombies and monsters to obtain points, which can be used to open up new areas or purchase guns and perks.  There's a larger emphasis on accomplishing objectives than in the previous entry; much of the town is inaccessible until you track down the power switches, turn them on, and gain access to the doctor's underground laboratory.  Once you do that, it's smooth sailing.  This mode is enjoyable but is fairly easy when compared to the prior games, and some of the tasks one will have to accomplish can be quite unclear without a guide. 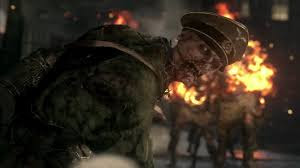 Once again, the game is top-notch both visually and sound-wise.  The added power of the current generation of consoles allows for a visceral showcase of World War II, and the large amount of allied and enemy troops onscreen does a lot to add to the feeling that you're a small fish in a big pond.  Voice acting is pretty good, featuring performances from recognizable actors including Josh Duhamel, Ving Rhames, and David Tenant, to name a few.  The music, with its bombastic tone and usage of percussion and string instruments, is a strong reminder that yes, this is a World War II game.

Call of Duty: World War II isn't bad, just derivative and a bit too predictable for its own good.  The story and characters are cut from the cloth of products like Saving Private Ryan and Band of Brothers, but whereas the characters in those programs had depth and likability, these soldiers do not.  Though it's nice to see a traditional health bar in a modern shooter, this isn't enough to save the gameplay, which is just another Nazis shooting gallery with some power-ups added in the form of Daniels' squad-mates.  Some fun sections are interspersed throughout, the problem is that there aren't enough of them.  Call me crazy, but space combat and an open mission structure can go a long way to keeping things fresh in spite of an aging formula, not by just having an old-school health system.