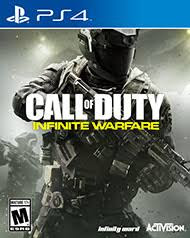 Call of Duty is a long-running series of first-person shooters that's the epiphany of love it or hate it.  Although the franchise has done well financially and critically, there's a vocal group of people out there who loathe the games based on their popularity and other reasons.  Personally, I like the series and have played many of the entries, but I wouldn't consider myself a die-hard fan since there's a wealth of quality shooters out there, some are arguably better than Call of Duty.  What makes this series unique is that the developer is never the same; as of 2018, the studios in charge of making new Call of Duty games are Infinity Ward, Treyarch, and Sledgehammer Games.

Because of this, each game is set during a different time period to avoid repetition.  Recent installments have been set in the near-future, and have utilized science-fiction concepts like robots to reinforce this notion.  In Call of Duty: Infinite Warfare, the fight has moved from Earth and into the stars, as the gameplay puts an emphasis on spaceship fights and many levels are set on different planets.  However, is this enough to make the game a compelling experience, or has the series jumped the shark for no purpose other than to show off?

In the not-too-distant future, next Sunday A.D., resources have run scarce on Earth, faced with this crippling situation, the nations of the world banded together to form the United Nations Space Alliance, UNSA for short, with the intent on colonizing and mining other planets for their resources.  Things hit a snag when a rogue faction known as the Settlement Defense Front, led by Admiral Salen Kotch, breaks off from the UNSA and takes over Mars, where they plan an attack on UNSA forces stationed across the galaxy.  Their first target is Earth.  During a military parade in Geneva, the SDF hijacks the automated defenses stationed around the city, opening fire on the spaceships flying high in the sky.

Nick Reyes, a high-ranking military officer, is there when the attack happens; with the assistance of his allies Nora Seller and a robot called Ethan, they help hold off the invading forces before Ryes and Ethan take off in a gunship to help protect UNSA's spaceships from the SDF.  Many ships are lost in the attack, but one, the USS Retribution, survives, but the captain and executive officer don't.  Since Reyes is the highest-ranking officer on the ship, he is put in charge.  He is then assigned by the UNSA to hunt down Kotch and his associates, and prevent him from carrying out any more schemes. 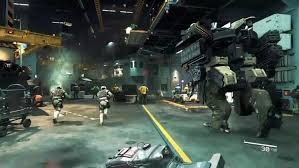 Infinite Warfare's tale of good-versus-evil is a by-the-numbers plot that fails to hold your attention due to the lack of proper world-building and generic villains.  Throughout the campaign, snippets of dialogue and the occasional intel log provide hints of the current state of the universe, but plot point like Kotch's reasoning for hating the UNSA are not properly explained.  Admittedly, it is amusing to think that the enemies Reyes and crew are fighting are Martians, but when their leader is as bland as a pice of unbuttered toast, then any chance of the villain being interesting is lost.  His partners-in-crime fare worse, since they're never given any dialogue and are just targets of interest you take out throughout the campaign.

In contrast to the antagonists, the protagonists fighting the red menace are likeable, interesting, most important of all, characters.  Nick Reyes is the unlikely hero; he's a soldier willing to get the job done, no matter the odds, yet he realizes that by being put in charge of a spaceship and its crew, he has to work with them if they are to succeed.  Besides Nick, other favorites include Staff Sergeant Omar and Ethan.  Ethan is a robot with both intelligence and emotions, and comes off as a robotic counterpart to Nick Reyes.  He's also funny, capable of alleviating situations with a sarcastic quip, none of which feel out of place, nor do they diminish his likability.

Call of Duty: Infinite Warfare's gameplay is a menagerie of old and new elements.  The game retains many series staples, like a two-weapon limit, regenerating health, and linear levels, but it also introduces a multitude of unique ideas, which, even when they don't always work, show that developer Infinity Ward tried to give the tried-and-true formula some new life.  Similar to Advanced Warfare and Black Ops III, mobility is quick and nimble, much more than in older entries, due to the ability to boost jump and run on walls.  Though fun to utilize, many of the levels don't allow the player to take advantage of these skills, and should you try to, any attempts will result in death.

Mission structure has also been reworked.  The Retribution is the hub of the campaign.  After each mission, Reyes returns to this ship; from there, he can pull up a galactic map that allows him to select the next story mission, or he can choose to complete one of the many side missions.  Many of them focus on hunting down and eliminating Kotch's men, but some may see him rescuing hostages or stealing a top-secret device that can help in the long run.  Although side missions are optional, they are extremely beneficial since many of them harbor weapons and upgrades that can't be discovered in story missions.  Plus, these scenarios put an emphasis on what is the biggest shake-up to the Call of Duty series: space combat. 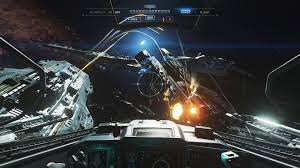 Towards the end of the second mission, Reyes and Ethan get to pilot a Starfighter; in these sequences, you'll shoot down enemy fighters, lay waste to spaceships, and evade bullets and missile attacks by using quick reflexes.  These sections aren't just set-piece moments, but fleshed-out concepts, and smooth controls allow you to effortlessly switch between hover and flight.  Occasionally, there are moments where Reyes exits his ship to partake in zero-gravity shoot-outs, although these parts aren't as plentiful, they're nevertheless enjoyable, especially since you can use a grapple hook to latch onto surfaces and bad guys, the latter of which triggers an instant kill where Reyes breaks their helmet or pulls a grenade strapped on the person, which he then kicks away toward the soldier's comrades.

It's ideas like these which show the developers wanted to do something different with the gameplay many have come to expect from Call of Duty, and they succeed, mostly.  The concepts are great, but they're handicapped by the series' philosophy of shoot bad guys, move to the next objective marker, kill more bad guys, and then trigger a cut-scene/QTE/set-piece moment.  Also, the gun selection is disappointing.  Despite being set in the future, many of the firearms are just variations of modern-day guns, aside from one or two unique weapons.  Fortunately, the gadgets Reyes can use are interesting.  Besides frag grenades, there are shock grenades, which can stun soldiers and incapacitate robots, as well as a singularity grenade that makes enemies float in mid-air.  As well as various grenades, Reyes can use a hacking device to take control of enemy robots for a brief period of time, and he can wield a retractable shield that blocks bullets and can be used to bash enemies at close range.

Depending on how much of the side content one does, beating Infinite Warfare can take anywhere from six to eight hours.  Afterwards, there are multiplayer and zombies' mode.  Since I'm not huge into multiplayer, let's talk about zombies.  Keep in mind, this part only relates to the one stage that's available on the disc, and does not cover any of the available DLC levels.  In the one that's available, an aging film director lures four aspiring actors into an abandoned movie theater.   With the use of black magic, he banishes them to one of his films, Zombies in Spaceland; trapped in a theme-park filled with rampaging hordes of the undead, the four must figure out how to escape.  Fortunately, David Hasselhoff is there to provide a guiding hand. 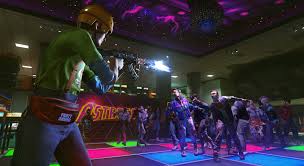 Compared to previous takes on the mode, this version is lighthearted, campy, and self-aware.  Imagine if the film Zombieland was merged with Far Cry 3: Blood Dragon, and that's this level in a nutshell.  By killing zombies and other monstrosities, you earn cash, which can be spent on weapons and perks, plus you can open up new areas of the park.  Tracking down the power switches strewn about will activate rides that you can lure the ghouls into, earning a lot of cash in the process.  Additionally, there are mini-games to play that earn you tickets, which allows players to obtain special gadgets and traps to help stave off the ever-growing hordes.

There's not much to say about the graphics, other than they look great.  The scale of the levels is huge, and the fact there are no load times whatsoever when launching from a planet to outer-space is excellent.  Speaking of which, the planets sport excellent art direction and are pleasing to look at, though the areas set inside enemy spaceships lack variety and blend together with one another.  Sound is well-done.  Brian Bloom, who's better known for voicing B.J. Blaskowitz in the Wolfenstein series, gives a great performance as Nick Reyes.  While the music heard in the campaign is nothing special, the soundtrack in the zombies' mode is fun, featuring a variety of songs from artists like Blondie, Europe, and R.E.M., as well as some catchy synth compositions. 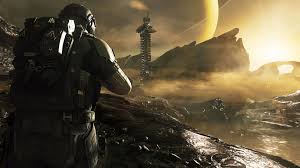 Call of Duty: Infinite Warfare does a lot of things right and is arguably the most unique installment in the series to date.  The flexible mission structure and outer-space combat help the campaign stand out from the ones in previous installments, even if the rest of the gameplay isn't as diverse and more of the same.  However, the story is forgettable and the Martians are, well, just people with a chip on their soldier, but the good guys fare much better, especially with the likes of Nick and Ethan.  Meanwhile, this radical version of zombies' mode is a campy and goofy romp, thanks to its 1980s setting and outlandish personality.  Call of Duty: Infinite Warfare comes close to greatness, yet instead settles for being good.