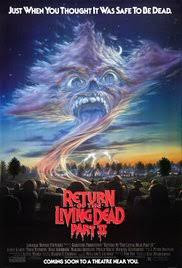 On January 15, 1988, audiences were treated to the sequel to 1985's The Return of the Living Dead.  Written and directed by Ken Wiederhorn, director of the Nazi zombie thriller Shock Waves and the Bill Murray-less Meatballs Part II, this follow-up shows us that the more things change, the more they stay the same.  The military once again loses a barrel of the chemical 245 Trioxin, and when a trio of kids discover the canister in a storm drain, it's only a matter of time before something bad happens.

Soon, the barrel is cracked open, releasing the gas into the atmosphere, and the next thing you know, the dead are crawling out of the ground, on the hunt for brains.  Watch as our characters evade zombies easily distracted by aerobics videos, and who are also capable of driving automobiles.  Throw logic out the window as two actors from the first film are back, practically playing the same characters, and going through the same motions.  All this and more in a film that's like Stranger Things or The Goonies, but with zombies and severed heads with inexplicable Southern accents. 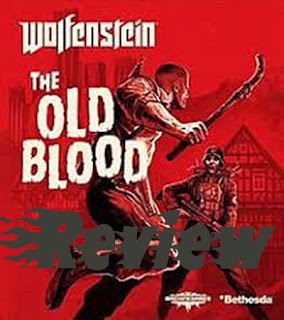 2014's Wolfenstein: The New Order was a surprise for many.  The original Wolfenstein laid out the template for what would become the first-person shooter genre, and without it, many of the top-tier franchises which exist today like Call of Duty, Halo, and Battlefield probably wouldn't exist were it not for this game.  No matter who the developer of the latest installment is, the Wolfenstein series focuses on B.J. Blaskowitz, a soldier who wages a one-man war against the Nazis with the help of either the U.S. army, the OSA, or the resistance group known as the Kreisau Circle.

The New Order kept the concept, but took it in a new direction, showcasing a horrific alternate future where the Nazis won the war and rule the world.  The game had a great mixture of storytelling and gameplay, and it's arguably one of the best shooters in recent memory.  Released in 2015, Wolfenstein: The Old Blood goes back to the past, B.J.'s past, and shows what led up to that fateful day when him and the army attempted to overthrow the malicious Deathshead in the closing days of World War II.

Set a few days before the events of the New Order, the Old Blood follows B.J. Blaskowitz, who is deployed on a mission from the OSA to infiltrate Castle Wolfenstein disguised as a German officer.  His objective is to locate documents that detail the location of Deathshead's base.  While searching, B.J. is captured after his cover is blown, and he is imprisoned.  After escaping, B.J. learns the documents are actually with Helga von Schabbs, a Nazi archaeologist who's investigating ruins in an adjacent town for an artifact of unknown power.  Along the way, B.J. works with a local resistance to overthrow the Nazi's grasp on the town of Paderborn, which is where Helga currently is.  However, during his investigations, B.J. leans there might be more to this artifact than what Helga knows. 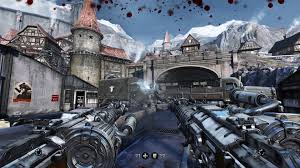 While Wolfenstein: The New Order's story had a proper balance of realism and spectacle that worked well to the advantage of the game, Wolfenstein: The Old Blood puts more of an emphasis on action and adventure, with a dash of fantasy thrown in.  It's a game that's more in lieu with the likes of Return to Castle Wolfenstein and the 2009 title; in fact, this installment borrows much from Return, primarily its plot and characters, namely Helga.  Regardless, this is a fun, pulpy adventure, but there are occasional moments of drama injected into the plot which feel awkward and unnecessary.

When B.J. reaches Paderborn, he meets Annette and Kessler, who provide him with assistance as he carries out his mission.  Later on, there's a half-baked recreation of the Fergus/Wyatt decision from the New Order that lacks impact since these two don't have much screen-time and the effects of your decision don't dramatically affect the narrative like they did in the previous game.  In short, it's an unnecessary, grinding halt.

Wolfenstein: The Old Blood retains the excellent combat from the prior entry, and though the mechanics remain the same, they are still satisfying.  However, the game starts on rough ground by focusing on stealth for roughly the first hour-and-a-half of the campaign.  When B.J. breaks free, he only has a pipe, which I'll discuss later, that he can use to dispatch guards and robots once they have been disabled.  Escaping Castle Wolfenstein's prison barracks overstays its welcome a bit too long, but once B.J. finds some guns, the action picks up tremendously.

Gunplay is great; most of the firearms are lifted from the New Order, such as the pistol, the assault rifle, the auto-shotgun, and the double-barreled shotgun; plus, they can be dual-wielded for maximum carnage.  Luckily, two new guns are introduced in the form of a bolt-action rifle and a pistol-like weapon that fires off explosive rounds like a grenade launcher.   The rifle is great for picking off foes from afar, while the launcher is useful when confronting stronger bad guys.  As stated earlier, B.J. acquires a pipe that can be broken in two to scale walls, smash obstacles, or silently take out enemies.  In each stage, there are areas populated with enemy officers, and if B.J. is spotted, the captain will be alerted and reinforcements will pour in and keep doing so until the officer is dispatched.  Fortunately, the game allows players to approach these encounters whichever way pleases them, so you don't have to stick with stealth. 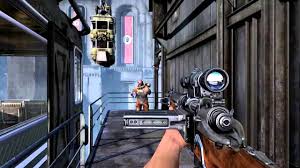 Similar to the guns, the enemy roster is familiar, with a new foe added into the mix.  There are regular Nazi soldiers, heavily-armored variants which charge B.J.'s position with a shotgun or explosive weapon, as well as mechs that take a lot of ammo to bring down.  Then there are zombies, you heard right, the undead.  Late in the campaign, Helga finds what she is looking for, but it unleashes hell on Paderborn, turning civilians and soldiers alike into shambling corpses.  These creatures are slow and easy to take down, but can easily overwhelm you with their numbers; also, the soldiers you fight can turn if they're shot up enough, which is useful for distracting the guys shooting at you.

While Wolfenstein: The Old Blood is a satisfying song and dance, the game retains the same issues found in the New Order.  The enemy AI constantly fluctuates between smart and stupid, especially during stealth segments; in those scenarios, they never show any surprise when one soldier stumbles upon his suddenly dead comrade, and there were times when poking around corners that a soldier failed to notice B.J. staring right at him.  Another problem is picking up items.  Generally when one walks over armor, ammo, or health, the character picks it up, not in the Old Blood.  For every bullet, helmet, health pack B.J. sees, you must press the pickup button for him to acquire it.  Personally, I ever had a problem with this, but for others, I can see how this can be a nuisance.

Wolfenstein: The Old Blood runs on the idTech 5 engine, which was also used for the New Order, and the game looks pretty good.  Gunfire and explosions pack a punch, and the gothic architecture of Castle Wolfenstein and the old-time feeling of Paderborn are a nice change of pace from the industrial motifs seen in the previous game.  Sound is also well-done; Brian Bloom gives a great performance portraying the heroic Nazi slayer B.J. Blaskowitz, and the character is more likable and not as melodramatic as he was before.  The rest of the cast is just as good, and most of the German-based characters speak in their native tongue, which is a nice touch. 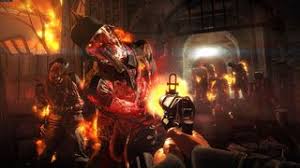 Wolfenstein: The Old Blood is more of the same and proud of it.  Eschewing the dramatic nature of the New Order in favor of a more adventurous tone does a lot to keep the experience exciting.  The gameplay, while recycling a lot of ideas from before, is still excellent.  The shooting feels great and is flexible, meaning you can approach combat encounters whichever way you choose and not get punished for using one method over another.  Solid level design adheres to this notion, and for those who like looking for secrets, there are plenty to find.  What this game lacks in surprises is more than made up for by its fun.


Posted by William Lowery at 1:00 PM No comments: