"The best laid plans of mice and men often go awry," this quote comes from the poem "To a Mouse, On Turning Her Up in Her Nest with the Plough" by Robert Burns, yet it's a quote that neatly summarizes how this year's output on the blog turned out.  In last year's editorial, I talked about how I hit my stride when it came to writing reviews and getting them out at a reasonable time, and when the year started, things looked like they would play out smoothly, but that wasn't the case.  2017 turned out to be a year where some, but not all planned reviews came out, and writer's block was the dominant force.  Yet, why did things turn out the way they did?

The answer is simple: reality.  In a perfect world, all of my reviews would come out on time, but for anyone that creates content in written or video form, he or she knows that what goes on in your daily life can unexpectedly overshadow what you create, such was the case for me.  For those who don't know, when I'm not writing about recently-released games, games from the past, or well-known and unknown movies and anime, I go to college, have a part-time job at a pizza place, and take martial arts.  When I started college back in 2015, I managed to keep all four of these major life aspects in check, but in 2017, things got out of control.

Simply put, I was working too much, and though it didn't hamper grades tremendously, it significantly affected my time devoted to martial arts and writing.  At first, my schedule had been bumped up to working Mondays, Fridays, and Saturdays, which was fine.  Yet, in 2017, Wednesdays were thrown into the mix as well.  Worse, on some weeks, I was scheduled to come in on days when i went to karate, which bugged me whenever that occurred.  It eventually dawned on me during this summer that if this kept up I would have to do something about it.  When I first started working in the summer of 2015 and going into 2016, I enjoyed my job and liked working with my employees, but when our workplace got a new boss in August of last year, it dawned on many of us that he was intended on making us into machines whose sole purpose was to make pizzas, and in turn, make money, all the while zapping away the enjoyment of our job positions and working with others.

Based on that strong tone, one would assume I eventually left, but that wasn't the case.  In an ironic twist, our then-current boss left in August and we got a new manager, one who had been part of the workforce ever since I started working.  With a new year of school rolling in, I managed to get my schedule rolled back to Fridays and Saturdays, which felt great.  I was at peace knowing I would be able to properly devote time to school, karate, and writing, and I've felt rejuvenated ever since I started back school.  However, one thing I have been doing is laying low on writing, occasionally publishing reviews when I can, if only to relax myself back into the swing of things.

Speaking of which, I can confidently say you can expect a return to form next year.  Game reviews will dominate the first half of 2018, with movie and anime reviews taking center stage in the summer, and Drive-In of Terror shall be back and with a vengeance in October.  Additionally, Cubed3 exclusive reviews will be more frequent as well.  Combine that with my new, freelance-writing gig at VHS Revival, and there will be a lot of content readers will be able to view that isn't published directly on to the blog.

2017 has been a year of trials and tribulations, but rather than give up this glorious endeavor, I am going to keep on trucking and continue with what I started back in 2015.  With the way things are looking now, it's best to say that the future's so bright, I gotta wear shades.
Posted by William Lowery at 9:43 AM No comments: 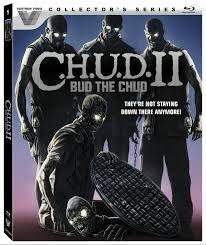 In my first review for VHS Revival, I ask the age old question, "What would happen if you took a 80's classic like Night of the Creeps or Return of the Living Dead, and added in a dash of Saved by the Bell?"  You get C.H.U.D. II: Bud the Chud; sure its connections to the original are tenuous at best and the violence is very tame and makes you question why this has an R-rating, but its got Gerrit Graham playing a zombie-er-I mean C.H.U.D.  Plus, where else can you see a movie where said titular monster has his own rockin' theme song?