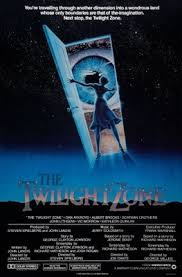 You travel to another dimension.  A dimension not just of sight and sound, but of zaniness and intellect; a place where one man follows his goal of reviewing whatever he can get his hands on, so long as it isn't related to unholy terrors like The Garbage Pail Kids Movie or Manos: The Hands of Fate.  In this regard, you have just crossed over into the territory known as GamerGuy's Reviews.  Submitted for your approval, a review focusing on a film, but not just any ordinary picture, but one that is based off what is arguably one of the greatest television shows ever made.  That movie is 1983's Twilight Zone: The Movie.

Like the landmark series, the film features four, separate stories, each created by their own director who brings their style to the forefront in these productions.  Before the first segment kicks off, we are treated to a prologue where two men, played by Albert Brooks and Dan Aykroyd, cruise down the open road as music plays.  When the tape malfunctions, they begin discussing and play a game where one person hums a song to a TV show, and the other must figure out what it is.  This series of events leads them into a talk about The Twilight Zone and their favorite episodes, before Aykroyd's character tells the driver to pull over so he can show him something scary.  Said fright involves him turning into a blue demon that strangles the man to death.

Afterwards, the movie begins proper with the story "Time Out."  A businessman named Bill Connor (Vic Morrow) arrives at a bar with his buddies, infuriated that he lost a potential promotion to another individual, who was Jewish.  With frustration boiling, he launches into a rant about how he thinks other races are receiving bigger and better opportunities while those who are white don't.  This makes many of the customers mad, but when Bill storms out, he finds himself in Nazi-occupied France.  Confused as to what's going on, Bill is forced to run and evade the Nazi forces, who believe he is a Jewish man.  Soon, he ends up at a Klan meeting, about to be hanged by Klansmen for being black.  He escapes, only to land in the middle of the Vietnam War under the assumption by U.S. soldiers that he's a Vietnamese soldier.  Lost and unsure as to why he's hopping between these different eras, Bill eventually realize that this is punishment for his racist beliefs. 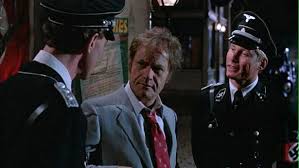 Following this gloomy scenario is "Kick the Can."  An elderly man (Scatman Crothers) arrives at a retirement home, noticing that the people there are miserable and hate the fact they are old and have been abandoned by their families.  Seeing this, he invites to play Kick the Can at night; when this happens, the old folks are young again, and relish the chance.  Next is "It's a Good Life."  Helen Foley (Kathleen Quinan), a schoolteacher, accidentally damages a kid's bike while leaving a diner to continue her travels.  She decides to take the boy, Anthony (Jeremy Licht), back to his home, where she is greeted by his overly generous family once she arrives.

Unbeknownst to her, Anthony is gifted with powers that allow him to do whatever he wants; this, this has the family on edge since one wrong move might mean facing the wrath of the young boy.  Finally, "Nightmare at 20,000 Feet" tells the story of John Valentine (John Lithgow), an author whose fear of flying has him in constant anxiety.  Making matters worse, an unusual creature shows up and starts tearing apart one of the wings of the plane he's on, but whenever he tries to their attention on the matter, it disappears, making those on the flight question his sanity.

As stated earlier, all four segments, plus the prologue, are handled by different directors, including John Landis, Steven Spielberg, Joe Dante, and George Miller.  Not only do they bring their own style to the table, but there is a shift in quality with each segment.  The introduction, directed by Landis, is misleadingly calm before it's surprise ending.  The way this part plays out is like a scene from the beginning of An American Werewolf in London, also directed by Landis, where two hitchhikers get attacked by a werewolf while walking down a dark road and talking with each other.  Yet, the transformation and attack at the end of this part is more surprising than it should be, since what you think might be a simple joke turns out to be a lot more than what both the driver and the audience bargained for. 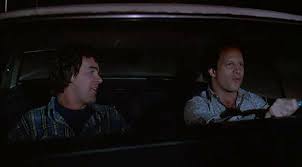 Though it succeeds at foreshadowing what is to come, the following segments are uneven in quality, to say the least.  On the surface, "Time Out" has an interesting premise regarding the consequences of prejudiced beliefs, but it's shaky pacing and abrupt ending makes the whole experience feel rushed.  Vic Morrow is good as the angry, racist businessman who receives the mother of all punishments, but as one watches his character Bill Connor get flung through these different time periods, you feel that there should be a lot more to what's going on.  Unfortunately, just as it picks up steam, it ends, and not in a pleasing way.

There is a reason for "Time Out's" abrupt closure, one that is very tragic.  Initially, Bill Connor was to have a redemption moment, something that would bring his trials and tribulations full circle.  The sequence involved Bill rescuing a pair of children as a Vietnamese village is getting bombarded with aerial attacks.  Sadly, while shooting the scene, the pyrotechnics that were being used set the rotary blades of a helicopter on fire, causing it to spin out of control and crash on top of Morrow and the two child actors involved in the scene.  Accidents during a movie that result in the death of somebody are tragic and unfortunate, and when these events happen, it veers the direction of a film wildly off course.  In the case of "Time Out," it left the filmmakers with no other choice but to end the segment on a dark note, one that is a reflection of the incident that happened.

Not helping matters is that the next segment, "Kick the Can," is arguably the weakest entry, which is odd, considering the impeccable talent whom was responsible for bringing this story to life.  A remake of the episode of the same name, "Kick the Can" explores the concept of how we handle age with all of the intensity of a Hallmark movie.  Director Steven Spielberg tries to tug on our heartstrings with its images of old people who are young again thanks to the magical powers of Scatman Crothers' character, but instead of being whimsical, it's a bore. 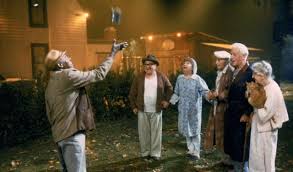 Fortunately, there are three things that save this part from being a total flop.  The first is Jerry Goldsmith's score, which is warm, inviting, and it fits the tone of the segment.  The next is Scatman Crothers as the kind, old man who shows the senior citizens that just because your old doesn't mean you can still be active and youthful, mentally speaking.  Finally, there is a decent message behind this act about how we shouldn't let the fear of old age get to us, and we should accomplish as much as we can in our time on Earth.  Regardless, the mediocre quality of "Kick the Can" makes Kingdom of the Crystal Skull look like Saving Private Ryan.

Despite an uneven first half, the remaining two stories, "It's a Good Life" and "Nightmare at 20,000 Feet," pick up the pace tremendously.  While both are remakes of episodes from The Twilight Zone, they each benefit from their updated premises and increased production value.  With "It's a Good Life," Joe Dante retains the darkly humorous nature of the original episode, yet adds in a new character that may be able to turn Anthony's powers into something good.  Still, as you watch the segment unfold, the tension is incredibly high throughout, as Anthony's family pleases the demands of him to avoid incurring his wrath. 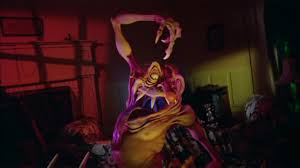 Additionally, this segment boasts a unique visual style that shines in the design of the house, as every section is based on the old cartoons Anthony likes.  There are also some inventive special effects on display, including a grotesque, monstrous rabbit and an out-of-control cartoon character that jumps off the TV screen and into the real world.  It's during these parts that you can tell this is just foreshadowing for Dante's next project, Gremlins.  Plus, like most Joe Dante films, veteran actor Dick Miller pops up in a small role as a diner employee.

Finally, "Nightmare at 20,000 Feet" takes the suspense and paranoia of the original and cranks the dial up to eleven.  Thought William Shatner in the original was paranoid?  John Lithgow's anxiety-ridden, manic behavior makes Shatner's take look mentally stable in comparison.  Given his fear of flying and uneasy composure, it's understandable that both the passengers and the crew doubt his claims that there's something on the wing of the plane trying to cause a crash by tearing off pieces and throwing them through the engine. 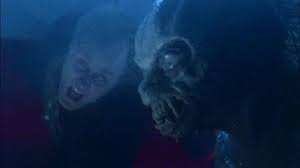 Speaking of which, the remakes takes what is an arguably goofy-looking creature and turns it into something that is most assuredly scary.  It's tall, slender, and has a wicked grin, indicating how much he enjoys causing mayhem.  It also knows how to do jump-scares right.  In the film's highlight, Valentine tries to get some rest to calm his nerves, but his curiosity tries to get the better of him, and when it does, he comes face-to-face with the beast itself, and in a split-second shot, his eyes bulge right out of his sockets.

Twilight Zone: The Movie is the very definition of a mixed bag.  Although it starts on a promising note, the first half leaves much to be desired, with one story that's a promising endeavor that is cut too short, and another that bores, a shame considering the person responsible for it.  The second half helps the film find its footing, yet one feels that the picture could have done more.  With only one original story and three that are retellings, Twilight Zone: The Movie doesn't quite live up to the pedigree of the series this film is based on.