Franchises never die, plain and simple.  Even after the story has reached its conclusion, there will be continuous demand from the fanbase for more.  Sometimes, the requests can be satisfied; after all, ten years after the release of Star Wars Episode III, we got not just a new trilogy of Star Wars movies, but spin-off films as well.  Yet, there are many instances where the promised new entry never happens.  For a long time, there was loose talk of Ghostbusters 3, and every time the project looked like it would get off the ground, a snag occurred.  It took so long for a new movie that one of the key actors, Harold Ramis, passed away, hence the existence of the 2016 reboot.

So, what does all of this have to do with Evil Dead?  Like Ghostbusters, there was a lot of talk about a fourth entry starring everybody's favorite demon slayer, Ash Williams, yet nothing arose.  Eventually, the story continued in 2015 with the excellent TV series, Ash vs. Evil Dead, but during the mid 2000's, publisher THQ took the chance to capitalize off of the popularity of the series and the demands of the fans by releasing three different Evil Dead games, starting with Evil Dead: Hail to the King, released in 2000.  Then came the sequel, Evil Dead: A Fistful of Boomstick, released in 2003.

After eradicating the Deadite menace once again in Hail to the King, Ash has been in a state of depression every since his girlfriend, Jenny, died in a bus accident.  While drowning his sorrows away at a bar in Dearborn, Michigan, a local public access show, Mysteries of the Occult, is filming a live episode featuring an interview with a friend of Professor Knowby, Professor Eldridge.  To carry on what his colleague started, Eldridge has been investigating and analyzing the infamous Necronomicon Ex Mortis, a.k.a. The Book of the Dead, going so far as to write a book exploring its history and mythology.  Unlike Knowby, he doesn't believe the book poses any threat, and proves this by playing the recordings of Knowby reading the passages.  Immediately, a portal opens up above the TV station, unleashing evil spirits all over Dearborn.  Realizing the Deadites are back, Ash jumps into action to figure out how to close the portal and to confront Eldridge for his grave mistake. 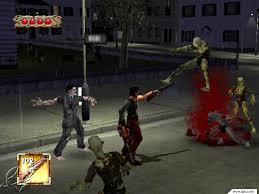 Evil Dead: A Fistful of Boomstick's story is serviceable, if a bit too predictable since the major beats are obvious and can be seen from a mile away.  Without going into too much detail, let's just say some characters have ulterior motives regarding the Necronomicon, and Ash is going to teach them a lesson for meddling with the forces of evil.  Speaking of which, Ash is the most developed out of the cast; like his film counterpart, he's cocky and in over his head, but when people are struggling how to eradicate the monsters, he knows the easiest thing to do is to slice and shoot.

Another positive is the creativity in how the writers explore the concept of time travel, which was introduced in Army of Darkness.  As the game progresses, Ash finds himself traveling between different time periods to stop the Deadites.  Said eras include Colonial America, Civil War-era Dearborn, and a post-apocalyptic version of present-day Dearborn; even better, he'll also assist his ancestors and acquire weapons pertaining to the current setting.

Eschewing the survival-horror mechanics of its predecessor, this is an action-adventure, open-world game in which players will slaughter hordes of Deadites, complete tasks, and find items necessary for progression and survival.  Levels are small sandboxes that allow the gamer to freely explore the surroundings and accomplish objectives in whatever order as they please.  When the game begins, Ash only has his sawed-off shotgun and a shovel found not too far from the starting point.  Weapons can be held in both his left and right hand, with firearms and melee weapons occupying his left, and strap-on devices like the chainsaw useable in his right hand.

There's a sizable selection of weapons for Ash to find throughout the campaign; besides a shotgun and shovel, there are also handguns, swords, throwables like dynamite and Molotove cocktails, plus crazier contraptions like a flamethrower and Gatling gun.  All firearms take ammunition, which can be picked up from fallen enemies or by searching the environments.  Combat itself has a strong, arcade feeling to it, and in certain regards, is a refined version of the fighting system from State of Emergency, an earlier title by developer VIS Entertainment.  Like that game, Ash is constantly swarmed by large groups of Deadites asking to be sliced up or shot, both are which are satisfying to pull off thanks to a snappy lock-on system and some cool combo moves. 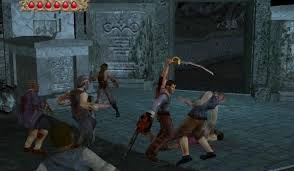 Yet, the mechanics aren't perfect; eliminating Deadites and other monstrosities at long or medium-range is manageable, but when they're up close, fighting them is clunky, as there's a slight delay whenever pivoting Ash in different directions; thus, it allows the bad guys to pull off a lot of cheap shots.  A block is available for use, but due to the delayed reaction time, it's best to stay mobile.  Also, bad guys are capable of pinpointing your exact location, regardless of where you are, and even when normal humans are nearby, they'll still focus on Ash.

Besides an eclectic selection of firearms and other devices, Ash acquires a spell book that can be filled with spells throughout the game.  Some of them act as offensive measures, like launching a lightning storm or a meteor shower, but many others are for solving puzzles.  Specifically, a multitude of spells allow Ash to possess different Deadite types; for example, there's an area filled with undead protecting mission-critical items, so the player needs to find a spell that can allow Ash to take control of one of them; then, he can sneak in, grab the stuff, and head out without firing a single bullet.  Using spells takes up energy, but getting more is tedious since it only drops from enemies, and in small portions.  Whereas health can be filled from dead foes or health packs, no such items exist for magic.

These issues pale in comparison to A Fistful of Boomstick's biggest problems, the lack of a map and easy boss fights.  Initially, finding your way around isn't much of a hassle, but in later stages, it can be a pain to figure out where you're supposed to go due to the winding nature of levels and lack of architectural variation, the latter which adds to the feeling you're wondering around in circles.  I'm not afraid to admit there were times when I caved in and pulled up a walkthrough, something I usually don't do, only because I didn't want to be stuck in this endless cycle of looking for clues.

Then, there are the boss fights, which are a joke, to say the least.  Each beast has very obvious weaknesses, and in most cases, the fights start Ash off with the required tool necessary to defeat them, so you don't have to worry about figuring out the solution yourself.  As such, these grotesque creatures can be taken down within a matter of minutes; additionally, the game is short.  When you know what you're doing and not lost, beating the story can take roughly five to six hours.  Aside from a challenge mode, which involves killing Deadites within a time limit and under different parameters, the replay value is low.  Although there are cool extras you unlock after each stage including concept art and an enjoyable "Making of" video featuring Bruce Campbell. 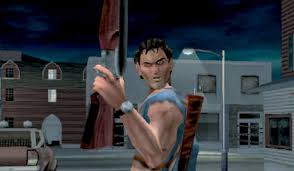 Visually, the game is nothing to write home about.  The high on-screen enemy count is cool, but the whole package looks average with basic and uninteresting designs for both the locales and civilians that inhabit the stages.  Also, for some reason, Ash's face looks like somebody pressed an iron on him.  Sound doesn't fare much better.  As expected, Bruce Campbell is great as Ash; the remainder of the cast gets the job done, but do little to stand out, same applies to the music.

Evil Dead: A Fistful of Boomstick delivers chaotic action by the boatload and features some cleaver ideas, but it's held back by confusing level designs, lack of challenge, and an underwhelming presentation.  Though not bad by any means, the game lacks memorability and had the issues been straightened out, this could have been a hidden gem.