When somebody thinks of icons of horror, specifically directors, there are many names that come to mind like Alfred Hitchcock, John Carpenter, George Romero, and more.  One director whose name definitely ranks up there with the others is Tobe Hooper.  In 1974, the man leapt onto the scene with his film The Texas Chainsaw Massacre.  It was a movie that showed audiences the genius of a man who was able to get under peoples' skin through creeping, psychological terror, plus occasional violence, in a film about a group of friends stuck near a house of lunatic individuals.  Not only that, but this landmark picture also debuted one of the iconic monsters of the genre, the infamous chainsaw-wielding psychopath known as Leatherface.

Suffice to say, Tobe Hooper had a remarkable approach when it came to making movies within the science-fiction and horror genre, often finding ways to make it interesting or show us something that hadn't been seen before.  1982's Poltergeist offered a mixture of Hooper's macabre imagery with Steven Spielberg's fascination with the fantastical and family bonding under tense circumstances.  However, the most interesting movies he created arguably came during his tenure with Cannon Films, in which he produced three different movies, one an original work (Lifeforce, 1985), another a sequel to one of his earlier titles (The Texas Chainsaw Massacre 2, 1986), and the last one a remake of a 50's invasion flick (Invaders from Mars, 1986).

Though Tobe Hooper is no longer with us, his impact and legacy on cinema shall not be forgotten, and his movies will continue to attract more and more people to his work in the many years to come.

Posted by William Lowery at 11:19 AM No comments: 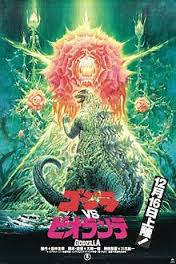 His foot stomps shake buildings, citizens flee in terror at his sight, and the army can do nothing to stop the force of nature that is Godzilla.  Over the course of his sixty-plus year film career, the King of the Monsters has faced and defeated his share of bizarre yet memorable monsters.  From three-headed space dragons to giant moths and even a creature made of pollution, at some point, you think the people at Toho Studios would run out of ideas for new monsters, yet they don't.  However, in the case of the monster Godzilla confronts in this film, its creation was not the result of a studio writer, but a dentist, of all people.

After the release of The Return of Godzilla  in 1984, Toho held a contest in which people could submit their own drafts for the next installment in the series.  The winner got his story about Godzilla fighting a giant plant turned into a motion picture, while the guy in second place saw his script get turned into Gunhed, that magnificent film about a super-computer trying to take over the world, but whose plans are thwarted by a bandit, his robot, and a pair off annoying kids.

(WARNING: MAJOR SPOILERS ARE AHEAD) 1984.  The city of Tokyo is in ruins after Godzilla's attack on the metropolis.  As teams of clean-up crews remove the debris, a secret spec-ops team from America steals a sample of Godzilla's skin from the rubble.  In the process of fleeing the authorities, though, a Middle Eastern man working for a research company located in Saradia flanks and kills them, taking the sample back to his home country.  There, one of the scientists, Dr. Shirigami (Koji Takahashi), is assigned to a project related to the DNA, but he is not able to start it as an explosion at the facility he works at kills his daughter Erika (Yasuko Sawaguchi).  In the years since the incident, Shirigami has moved to Japan where he conducts research on telepathy with the help of Asuka (Yoshiko Tanaka) and a young psychic named Miki (Megumi Odaka). Eventually, the doctor is approached by the Japanese government to help develop special bacteria that can get ride of nuclear material, but more importantly, cripple Godzilla, who has been trapped inside a volcano since the events of the prior film.  He agrees to their request, but also asks for permission to use some of Godzilla's DNA which they have stored away, and on a dark and stormy night, he merges the cells of Godzilla with that of a rose and his daughter's cells to create a new species of rose, or so he thinks.  When a pair of men from America and the Saradian assassin from the beginning both try to and steal the samples of Godzilla, Shirigami's creation attacks the three and flees.

Trapped in the volcano, Godzilla eventually escapes when the Japanese government fails to meet the demands of the American organization Bio-Major, and explosives set around the mountain detonate, allowing the King of the Monsters to be released from his imprisonment.  While this is happening, the plant monster has set itself up in a nearby lake, growing to tremendous size in the process.  When Godzilla confronts the creature, known as Biollante, he defeats it, and continues to rampage across Japan.  Thus, the government scrambles to find a way to stop the monster, before it's too late, and worse, they may not have seen the last of Biollante.

Godzilla vs. Biollante is unique from prior entries in that its concepts are ones that haven't touched beforehand; specifically, the idea of science gone awry.  Whereas monsters such as King Ghidorah, Rodan, or Mechagodzilla were either outer-space entities or prehistoric creatures revived by atomic testing, Biollante's creation is the result of a man determined to preserve the legacy of his daughter by any means necessary.  In an essence, Dr. Shirigami is a modern-day Victor Frankenstein, someone who believes his work will break new boundaries for the benefit of mankind, but instead harms society.  Not only that, but Biollante's design is interesting.  When we first see it, the creature is essentially a giant rose with multiple fly-trap tentacles, and it's second form looks like a cross between a crocodile and the plant from Little Shop of Horrors.  The trade-off for having a creative design and immense scale, though, is that Biollante is quite arguably Godzilla's easiest opponent, since it is quickly defeated in both confrontations with a few blasts of atomic breath. 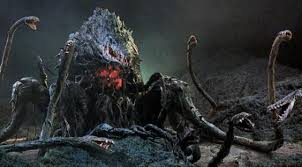 Yet, the film's message of crossing the boundaries of life is muddled by the erratic pacing and numerous tonal shifts throughout the picture.  Indeed, the film's sub-plot about the Americans and Saradians fighting over the Godzilla samples and the bacteria often makes the movie turn into a low-rent spy flick, as a government official and a wisecracking colonel evade double-crosses and chase after the Middle-Eastern hitman in numerous sequences throughout the picture.  It's these moments, combined with non-sequitur comedic scenes that pop out of nowhere from time to time, which take the attention away from the main plot in a way that often detracts from the experience, yet is also unintentionally hilarious because of it.

Of course, a story about espionage and tampering in God's domain wouldn't be complete without characters.  In addition to Shirigami, there's Miki, a young psychic who would become a recurring character for the remainder of the films in the second series.  She's often used to determine where either Godzilla or Biollante currently are, and there's a cool moment in which Miki uses telepathy to try and make Godzilla change his course so as to avoid the destruction of Osaka.  However, the best one, besides the doctor, might be Colonel Gondo (Toru Minegishi), whose free-spirited, wisecracking attitude to every situation he finds himself in makes him a fun watch.  Even when Godzilla kills him later, Gondo manages to get one last one-liner in before the monster takes out the building he's in.

Featuring impressive miniature work and monster costumes, the effects of Godzilla vs. Biollante have held up reasonably well and do a lot to make the combat and destruction scenes even more enjoyable.  There are the occasional wonky effects moments, including a terrible shot of Godzilla swimming underwater that looks like they used an action figure composited onto a green screen, but these are few and far between.   What is generally bad, though, is the dub.  Although the English performances are adequate at best, the audio itself sounds very compressed on the DVD release of this movie, making it seem like the people at Echo Bridge just ripped the sound from a used, beat-up VHS of the picture.  Fortunately, such issues aren't present with the Japanese audio, which just makes the technical quirks of the dub more questionable. 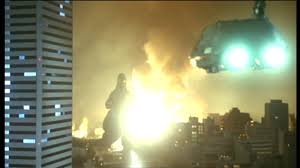 As for the soundtrack, it's an interesting combination of the motifs of Akira Ifukube's iconic compositions and those from American composers such as John Williams and Jerry Goldsmith.  The different styles are most noticeable in parts like Godzilla's first encounter with the military vehicle the Super X-II, which has a track that sounds reminiscent of the Superman theme.  Yet, the highlight is the energetic, action-packed remix of the Godzilla theme heard at certain intervals.  The intensity of said composition makes one think they're watching a different film entirely or even an '80's anime whenever the tune is heard.

Godzilla vs. Biollante is an interesting mixture of old and new.  It has everything people come to expect from the series, like giant monster battles, but also some new concepts like the "science gone wrong" origins of Biollante and the espionage the film sports.  It doesn't always work, especially the wannabe James Bond sequences, but it's nevertheless entertaining throughout and is one of the stronger entries in the franchise.

Cubed3 Exclusive Review: This Is the Police (PS4)

It's been a long time coming, but the free-lancing adventures with a great video-game website continue with a look at the unique title This Is the Police.

Link to review: http://www.cubed3.com/review/4093/1/this-is-the-police-playstation-4.html
Posted by William Lowery at 7:39 PM No comments: