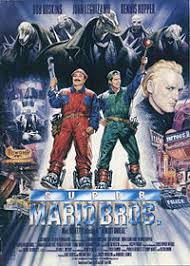 Over the course of this century, film adaptations of comic books and novels have exponentially grown in both quantity and popularity.  Video game-based movies, however, have yet to achieve that same status, and what should be a simple and easily profitable concept has shown time and time again to be a disappointing endeavor as many of them are of poor quality and usually deviate from the source material in a way that is both alienating to fans and confusing to general audiences.  The history of video-game movies is a troubled one, and it all started in 1993 when Hollywood took its first stab at the medium through Super Mario Bros.

In the bustling metropolis of New York City, a pair of brothers, Mario (Bob Hoskins) and Luigi (John Leguizamo), maintain a plumbing business that has found itself in trouble recently due to the rise of the Scapelli Construction Company.  On their way to a job, their van breaks down, and when Mario goes to get water for the radiator, Luigi finds himself in a conversation with a woman named Daisy (Samantha Mathis), who is trying to keep her archaeological site open but faces the threat of closure from none other than Scapelli.  After offering her a ride back to her work-place, Luigi works up the guts to ask her out on a date, to which she agrees.

At dinner, the two are accompanied by Mario and his girlfriend Daniella (Dana Kaminski), but unbeknownst to them, they are being watched by a pair of men, Iggy (Fisher Stevens) and Spike (Richard Edson).  The duo came from a dimension where dinosaurs evolved into humans, and the ruler, King Koopa (Dennis Hopper), is looking for Daisy as she is the long-lost heir to the throne and holds a rock capable of merging his world with that of ours.  Once finished, Iggy and Spike mistakenly follow Mario and Daniella back to her place, and when Mario leaves, they sneak in and capture her, while Luigi and Daisy head back to the dig site.  As they examine some of the findings, pipes burst as the result of sabotage by the Scapelli Company, so Luigi gets Mario's help to close off the leak.

Having just returned from delivering Daniella to Koopa, Iggy and Spike seize the opportunity and grab Daisy, leaving the brothers to chase after them.  Their pursuit leads them beyond Earth and into the world of the dinosaurs, known as Dinohattan.  To Koopa's pleasure, the princess has been captured, but they lack the rock, so a search is issued to find a pair of plumbers.  What they don't know is that while navigating this strange world where beat-up cars ride on electric rails and crime is rampant, the stone is taken from Mario and Luigi by a bouncer named Big Bertha (Francesca Roberts), so when the brothers are captured and jailed sans rock, the king is furious.  Luckily for the duo, they manage to break out, but not before pinning Koopa in a device that de-evolves humans, which causes the ruler to gradually morph into a T-rex as the film progresses. 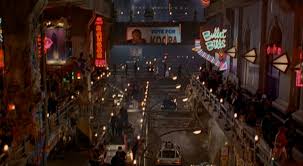 As one can tell by the vivid summarization, the film drastically deviates from the source material in a way that anything people know about the games, whether it be the characters, setting, items, etc., is either present in name only, has been radically altered, or, in rare cases, is true to the source material.  At its core, Super Mario Bros. does follow the set-up of the games, a princess is captured by an evil ruler, and Mario and Luigi must go and rescue her, but instead of taking place in the colorful world of the Mushroom Kingdom, its set in a sprawling, gritty metropolis that is more Blade Runner and Mad Max than a cheery Nintendo game.  However, the city does play host to a multitude of references from the franchise.

For example, several buildings in the downtown section of Dinohattan are named after creatures from the games including Hammer Bros., Thwomp, Bullet Bill, and Wiggler.  There are also appearances by Toad (Mojo Nixon), which is the name of an activist who spends his time singing anti-Koopa songs and not referring to the race of little people with mushroom heads, Yoshi, the little dinosaur capable of swallowing its prey whole, and the Goombas, Koopa's army of big, reptilian creatures with tiny heads and low intelligence.

One could spend all day listing off the number of stark contrasts between this movie and the games it is based off, but what about the quality of the film itself?  Sadly, Super Mario Bros. is not a good movie, while the look of the flick is interesting, if bizarre, and it is entertaining for how off-the-wall the picture is, its biggest issues are a lack of commitment to a single tone, and dull characters.  When the film begins, it starts off as a buddy comedy with Mario and Luigi trying to keep their business afloat, in fact, unlike the games, which don't really play up the plumbing angle of the brothers, the film makes it a major aspect of their characters, which is commendable.  Regardless, when the two arrive at Dinohattan to save Daisy, Super Mario Bros. tries to make the situation as serious as possible, but instead finds itself floundering back-and-forth between comedic and dramatic to no success. 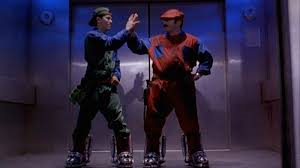 Yet, for as much as the movie struggles to keep a focus throughout its one hour and forty-minute runtime, one aspect it does get right is Mario and Luigi's partnership.  Bob Hoskins and John Leguizamo do a good job at portraying the titular duo, with Mario being the tough yet protective big brother and Luigi the active but reckless one, and there's some fun banter between the two.  On that note, the film deserves credit, to a certain degree, for addressing the matter of what their last name is, as in one scene in the police station, it's revealed that it's none other than "Mario."  Besides the heroic plumbers, Dennis Hopper's manic performance as King Koopa is great to watch.  Even though he's not portraying a giant, fire-breathing turtle and instead a man who dresses like Donald Trump and sounds like Dr. Evil, Hopper does a lot to bring the character to life.

It's a shame that the remainder of the cast lacks that same spark those three actors have, but they do.  As Daisy, Samantha Mathis spends most of the film looking and sounding bored, while Fisher Stevens and Richard Edson fail to deliver any laughs as the bumbling duo of Iggy and Spike.  In fact, Daisy herself is one of the movie's other weak links.  Her character is painted out to be a tragic figure, since her mother was killed after she abandoned her daughter at a church, and her father (Lance Henriksen in a five-second cameo near the end) was de-evolved by Koopa into fungus that has spread all over the city.  Thus, whenever she does have a scene or is in conversation with Koopa or his assistant Leena (Fiona Shaw), it's supposed to be taken seriously, but as an audience, we don't buy it since those moments are often followed up by scenes where Mario and Luigi get into hectic car chases or try to get the rock while evading the Goombas or receiving assistance from unlikely sources.

Of course, the movie's puzzling attitude is the result of a troubled production, as the studio, Lightmotive Pictures, wanted a light-hearted family picture, so much so that the initial script was reminiscent of the games.  However, when directors were found in the form of Rocky Morton and Annabel Jenkel, a married couple best known for the cult TV series Max Headroom, they envisioned a product that was a dark, cyberpunk thriller with a dinosaur twist.  The result was a production littered with constant rewrites of the script and a crew and cast who were less than fond of the people making this picture.  Many of them have expressed their disappointment with the movie, most notably Bob Hoskins.  In an interview with The Guardian in 2007, Hoskins expressed the following:
"The worst thing I ever did?  Super Mario Brothers.  It was a f---in nightmare.  The whole experience was a nightmare.  It had a husband and wife team directing, whose arrogance had been mistaken for talent.  After so many weeks their own agent told them to get off the set.  F---in nightmare.  F---in idiots. 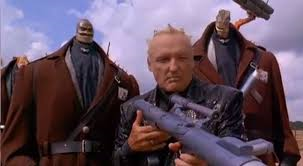 Looking past the behind-the-scenes drama and confusing nature of the writing and characters, the effects and aesthetics of the world created are well-done and are an interesting sight to look at.  The visual effects for when someone is de-evolved or the sequence where Mario is sent through the space between dimensions stand out as the most unique, although some of the animatronic work, particularly for the Goomba minions and tiny dinosaurs scattered about Dinohattan look primitive by today's standards.  Meanwhile, the soundtrack, composed by Alan Silvestri, is solid, with the best track being the upbeat, jazzy theme that is heard whenever Mario and Luigi are onscreen.  Though there are times when the score does sound reminiscent of Silvestri's earlier work, such as Predator and the Back to the Future trilogy.

One part dystopic, science-fiction action-adventure, one part dramatic tragedy, and one part slapstick comedy, Super Mario Bros. is a textbook example of how to not properly do an adaptation, yet also a fascinating watch because of it.  Is it bad?  Yes, but when compared to future video-game movies such as Mortal Kombat: Annihilation, the Resident Evil movie series, and more, it's certainly nowhere near as terrible as those other products.  It's a mess, but an entertaining one.