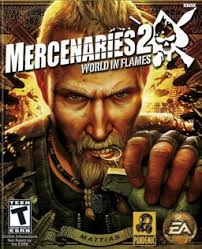 Whenever a beloved individual passes away or a recognizable place closes, there is much grief and disappointment amongst the community, as well as numerous tributes and payments of respect for what they did when they still existed.  In 2009, Pandemic Studios, a company best known for creating the original Star Wars: Battlefront series and the first two Destroy All Humans games, was shut down when the company that owned them, Electronic Arts, laid off several of their own employees and development teams.  The year prior, Pandemic released Mercenaries 2: World in Flames, a sequel to 2004's Mercenaries: Playground of Destruction.  Whereas the original game took the open-world style of Grand Theft Auto and set it in war-torn North Korea, the sequel shifts the focus to sunny Venezuela, a place rife with destructive opportunity.

After selecting from one of three mercenaries, including Matthias Nilsson, Jennifer Mui, and Chris Jacobs, the story begins proper when your selected soldier-for-hire arrives at the mansion of businessman Ramon Solano, who has asked the mercenary to find and locate a rogue general named Carmona, who is hiding on a remote island off the coast of Maracaibo.  Once he's captured, the mercenary returns to Solano to claim their pay.  Instead, the man reveals to the protagonist that by capturing Carmona, he can carry out his plan to take over Venezuela and rule it with an iron fist.  After escaping the madman's mansion, the mercenary decides to enact revenge on Solano, first by working with different groups to gather intel, and then finding and eliminating him. 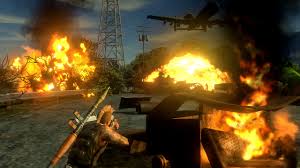 Featuring a plot so basic you could simplify it down to one word, revenge, as well as characters who are defined more by their stereotypes than actual personality traits, Mercenaries 2 provides players with a reason for the ensuing wanton destruction, and not much else.  Regardless of who is chosen, the narrative unfolds the same way every time, with the only significant difference being that you'll hear a new batch of repetitive one-liners from your selected character.

To free Venezuela from the grip of a tyrannical businessman and achieve payback for being betrayed and not paid, the mercenary will formulate their own base of operations from the ruins of Solano's mansion and in turn, work with a multitude of groups, each of whom has their own agenda.  The five organizations, whether it be a petroleum company, a resistance movement, the U.S. army, or China, will give the player contracts to carry out and numerous side tasks to accomplish in one's spare time.  By working with them, cash can be earned and new items will become available for purchase as the game progresses.  The contracts are varied in their objectives, and involve doing things such as rescuing hostages, liberating towns from the Venezuelan army, and blowing up targets to kingdom come.

Not all missions are a total cakewalk as later assignments can be challenging affairs due to the amount of heavy firepower one will encounter, but by amassing a healthy stockpile of weapons, vehicles, and airstrikes to order for delivery, you can even the odds.  Meanwhile, the list of things to do outside of contracts is staggering; from freeing outposts of Venezuelan control to completing races to taking out high-valued targets and capturing people of interest, the game is loaded to the brim with things to do.  Additionally, a wide selection of firearms and other goods encourages the player to experiment with how to approach combat situations, and when in doubt, a good, old-fashioned artillery strike can easily clear a blockade of tanks. 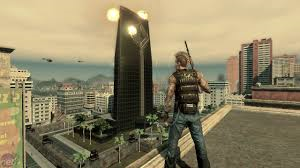 Yet, as a mercenary, your ties to those you align yourself with are tenuous at best, so each faction has a meter dictating the strength of their partnership.  If you start attacking allies or hurting civilians within their line of sight, nearby soldiers will attack and attempt to call their boss to let them know about the mercenary's actions.  Such a factor plays an important role in regards to the high-valued targets you can find and eliminate, as many of them are often individuals from one of the factions the mercenary is helping.  If one of them becomes hostile, you can gain back their respect by paying a hefty fee.  Luckily, the inconsistent AI will result in plenty of cases where you're more than capable of murdering comrades or blowing up a building of theirs and getting away scot free for it.

At its best, Mercenaries 2: World in Flames is a frenetic, action-packed experience that gladly revels in its anarchic mayhem through massive explosions and state-of-the-art firepower, but the multitude of bugs and insipid behavior of civilians, allies, and enemies alike often sours the fun one might be having in a play session.  The glitches can be minor, such as vehicles or NPC's getting stuck in the environment or objects randomly floating in mid-air.  Then there are the more criminal ones, like calling in a supply delivery and the helicopter pilot doesn't show up, or destroying a building, only to witness a bizarre implosion that takes place as the structure collapses.

In addition to those and freeze-ups that can occur, the incompetent intelligence found here ranks up with the likes of the original Dead Rising and Aliens: Colonial Marines with how terrible it is.  Although life in a war-torn country would be a bad experience for anyone, apparently, for many civilians, it's too much.  The mercenary may be freely cruising on the open road or weaving through the streets in the city, only for a pedestrian to spontaneously run out in the middle of the road and become roadkill.  Meanwhile, the soldiers, both good and bad, should all be sent back to boot camp since they often miss more than they hit, and do other inane actions such as throw a grenade, only for it to bounce on a wall and explode in their face.  Additionally, if an ally is on a turret, chances are they will gladly shoot up a vehicle, even when the people inside are long dead and it's now on fire and on the verge of exploding. 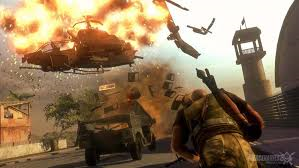 Despite the numerous technical inequalities, the visual quality of the title is good, with varied environmental designs and impressive destruction/particle effects.  Sound, though, is uneven.  The guns sound visceral and the soundtrack combines a classical orchestra with Latin music motifs to create a unique and memorable mixture.  The same can't be said for the voice acting, which is average at best, and get ready to hear twenty variations of lines including "It's the mercenary!"  "Is that our vehicle?"  "The mercenary is here, attack!", as you progress through the game.

Mercenaries 2: World in Flames is a game with many ups, yet just as many downs.  The core gameplay is the title's biggest strength, with onscreen mayhem that is a sight to behold and a wealth of content that will keep players coming back for more.  On the flip side, the lack of polish evident through the bugs and other faults do a lot to try and derail one's enjoyment.  Like an action flick from the 80's, its ridiculous nature and high levels of adrenaline keep the experience entertaining, but there's no denying that it's not perfect.