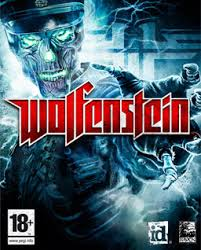 Nazis, they are a group whose name sends shivers down everybody's spine and whose reputation is that of pure evil.  Founded by Adolf Hitler, they had one goal on their mind: become the supreme race on Earth and eliminate those in their way.  Their actions were spiteful and malicious.  They took over Europe, formed an alliance of villainy with Japan and Italy, and most heinous of all, wiped out a large percentage of the Jewish population through different means of extermination.  Yet, they did not get far as through the efforts of the Allied nations, their reign of terror was squashed, and World War II was put to an end.

Their infamous legacy has made them a force of evil that is squashed time and time again by different heroes from all sectors of entertainment.  To keep the opposition from getting stale, though, creators have come up with unique ways in which the Nazis could be even more sinister than they already were, such as turning them into an undead monstrosity, or in the case of the Wolfenstein series, having them experiment with science and the supernatural in their efforts for global domination, a notion which is prevalent in the third installment of the hallowed series, released in 2009.

After taking care of the German menace once again in Return to Castle Wolfenstein, OSA agent B.J. Blaskowitz is immediately put on assignment once again when the agency receives word that the Nazis have set up operations in the town of Isenstaldt for unknown reasons.  Upon arrival, B.J. teams up with the local resistance known as the Kreisau Circle to figure out what is going on.  He discovers that they are searching for rare crystals that can be used to open a portal to another dimension known as the Black Sun, and in turn, harness its powers for their various projects and plans for global domination.  Thus, B.J. sets out to destroy their research and prevent them from using the Black Sun's power for evil. 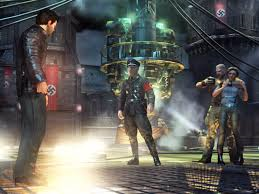 Although its set in a world where Nazis are creating fantastical super-weapons and super-soldiers with the hopes of conquering the world, Wolfenstein's plot is threadbare and its characters, both good and bad, lack personality and depth.  The story's flimsy nature means that there's no real sense of progression in the narrative, and before you know it, B.J. will be armed and ready to stop the Nazis for the umpteenth time at the game's climax.  Not only that, but new villains are introduced so frequently that you'll hardly care about their nebulous intentions and instead focus on killing them so that the credits eventually roll.  However, what the story lacks in detail is made up for by its intriguing setting.  Like Wolfenstein: The New Order, there's a nice balance between reality and fantasy, offering mutated monsters, hi-tech weaponry, and a mystical dimension, all set against the backdrop of one of history's most pivotal wars.

Meanwhile, the gameplay mixes familiar first-person shooting action with a unique mechanic.  Over the course of the campaign, B.J. will shoot hundreds of Nazis and their scientifically-enhanced ranks so that Isenstaldt is liberated from their villainous grasp.  Story missions will see Blaskowitz infiltrating several different locations and sabotaging the Third Reich's plans.  Areas include hospitals, farmlands, zeppelins, and a heavily-armed castle, among others; in between missions, the player can roam the city of Isenstaldt while reaching the next destination.  Unfortunately, there's not much of an incentive to explore the town as the place feels more like a ghost town, save for the occasional scripted shoot-out.

It's a locale that the game never fully commits to, and instead of offering a multitude of things for the player to do like a sandbox environment should, instead, it acts as an unnecessary stop-gap when progressing to the next story mission.  There are collectibles to find, including documents and gold, more on the latter soon, as well as the occasional side task, but its inclusion only pads out what is a short game, taking around four-to-five hours to beat.  Despite this setback, the other major aspect of Wolfenstein's design, combat, fares much better, and is quite fun and creative. 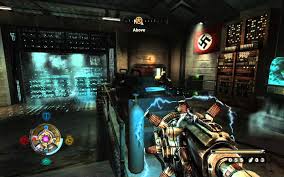 B.J. will acquire a total of eight weapons which can be selected at any time via a weapon wheel.  These include WWII mainstays such as an MP40, MP43, a rifle, and a rocket launcher, along with inventive firearms such as a gun that shoots a constant stream that distenagrates anything in its range, as well as a lightning gun and a firearm that shoots orbs that can send things close to its vicinity flying, or reduce them to nothing.  These tools of destruction can be upgraded by collecting gold and using it at different black market shops set up around town.  With your state-of-the-art weaponry, killing Nazis is a whole lot easier.

Yet, easy is a word that describes the game's challenge, since your firearms, along with a magical amulet, can annihilate the German forces.  Early in the story, B.J. acquires an amulet that fuses him with an energy source called Mire.  With it, players can slow down time to weave in and out of gunfire, project a shield that deflects bullets and other projectiles, and unleash a rage mode that amps up damage for all weapons.  To counter these new abilities, the Nazis have their own Mire-infused soldiers that can project shields to protect their comrades, or use invisibility to get the drop on B.J.  Regardless, these powers, while fun, only diminish the challenge even further, and running out of energy is never an issue as there are plentiful sources for the amulet's energy to regenerate from.  Even then, the Nazis' haphazard intelligence can sometimes result in scenarios where they end up doing themselves in via a poorly-thrown grenade or some other accident. 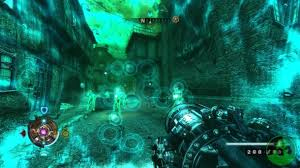 On the technical side, Wolfenstein is a mixed bag.  Environments are well-designed and are, at times, inventive in their structures and layouts, and the flashing muzzle of gunfire and destructibility of the levels makes each shootout a chaotic affair to partake in.  However, the low-res, late-cycle original Xbox character models, framerate hiccups, and occasional glitches add up to a visual experience that is equal parts hit-and-miss.  While the voice acting is average at best, the soundtrack and its bombastic tone do a lot to enhance the action-packed mood of the game.

When it soars, Wolfenstein offers much entertainment through its inventive gunplay and unique set-up, but its faults, of which there are many, hold it back from greatness.  The inclusion of a half-baked, open-world city leaves much to be desired, since it lacks reasons to explore what it offers and thus, is nothing but padding.  Combine that with a lack of challenge and a forgettable storyline and you have a game that's promising in design, but leaves a lot of room for improvement.