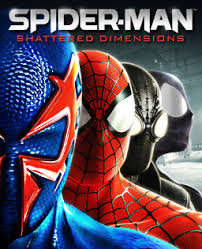 Licensed games, a genre that is often a trick risk for any publisher of developer that tries their hand in this area.  The challenge comes from creating a title that stays true to the source material while also being a compelling experience for both the fans of the property and the everyday human who is just looking for a good game.  Unfortunately, the results are often hit-and-miss, leaning more towards the latter.  Ever property, be it a comic book, a film, or even a toy-line, generally has several titles that are of mediocre quality at best, but when the developer gets it right, there is much critical and financial success.

Unlike other franchises covered in the past such as Batman, Ghostbusters, or Godzilla, the Spider-Man games are solid, save for the occasional missteps, but after the success of the video-game adaptation of Spider-Man 2, every title following that game's release was an open-world affair; thus, the spider's webs began to sag.  However, in 2010, developer Beenox, a studio whose credentials beforehand involved making games based off Dreamworks' movies, dug into the vast lore of Spider-Man to create a title that would shake the formula up, conceptually speaking.

On a dark night, the sinister Mysterio has broken into the New York History Museum to steal the Tablet of Order and Chaos, an artifact with the potential to give him unlimited power.  Fortunately, Spider-Man shows up to prevent Mysterio from taking the tablet, but in the process of stopping him, the web-crawler accidentally breaks the tablet, whose fragments then scatter across to different dimensions of time and space.  Mysterio escapes, but a woman named Madame Web appears to inform Spider-Man of his mistake, and that the fragments must be collected before they fall into the wrong hands.  Said fragments are in alternate dimensions, each with different versions of the iconic hero.  Therefore, Spider-Man, along with his 2099, Noir, and Ultimate universe counter-parts, work with Madame Web to locate the fragments of the tablet before it's too late. 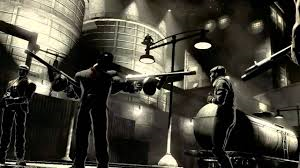 Although the plot itself is threadbare in set-up, where it shines the most is in its writing, which does a great job at giving people an insight into the four worlds that are on display here, while also paying tribute to the fifty-plus years of comic lore created in the wake of Spider-Man's debut.  Every world has its own interesting look and feel to it that influences the attitudes of the characters, both good and bad.  For example, the Noir universe, with its muted colors and gritty atmosphere, calls to mind Frank Miller's Sin City, especially with the multitude of mobster-based antagonists.  Additionally, because each world is set in a different time or realm, each villain that appears has had their personality and design altered to reflect the changes.  This keeps the player motivated to see who the next villain is that one of the Spider-Men will confront in the upcoming stage.

Despite featuring four separate protagonists, they are all united by one concept: gameplay.  Instead of being an open-world experience like the last few games, this is a linear brawler/stealth experience that plays to the advantage of its concept.  Each hero controls the same, but there are mechanics exclusive to each one.  The Spider-Man of the Amazing universe, the default one, is the most traditional, but his stages do have a larger emphasis on platforming in comparison to the other worlds.  Ultimate Spider-Man is like his Amazing counterpart, except he wears the black suit, which gives him access to a rage meter that can be activated once it's full that increases his damage.  Spider-Man 2099 focuses more on close-quarters fighting, and he can slow down time to avoid missiles and enemy attacks.  His parts also feature moments that have him free-falling large distances in pursuit of something or because he is evading falling debris. 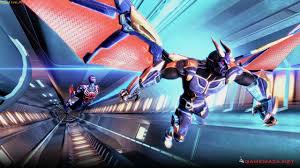 Lastly, Noir Spider-Man and his levels are about stealth, as there are multiple sections that have him sticking to the shadows and webbing up his foes when they aren't looking.  He's also the weakest of the four, if he gets spotted, bullets will easily rip him to shreds; to compensate for this, he has regenerating health.  Combat is good, if somewhat repetitive; the range of enemies is small, consisting of regular foes, ones armed with shields that must be vaulted over, as well as bad guys equipped with a firearm or melee weapon and large henchman who require multiple hits to bring down.  Their intelligence is also erratic; even on the highest difficulty, they aren't much of a hassle to defeat, but there are times when their behavior is just plain dumb, primarily in the Noir stages.  After Spider-Man is spotted, nearby enemies will start shooting at him; however, once he escapes, they automatically return to their positions like nothing happened.  Additionally, whenever one of the stumbles upon their comrade webbed up, they tend to ignore such sight and if they do notice, nothing is done.

Thankfully, such issues do not crop up in the boss fights, which are challenging and require gamers to look for the right opportunities to stun their opponents before attacking them.  By defeating bosses, beating up enemies, and completing objectives, points can be earned to spend on a multitude of character upgrades, unlockable costumes, or new fighting techniques, which are all unlocked by accomplishing challenges found on the Web of Destiny.  Challenges range from simple tasks such as beating a boss or saving civilians, to more trickier ones such as defeating all the foes in the current area within a certain time limit, or finding eight hidden spiders strewn about each level.

However, the in-game objectives you must accomplish are limited in scope and will grow tedious, which is a problem especially prevalent in the stage where Ultimate Spider-Man confronts Deadpool on an oil rig.  In it, there are cameras set up across the environment which he is using to record his game show.  Once a set has been destroyed, a new batch appears.  Though there is plenty of combat and the level has a light sandbox feel, it doesn't help the fact that for most of this level, you're destroying cameras.  If not for Deadpool's sarcastic, biting commentary heard throughout, then this stage would be both tedious and boring. 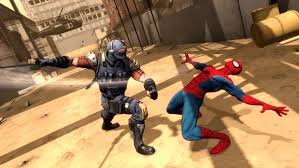 Spider-Man: Shattered Dimensions is truly spectacular, technically speaking.  The game's art style does a great job at emulating the look of each comic utilized in this game, almost as if they have come to life in video-game form.  However, there are a few technical bugs; occasionally, there are moments where the game fails to register the input of the web-swinging button, causing Spider-Man to nearly fall to his death.  Additionally, enemies can get stuck on something and in rare cases, certain sounds will inexplicably become louder than others.  Meanwhile, the audio is solid; the four actors who play the different Spider-Men, Neil Patrick Harris, Christopher Daniel Barnes, Josh Keaton, and Dan Gilvezan, all do great jobs in regards to bringing these different heroes and their personalities to life, a notion which applies to the remainder of the cast.  Yet, the music fails to reach those same standards, and is forgettable.

Spider-Man: Shattered Dimensions excels at showcasing the different takes of a beloved character, and it shows that developer Beenox has a clear love for the web-slinger.  The brawler/stealth gameplay is a nice shift from the open-world formula of titles prior, and though not without its faults, it is enjoyable and features its share of thrilling moments.