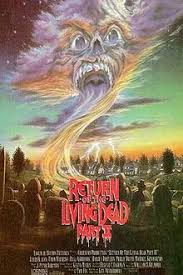 In life, people struggle with finding an effective way of balancing different things which occupy their time, be it jobs, school, or hobbies.  When we do settle into the right groove, there's a strong sense of satisfaction knowing that what seemed impossible has become achievable.  The analogy might seem odd, but it is reflective of the tonal shifts in Return of the Living Dead Part II.  Since the first film made a decent profit on its release, it seemed inevitable that the dead would return for a sequel.  However, writer/director Ken Wiederhorn tips the scale and fills this follow-up with more laughs than frights, but does it work?

On a stormy night in a small town, a convoy of trucks are in route to an unknown destination, and their package is a batch of barrels containing the chemical 245 Trioxin.  One of the drivers, while smoking a joint and listening to music, is too distracted to notice some of the barrels falling out from the vehicle after hitting a bump in the road, which is then followed by one canister managing to roll off the road and into the river below.  The next day, a young boy named Jesse (Michael Kenworthy) is given the chance to visit a clubhouse which belongs to a pair of neighborhood bullies.  Said clubhouse is in the nearby cemetery, and when Jesse tries to flee and hide, the three find the container in a storm drain.

Seeing the number on the drum, Jesse insists that they should call it, but the two roughnecks have better ideas, and lock the kid in the mausoleum.  While this is happening, a trio of graverobbers arrive to dig up and obtain the skulls buried within.  The two men, Ed (James Karen) and Joey (Thom Matthews), head into the graveyard, while Joey's girlfriend Brenda (Suzanne Snyder) stays behind to watch the car.  Jesse escapes and makes a mad dash home, while the two kids investigate the barrel and unwittingly release the gas from within, causing them to develop coughing fits and leave while the gas gets into the atmosphere and causes a storm.  Jesse decides to head back to the cemetery to try and get the number, along the way, he visits the house of Billy (Thor Van Lingen), who is looking much more pale than before.  He returns to the drain and gets the number, only to be confronted by the corpse from the barrel, which he easily dispatches of.

Unfortunately for Jesse, the dead are starting to rise from the grave, and the ensuing mist caused by the rain has seeped into the mausoleum Ed and Joey are at, causing them to get ill.  Once he has returned home, Jesse tries to call the number, but is halted by his older sister (Marsha Dietlin) and a cable repairman (Dana Ashbrook).  One activation of the fire-alarm gives him enough time to run into the parents' bedroom and call the army, who are currently disposing of the other barrels.  However, the calls is cut short as the graverobbers had fled the cemetery and reached the neighborhood in search of help, but in the process, disabled the phone box.  With the dead running loose, Jesse, his sister, the cable guy, the graverobbers, and a neighbor, Dr. Mandel (Philip Bruns), try to seek a way out of town, unaware that Ed and Joey are gradually worsening in their condition. 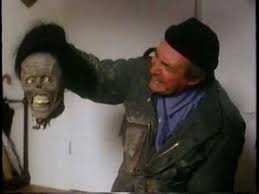 With multiple jokes and gags that see the undead stumbling on one another as they come out of the ground, among others, it immediately becomes clear to the viewer during the sequence of the dead rising that this is a goofier affair than the original.  In fact, the zombies' mischievous behavior calls to mind the Gremlins rather than a terrifying enemy that seems virtually unstoppable.  In addition to an army of slapstick-fueled ghouls, there are people caught in the middle of it all; unfortunately, the characters, save for a few, are either forgettable or obnoxious.  Jesse, the young boy trying to stop the undead menace from spreading, is very likeable simply because of his resourceful nature.  Whereas the protagonists of the first one waited until the very end to call the army for help, Jesse, upon discovering the barrel with the two boys, makes an active effort to get the number and let the military know about the barrel.  Another favorite is the doctor; although some of his lines are cringe-inducing, his off-the-wall drunken behavior makes him fun to watch, as he's more concerned with finding a bottle of booze than a way to defeat the zombies.

Yet, the rest of the cast is a different story.  Tom, the cable-man, is your standard every-man who finds himself becoming a hero as he works with the others to save the day, a notion which also applies to Jesse's older sister.  Then, there are the trio of graverobbers, who's only purpose is to scream and act like nitwits.  Joey and Ed are nothing more than a carbon-copy of Freddy and Frank, right down to them getting sick from the gas and becoming zombies later.  They may be played by the same cast members from before, but that doesn't necessarily mean they should also go through the same motions and use dialogue they had in the first one as well.  Besides, their contributions to the story, along with Brenda's, are minimal, and if you removed them, the only thing that would change would be the run-time. 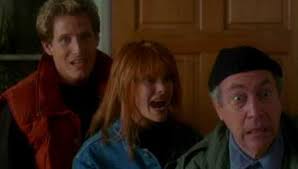 Speaking of which, Brenda, Joey's girlfriend, is a textbook example of people who make bad decisions in horror movies, since everything she does jeopardizes the situation even more.  Examples include but are not limited to the following:
With such "smart" moves as those, combined with a scream so piercing I'm surprised it doesn't kill the zombies, and you have a woman who's like Willie from Temple of Doom, but more obnoxious and a lot less helpful.

Return of the Living Dead Part II's biggest problem, though, is that it plays it safe, often recycling plot points and moments from the first.  The change of location from a small portion of town to an entire city offers potential, and one can see how its idea of zombies on the loose in the suburbs influenced the SNES game Zombies Ate My Neighbors.  Unfortunately, it doesn't take enough chances with its creative potential, especially considering that the place is a ghost town since the entire population was evacuated off-screen.  The only major new addition is that the undead now have a clear weakness, electricity, which does lead to a thrilling climax as the surviving heroes round-up the zombies, lure them into an electric power-plant, and fry them all.  It's just a shame you must wade through eighty-five minutes of mediocrity and hit-and-miss humor just to reach it. Effects-wise, the movie boasts well-done zombie make-up and features some inventive effects, such as a severed hand that runs amok in Dr. Mandel's car.  Although the designs of the undead look more cartoony and the recreation of the barrel zombie is rubbery and not as grotesque, they get the job done.  The music is an interesting scenario; when the film was released on DVD and digital media, the original soundtrack and certain licensed tracks were removed and replaced with compositions that sound like a synthesizer farting.  The original score, which can only be heard via a VHS copy, is fine, if a little too dramatic, and the licensed songs are enjoyable, including "Spacehopper," "Bad Case of Loving You," and an incredibly cheesy cover of "Monster Mash," but it lacks the memorability of the original film's score, a notion which applies to everything else regarding this sequel.

Return of the Living Dead Part II is an uninspired retread of the first movie that has its moments, but leaves a lot to be desired.  The film is at its best when it revels in its over-the-top, comedic nature of events, such as zombies driving a commandeered jeep or a Michael Jackson-look-alike zombie getting electrocuted with the others, but it's afraid to commit to that tone.  Instead, the movie offers serviceable, but extremely by-the-numbers undead entertainment.