In 1968, writers George Romero and John Russo crafted a script about the dead coming back to life to devour the living, which would become Night of the Living Dead.  Upon release, the movie was a hit, and set the standard for zombie movies to come; however, legal issues arose over who owned the rights to the picture, since the film-makers had forgotten to put a copyright notice on it.  The result was that Romero could continue making zombie pictures, including Russo, so long as the phrase "Living Dead" wasn't used in the title.  Meanwhile, Russo got control of the moniker, and he wrote a novel called Return of the Living Dead, with the hopes of turning it into a feature film.  Years later, in 1985, writer Dan O'Bannon, best known for writing the script to Alien, got the chance to make the movie, but in the process, he changed what Russo had written and created a zombie picture with more style and flair than the films of Romero.

On a hot, summer day in Louisville, Kentucky, a young man named Freddy (Thom Matthews) has gotten a job working as a shipping clerk in a medical warehouse.  The boss, Burt Wilson (Clu Gulager), is leaving for the weekend, and has left his assistant, Frank (James Karen), along with Freddy to close the place.  While filling out forms in the office, Freddy asks Frank what's the strangest thing that has been in the place.  Frank tells him how years ago in Pennsylvania, the army was conducting experiments when a chemical spill happened, causing the substance to drain down pipes that ran over a morgue.  The leaky pipes allowed the substance to fall onto the bodies below, and they came to life; therefore, the incident was quarantined and the chemicals and corpses were loaded into barrels that were sent off to be researched by a chemical company.  Unfortunately, the shipping forms got mixed up, and they ended up at the warehouse, where they are being held in the basement.

Therefore, the two of them go to check the containers out, but upon checking the durability of one of them, Frank unwittingly releases the gas, which knocks them both out, and the chemical then seeps into the vents, bringing to life a cadaver held in the freezer.  While this is going on, Freddy's friends are heading to where he's working to pick him up and go partying, even though his girlfriend, Tina (Beverly Randolph), just wants to go out with him on a date, away from the presence of the others.  To kill time and have fun, they go into the cemetery across from the warehouse.  When Frank and Freddy wake up, they feel ill, but also realize that the previously dead body in cold storage is now alive, so they call Burt to come over. 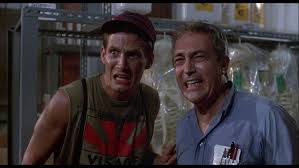 Once Burt arrives, the three decide that they're going to open the door and let the cadaver free, then pin it down and kill it by impaling it in the head.  It's released, but it makes a beeline towards Burt, and when they have the body under their control, a pickaxe is lobbed into its head, but it still lives.  Therefore, the corpse is sliced up, with the intent of taking it over into the funeral home, where a man named Ernie (Don Calfa) runs the mortuary, complete with a crematorium.  After negotiating a deal with Ernie, along with explaining what's going on, the body is burned, but as the smoke rises into the air, it kick-starts a rainstorm, and the resulting rain falls onto the cemetery that Freddy's pals are at.  Tina, who went to the medical facility earlier, finds herself trapped in a room with the now-living body from the barrel.  Her friends arrive, but one of them, a punk named Suicide (Mark Venturini), is killed while rescuing her, and when they head back to the cemetery to find Freddy, they notice the dead rising from the graves, ready to eat the living.

Whereas the likes of Night of the Living Dead and Day of the Dead were grim and dramatic in their depictions of people trying to survive the hordes of the undead, Return of the Living Dead, while serious in tone, also adds an underlying element of comedy and fun into the mix.  The over-the-top nature of many of the events, combined with the terrified reactions of the characters, ends up making the audience laugh at the foibles of the people caught up in the situation.  A headless cadaver running around like a chicken might seem terrifying, but given how ridiculous it looks, one can't help but laugh at such a sight.  Like Gremlins and The Evil Dead, it's a movie that strikes a fine balance between laughs and frights, yet there's the notion that if such an incident did occur, everybody would probably react in a similar manner to Frank and Freddy.

Characters are a strong point; Dan O'Bannon has a way of developing characters through small-talk and their interactions with the environment, as seen through the crew of the Nostromo in Alien.  This tradition continues as the sizeable cast is all fleshed out through their interactions with one another and what they do, which does provide the viewer with concern over whether they will live or not once the dead rise.  For instance, Frank and Freddy, despite gradually turning into zombies over the course of the picture, do come off as sympathetic yet also ignorant for their accidental behavior and not knowing about the dangers that lurked within, but their panicked screams of fear and agony over their illness also makes them a delight to watch.  Yet, out of all the characters, Burt Wilson stands out as the highlight since he takes responsibility for the incident and formulates most of the plans he thinks will help everyone, but they tend to make things worse. 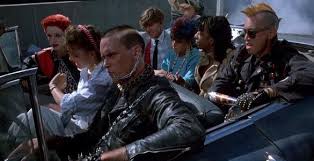 In addition to Ernie, the mortician that becomes befuddled yet fascinated by what's going on, but the people who make up Freddy's group are an interesting bunch.  When first viewing the film, one might wonder why these individuals, each of whom represents a different clique, are hanging out together in the first place, but it's clear from their introduction that they are united by one goal, which is they're desire to party.  From the nerdy Chuck (John Philbin) to the preppy Tina to the punk-rockers Trash (Linnea Quigley), Scuz (Brian Peck), and Suicide, they are each memorable for certain characteristics.  For example, Suicide is a large, burly man who is convinced that his leather-and-chains get-up is representative of his thuggish status, which he believes to be a lifestyle.  The previously mentioned Chuck is nothing more than a geek who handles the boom-box and tries his best to be cool, but more than often fails.  Of the gang, the only "normal" members, besides Chuck, would be Tina, Spider (Miguel Nunez Jr.), Casey (Jewel Shepard), and even Freddy, who are only there for the comradery, or in the case of Tina, her boyfriend.

As a zombie movie, Return of the Living Dead sets up new ideas that would become standard for the genre, while also flipping the notion on many of the established concepts.  They may shuffle, but these zombies tend to run and pounce on their targets to eat brains, which has since been recognized as the primary choice of meat the undead prefer.  These creatures are also intelligent, to a certain degree; while they never drive vehicles in the movie, they are capable of operating machinery and can talk, which they use to bait those who wander into the cemetery.  However, one major shake-up from what we perceive about zombies is how they are killed.  As mentioned before, destroying the head doesn't kill them, not even total dismemberment.  Even if burning does eliminate them, for a price, you immediately recognize that there's a strong probability none of the characters might survive the entire picture.

For all the right this movie does, it does fall prey to some of the dumb clichés horror films are known for.  Throughout the film, characters make plenty of bad moves; for example, after unleashing the gas in the warehouse, Frank and Freddy don't immediately call the number written on the barrel, thinking that bringing the army to the place might jeopardize Burt's business and reputation.  If they had done this early one, the two might have saved a lot of lives and prevented a small nuke from being dropped at the end of the film.  Also, the Louisville Police dispatch is quite easily duped by a moaning, undead voice asking for more paramedics and cops to show up at the graveyard.  What is probably the stupidest moment, though, is Tina's insistence that she stay in the chapel with Freddy even though him and Frank are clearly on the verge of total zombification, so it comes as no surprise to the viewer when he starts attacking Tina, trying to get her brain. 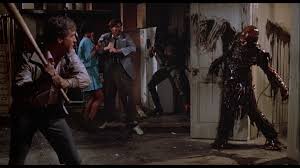 Despite being made on a small budget of four million dollars, the make-up and practical effects have aged relatively well, mostly.  At times, the limited amount of cash does show, namely with how most of the zombies are clearly regular people covered with pale face-paint or mud, but there are other effects that are quite the show-stoppers.  The best example is the corpse in the barrel, who is nothing more than a skeleton being held together by the melting, dripping flesh on his body, resulting in movement that makes him an unsettling sight to watch.  Then there's the soundtrack, which features songs that fit the punk-rock, B-movie tone of the picture.  Even if one doesn't like punk music, there's no denying that the tracks set the mood right, especially the song "Partytime" by 45 Grave, which is heard when the dead begin to rise in masse.

Stylish, scary, delightful; these are words that best summarize Return of the Living Dead.  Like the punk-rockers in the film, it's a picture that strays from the norms of the zombie genre to create an experience that is harrowing, but also fun.  It's not perfect, but for those that want to kick back and relax, alone or with others, and enjoy a riotous time, this is a good choice.