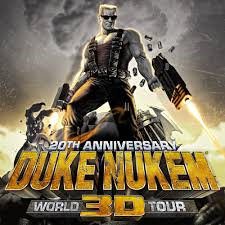 Each year sees the release of many titles across various platforms and genres, and when the awards ceremonies happen later, a select few will be commended for their quality.  Sometimes, their impact affects people so much that the product is still remembered many years later.  In the '90's, Wolfenstein 3D and Doom encapsulated players with the idea of killing enemies in a first-person perspective, but Duke Nukem 3D, released in 1996, showed us that such an act could be both entertaining and funny.  As will all critically-acclaimed works, the game has received its share of ports over the years, but in 2016, developer/publisher Gearbox Software took the chance to honor its legacy via re-release filled with nostalgic extras and technical enhancements.

Taking place immediately after Duke Nukem II, the titular protagonist is returning to Earth after defeating the threat of the last game when his ship is shot down over Los Angeles.  He discovers that the city has taken over by alien invaders, who have been terrorizing the populace and abducting women with the intent of using them as hosts for their kind.  Thus, Duke Nukem sets out with the intent of eradicating the extraterrestrial threat and saving the ladies.  Over the course of the game's five episodes, his journey takes him though L.A. and the surrounding area, outer-space, and the likes of London, France, and Russia in the closing act.

Simplistic in set-up yet brimming with personality, Duke Nukem 3D compensates for its basic plot by featuring a fun protagonist and a highly irreverent tone.  Like B.J. Blaskowitz and the Doom-guy before him, Duke represents the player's inner fantasy of being an ultimate badass, but it's his voice and actions that help him stand out from the former two.  Prior to his creation, most video-game characters were silent and had to rely on their in-game gestures and animations to create personality, and while Duke certainly performs several memorable actions, his voice and vast array of one-liners are what help stand out from his ilk. 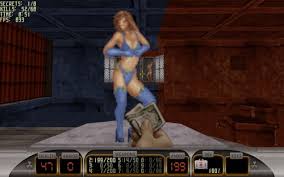 He has simple goals and knows how to tear into the opposition, but he's also very sarcastic and immature.  When he's not referencing different '80's and 90's action movies, Duke is flashing the cash so strippers bare their breasts or defecating down the throats of giant aliens.  At the time, such actions caught the eye of the press, which led to controversy, and though the game can be risqué, the humor never crosses the line and becomes tasteless or worse, unfunny.  Considering his lines are often quoted by many to this day, Duke Nukem 3D succeeds where other games at the time such as Leisure Suit Larry failed by never going overboard with the comedy and sexual references.

Duke Nukem 3D's gameplay is representative of a time when shooting was a matter of being able to efficiently run-and-gun, mowing down enemies left and right, all the while making your way to the end of a stage and finding as many secrets as possible along the way.  Over the course of the game's five acts, gamers will shoot their way through a multitude of stages with a common goal: kill the enemies and fulfill the required tasks needed to continue onwards, be it find color-coded keycards or solve puzzles.  Levels are complex in design, and though some can be difficult to navigate, the remainder are easy to get a grasp of and determine where you're supposed to go.  However, those stages which are confusing and become tedious to complete often stick out like a sore thumb, since the action slows down to a crawl as the player fumbles around, trying to figure out where he/she is supposed to go.

On the other hand, combat is smooth yet has strategy to it.  Although it lacks the same precision that a mouse-and-keyboard combination offers, the controller set-up on the PlayStation 4 works well, allowing Duke to move around swiftly with the kinetic action of a pinball.  Both the aliens and weapon selection are varied; the firearms include a pistol, a shotgun, a heavy machine gun, and a rocket launcher, but there is also more inventive fare like a shrink ray, a freeze ray, and a rapid-fire missile launcher known as the Devastator.  Though each gun is useful, most bad-guys have a weakness against certain guns.  For example, flying octa-brains and pig-cops are more susceptible to the shotgun, but heavier foes and bosses will require the RPG or the rapid-fire Devastator to bring down.  Make no mistake, Duke Nukem 3D can be a challenging game, but by exploring your surroundings and uncovering secrets, this increases the chances of finding more ammunition for the bigger guns and useable power-ups to help Duke have an advantage over the opposition. 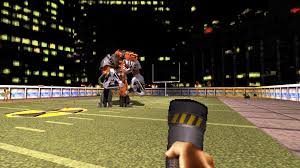 As stated earlier, this port celebrates the 20th anniversary of this heralded game via a few interesting bonuses.  There is, of course, a slight graphical enhancement to the visuals, as well as re-recorded voice work from Duke's voice actor, Jon St. John, more on that later.  Yet, the most interesting additions are the fifth chapter, titled "Alien World Order," and an option that enables audio commentary from those involved with the game, including Richard Gray, Alan Blum, and Randy Pitchford, who was a level designer on Duke Nukem 3D before he founded Gearbox Software.  The commentary is interesting, since it provides much insight into the development of this game, but the new act is slightly underwhelming.  Although it offers more fun combat, the chapter never takes full advantage of its set-up, as it rehashes enemy designs and bosses from the original game, without changing their look to match the respective locale.

Duke Nukem 3D's visual style has helped the game hold up reasonably well, graphically speaking.  It's never true 3D, rather, it's a hybrid of sprite-based objects and characters that are located on basic three-dimensional geometry, giving the illusion that it is truly 3D, although the end-game CG cinematics look very dated.  The audio is solid; guns sound meaty and the soundtrack, with its mixture of ambience and hard-rock compositions, fits the desired mood of each locale, but the standout is Duke Nukem.  Jon St. John does a brilliant job at bringing the character to life through his deep, growly voice and multitude of one-liners.  Of course, this is what the original dialogue is like, and though the remastered lines are well-done, they lack that same punch the old lines have, probably because of time having caught up to Jon St. John. 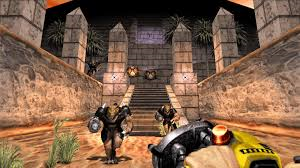 Even twenty years after its release, Duke Nukem 3D has aged, for the most part, relatively well.  Shooting is great and the levels, even when their confusing nature drags things out, are a treat to explore and find that which is hidden.  The extras are nice, but for returning players, it might be a hard sell since there is only one new chapter and the original add-ons, save for the Atomic expansion pack, are not included, but for others, this is a good way to get familiar with one of gaming's most manly heroes.