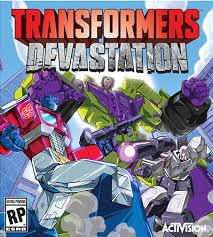 When a licensed property receives a video game adaptation, one of two things can happen, either the publisher can establish a series based off of said intellectual product, or they can produce another game, unrelated to the title prior.  In many cases, companies will go with the latter, especially if the franchise is receiving a new film or any other form of major announcement.  Often, this allows the publisher to let another developer take a stab at the work, and try something else that the prior company didn't attempt.  Released in 2015, Transformers: Devastation is not connected to the Transformers: Cybertron games created by High Moon Studios.  Instead, developer Platinum Games has opted for creating a fast-paced brawler that mirrors the iconic '80's cartoon which many grew up on.

In an unnamed metropolis, the heroic Autobots find themselves confronting the sinister Decepticons once again.  The forces of evil are controlling giant metallic claws and the Insecticon species in an attempt to discover a crashed ship know as the ProudStar.  The ship was piloted by Nova Prime, and it is capable of terraforming planets into ones habitable for the people of Cybertron, the Transformers' home planet.  Thus, Megatron, leader of the Decepticons, wants to find the ship and harness its power so that the Insecticons can turn Earth into a place reminiscent of their now war-torn home.  With no other choice, Optimus Prime and the Autobots set out to stop Megatron's plan for global conquest.

One of Devastation's biggest strengths is the writing and direction, which help keep the structure and feel of the game and narrative in lieu with the original cartoon, despite the overall quality of the storyline being serviceable at best.  It's a simple plot about good vs. evil and a race against time to prevent the destruction of Earth.  Fans will appreciate the plentiful nods to the franchise and the dialogue that highlights the distinguishable character archetypes each robot has, such as Starscream's bickering regarding how he would be a better leader of the Decepticons than Megatron.  Yet, if you don't know about the history of the Transformers, or any of the other terminology referenced elsewhere, it won't matter much in the grand scheme of things.  Fortunately, the strong performances of the cast keep things from being a total bore, and nothing stirs the heart up more than hearing voice actor Peter Cullen, the long-time actor for Optimus Prime, say, "Autobots!  Transform and roll out!" 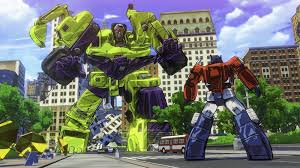 Instead of being a third-person shooter like prior Transformers games, this newest take on the property is an intense beat-em-up reminiscent of developer Platinum Games' other works.  The Autobots may move and fight with the same fluidity and speed as Bayonetta or Raiden, but controlling a twenty-five-foot-tall robot has its differences.  There are five character to choose from, including Optimus Prime, Bumblebee, Sideswipe, Wheeljack, and Grimlock.  Every Autobot is capable of holding up to four weapons, either melee or ranged, and can transform in and out of their vehicle form at any time with the press of a button.  Your Autobot of choice will be pitted up against the Decepticons in fights that require a keen eye.

Combat is frenetic and a joy to partake in thanks to fine-tuned controls and a slew of techniques to utilize.  For example, dodging at the right moment slows down time for a few seconds, allowing you to land in some hits; meanwhile, chaining together attacks can activate a special vehicular move that allows further damage against the opposition.  Doing this and moving quickly will net the player a high performance grade at the end of the encounter, as well as credits, weapons, and other items of interest.  The selection of foes to confront includes a varied assortment of melee and ranged bad guys, but the boss fights are another story, as they require smart fighting in order to bring them down. 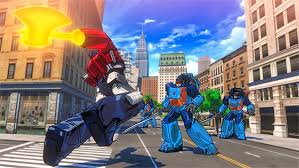 On the subject of weapons, acquiring new ones can be done by other means besides fighting enemies.  You can purchase them with credits, open loot chests strewn about each level, or you can complete side-quests.  Every item varies in quality and performance, and to get the most out of the best ones, you can combine gear at the Ark, the Autobots' headquarters.  Alternatively, less powerful weaponry can be sold for money, which is also used to buy recovery items and create special tokens that can buff your character or equipment.

While Transformers: Devastation is strong in its combat, other elements don't gel as well.  The six to eight-hour campaign takes place across a handful of locations, primarily the city, the ProudStar, and a small island located outside of town; as a result, the amount of backtracking that comes with revisiting these areas becomes tedious, even if new items are added in each location for you to find.  The biggest issue with Devastation, though, is that it lacks in replay value; while the fighting is thrilling and challenging, there's not much of an incentive to revisit the story once things have wrapped up, aside from pursuing a better rank and finding the hidden items you may missed.  A challenge mode is available to test your skills, but it isn't enough to warrant another play-through.

On the other hand, the title boasts top-notch production values in both the visuals and audio.  The colorful art style is lifted straight from the '80's cartoon, and it brings the onscreen spectacle to life with eclectic results.  Voice acting is equally good; as alluded to earlier, a majority of the Transformers are voiced by their original actors; besides Peter Cullen reprising his role as Optimus Prime, Frank Welker also returns to play the villainous Megatron, in addition to those two, the game features the likes of Dan Gilvezan, Michael Bell, and Gregg Berger, who play Bumblebee, Sideswipe, and Grimlock respectively.  The solid voice acting, though, pales in comparison to the soundtrack, which puts an emphasis on shredding guitar riffs that fit in perfectly with the over-the-top pacing of the game. 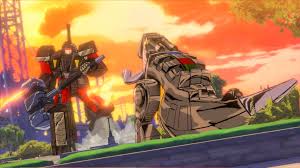 Much like Transformers: Fall of Cybertron, Transformers: Devastation is both a love letter to the franchise and a fun game in its own right.  Under the direction of Platinum Games, the developer has created a product that, for the most part, fits in with the excellent quality of most of their prior works.  Though lacking in depth and an interesting narrative, it makes up for its shortcomings by offering plenty of thrilling action that will appeal to everyone.