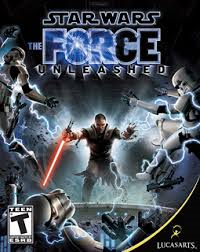 For the past four decades, the Star Wars franchise has evolved and grown from its debut in 1977 to become a giant, pop-culture conglomerate that encapsulates virtually every corner of merchandising that exists.  It's a franchise that appeals to both young and old, with their stories offering amazing action, interesting worlds, and narratives that are easy to follow but offer much when further analyzed.  The universe of Star Wars has grown tremendously through the likes of comic books, novels, television shows, and of course, video games.  The stories they told offer varying takes on the fictional galaxy, and with Star Wars: The Force Unleashed, gamers could experience the true power of the force through the perspective of an individual that was one with the dark side.

Set in between Revenge of the Sith and A New Hope, the game follows a sith-in-training known as Starkiller.  As a child, his father was killed by Darth Vader, who tracked him down to the planet of Kashykk as part of Vader's plan to find and eliminate the surviving Jedi.  Grown up, Vader has trained Starkiller in the ways of the dark side so he can finish what the sith lord started, while receiving assistance from Juno, a pilot, and his droid, Proxy.  Before long, though, the Emperor learns of Darth Vader's apprentice, and in retaliation for this, he orders Vader to kill Starkiller and have his partners arrested and sentenced to death.  After being rescued from the brink of death, he learns that Vader wants him to go and form an alliance of rebels, with the intent of overthrowing the Emperor and his empire; thus, once he has saved his friends, Starkiller sets out on this quest. 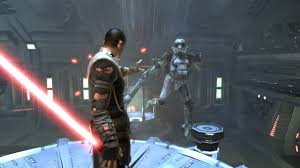 With its well-written characters and a story that successfully integrates itself into the canon of the films, The Force Unleashed excels in the writing department.  It stands on its own as a tale that can be enjoyed by those unfamiliar with the mythology of the series, but people who are aware of the lore will greatly appreciate it even further, especially with how it connects to the original trilogy.  The cast is solid; Starkiller is a compelling protagonist whose actions paint him out to be only a bad guy at first, but as the narrative progresses, he gradually shifts away from the path of evil and into the realm of good.  He was involuntarily taken from his family at a young age, and at the end of the game, he redeems himself for the benefit of everyone else.  Other characters are equally strong, especially the droid Proxy, whose sarcastic but deadly personality leads to many humorous moments throughout the campaign.

Take God of War and replace Kratos with a man capable of pulling Star Destroyers out of the sky, and you have the basic set-up of the gameplay for The Force Unleashed.  While it follows the template of a hack-and-slash to a fault, the usage of force abilities and more help keep the game fun but also unique.  Initially, Starkiller only starts out with his lightsaber and a few powers including force grip and force push, but as the levels continue, new moves become available for use.  Before long, he can shoot lightning from his hands, impale an enemy with his lightsaber, or unleash a shockwave capable of blowing away the opposition.  These powers and others can be pulled off with ease thanks to solid controls, yet targeting foes and objects can be finicky due to the targeting system sometimes focusing on the wrong item, but such moments are few and far between. 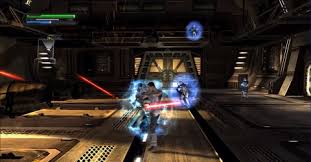 Despite the multitude of abilities available, the game is never a cakewalk thanks to the varied selection of enemies to face.  There are the Stormtroopers, whose poor aim and fragile nature make them prime cannon-fodder, but additional trooper variants offer their own tactics.  Jet-pack troopers will try to snipe you from afar; meanwhile, some are equipped with a special shield that protects them from Starkiller's force attacks, meaning he must get up close with his lightsaber to deal damage.  Unfortunately, the bosses lack that same amount of difficulty, and can be taken out with ease by using a mixture of hit-and-run attacks and aggressive behavior.

Besides combat, there is some light-puzzle solving and platforming during certain sections of the stages.  However, the latter can be annoying as Starkiller's movement is stiff, meaning one can easily fall off the level if they are not careful.  Speaking of which, the environments are varied and rely on a mixture of both familiar and new locations from the Star Wars galaxy, including Kashykk, Raxus Prime, and Cloud City.  Areas do get repeated, especially in the second half of the game, but a nice touch is that each locale has their own unique enemy types, in addition to the empire's forces.  For example, on Raxus Prime, the player will fight junk scavengers and droids brought to life from the scraps of the planet by a mysterious presence, and on the planet Felucia, you'll have to contend with the natives and wildlife that inhabit the place.

Defeating bad-guys with your powers and completing secondary objectives earns the gamer points, and when enough are earned, a talent point is earned.  These can be put to one of three categories that focus on increasing Starkiller's durability and effectiveness in combat, as well as increasing damage for his force moves or unlocking new combos for him to unleash during fights.  Additionally, there are holocrons hidden in every level that offer different rewards including talent points, costumes, or lightsaber crystals.  Some change the color of Starkiller's lightsaber but others can offer a bonus in damage for one of the force powers or the lightsaber. 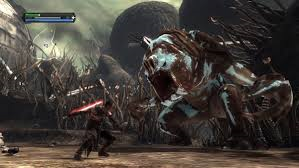 Visually, the game does a solid job at bringing the world of Star Wars to life through its well-designed environments, characters, and cut-scenes that are superbly directed.  Yet, there is a noticeable lack of polish in the title, primarily in the game's physics engine, Euphoria.  While it is great at enhancing the spectacle of seeing a force push decimate a wall or sending a squadron of troops flying; at times, the amount of chaos can create some unintended, if not hilarious consequences.  There were multiple times in which enemies would randomly trip and fall, or an object would get stuck on something and start to freak out.  Luckily, the audio does no contain such problems, as the voice-acting is great and the soundtrack is just as good with a great mixture of classic orchestral motifs from the films and new ones that were composed for the game.

Though not without its faults, Star Wars: The Force Unleashed does offer players a fresh take on Star Wars, while still being familiar to the franchise.  The story and production values are top-notch and help make the product on par with the films we know and love.  Meanwhile, the gameplay merges the hack-and-slash template with lightsaber combat and force abilities to create an experience that is quite chaotic, despite some design problems.