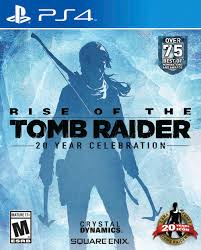 In the entertainment industry, sequels act as the backbone for several different mediums, including film, literature, and video games.  While original ideas are necessary to sustain the creative juices of creators, developers, and studios, sequels are equally important.  If a follow-up is created, then it shows that the original product was a success and people want to see more from the property.  As discussed in prior reviews, sequels can go one of two ways, either they offer more of the same but improve upon the concept of the first, or it can try something new altogether.  Although the former is derided by many as the publisher or creator playing it safe, this doesn't mean that the title can still be a solid entry, such is the case with Rise of the Tomb Raider.

After the events of the last game, Lara Croft has become a professional archaeologist, with the intent of following in her father's foot-steps and discovering the unknown treasures of society.  Yet, the process hasn't been easy, as she has had to conduct her research in secrecy ever since what happened on Yamatai went public.  Croft is focusing on an item her father became obsessed over, an object known as the Divine Source, which can grant the wielder immortality and control over the people of the Earth.  She's not the only one who has her sights on the artifact, as during her investigations, Croft discovers that a group named Trinity is also hunting for the Divine Source too.  The leader, Konstantin, believes that by using the object, he can cleanse the planet and start anew with his organization.  After being separated from her research expedition while exploring Siberia, Croft encounters an isolated tribe who follows the Divine Source and its owner, a mysterious man named Jacob.

Despite the name, the story is less about Lara Croft's rise as an individual and is instead focused more on redemption. Croft is searching for the Divine Source not just for the sake of discovering the uncharted, but to also redeem her family's legacy after Lara's father became devoted to something she and others thought was bogus.  However, the structure and moments from the narrative are eerily like Tomb Raider.  It starts with Croft in the middle of her expedition when she gets separated from the others and must survive on her own until she is reunited with the others later.  She also meets a man who becomes her source of determination; in this case, Jacob, and a supernatural element is weaved into the tale and is quite prominent in the finale. 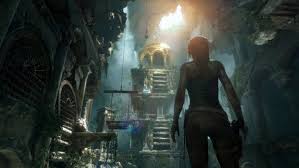 Though this does come off as retreading old ground, it doesn't feel entirely copy-and-paste thanks to sharp-writing and solid characters, for the most part.  Jacob is a compelling protagonist, and who he is makes for an interesting plot point as things progress, but the villain leaves much to be desired.  Konstantin and his motivations are a rehash of Matthias from the last game, and aside from being the antagonist, there's not much else that makes him interesting, aside from a moment towards the climax in which he hints to Lara Croft that Trinity has bigger plans in store, ones which will be revealed when the next installment is announced.

Rise of the Tomb Raider's gameplay is largely unchanged from before, but the refinements and tweaks made keep it just as entertaining as the original.  The level design maintains an excellent balance between open and linear environments, with the sandbox areas providing plenty of opportunities to discover rewards and materials that will help Croft in the long run.  A stronger emphasis has been put on gathering resources such as branches, leaves, animal skins, and other materials, which can be used to create new gear, weapon attachments, or support items, and you can also craft improvised distraction and explosive devices on the fly to distract or harm enemies.  Additionally, certain locations also feature side quests for Croft to partake in, which can reward her with special equipment once the task has been completed.

On that note, most of the equipment and firearms that can be obtained are recycled from Tomb Raider, but some have received adjustments in design, especially the guns.  Every weapon now has an alternate ammo type; for example, the shotgun can fire incendiary rounds in addition to normal shells, and the bow and arrow now sports poison arrow types in addition to the flaming, explosive, and normal ones.  As for gear, the ice picks make their return and are joined by a grappling hook which is used to reach far-off ledges and to latch onto boards that allow you to swing across gaps.  Your tools, while smartly implemented in puzzle-solving, make combat rather easy, which is made more irritating by the fact that all enemy types from the first game are re-purposed here, meaning the tactics one used in the reboot can be applied here as well. 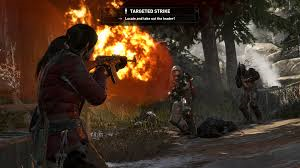 Although fighting is easier, the platforming and puzzle-solving are more complex and satisfying than before.  The puzzles require more thought to figure out, and the tombs, one of the weaker aspects from Tomb Raider, have been greatly improved and are rewarding to complete in all of the right ways.  Discovering locations, killing enemies and wildlife, completing objectives, and solving tombs earns Lara Croft experience, which in turn, earns her a skill-point.  Additionally, her role as an archaeologist is greatly emphasized in various ways, one of which is through her ability to decipher foreign languages.  Reading wall murals and manuscripts betters Croft's linguistic skills that are used to figure out pillars that can pinpoint where hidden treasures are in the stage.

Rise of the Tomb Raider, in addition to featuring a well-designed campaign, also comes with a wealth of bonus content.  For the uninitiated, the game was originally an exclusive for the Xbox One and PC for a brief period when it released in 2015; a year later, developer Crystal Dynamics brought the title to the PlayStation 4, and with it, a host of new options.  Among the bonuses are all alternate costumes, weapons, and side stories, plus the game was packaged in a special case designed to resemble a pocket journal.  The extra side missions focus on Lara's endeavors with the myths of Siberia, and include an encounter with the fabled Baba Yaga Witch, a trip to an abandoned research station that houses a deadly chemical, and a scenario set in the Croft Manor.  The final is rather interesting as it allows players to utilize the PlayStation VR system to explore the surroundings. 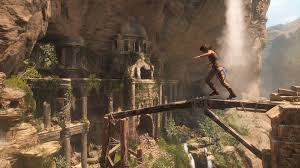 Speaking of environments, the game is technically solid across the board, with smooth animations and a great art style that brings the title to life, and the switch from the Xbox 360 to the PlayStation 4 has allowed Crystal Dynamics to increase the size and scope of the levels, resulting in environments that are, at times, breathtaking to look at.  Voice acting reflects the quality of the visuals by featuring top-notch performances from the entire cast, and the soundtrack shifts nicely between dramatic and intense and calm yet grand when needed.

Rise of the Tomb Raider is just as compelling as 2013's Tomb Raider.  Though it lacks the surprise of that game and retreads many elements of that title, both from a narrative and gameplay standpoint, this is still a well-done follow-up that polishes up and expands upon the core mechanics of the original, offering players a fun, action-adventure romp that's good enough to give Uncharted a run for its money.  In short, this is an expedition that is worth your time.