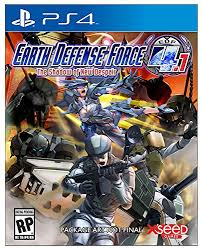 With every new console era, publishers will take their titles, both old and recent, and give them new life on the latest systems.  This concept has been most prevalent in the seventh and eighth generation of consoles; often, the enhancements a game is given are minimal at best, as most of them receive a boost in performance in order to match the hardware specs of the console it's being ported to.  At first glance, Earth Defense Force 4.1: The Shadow of New Despair is a simple re-release of 2014's Earth Defense Force 2025, but underneath the hood are a slew of additions and tweaks that make what is arguably the best installment in the series a smoother playing experience.

Eight years have passed since the fearful invasion of the Ravagers in 2017; in that time, humanity has recovered and used its experience from the attack to better strengthen the firepower and strength of the Earth Defense Force.  With new weapons and infantry divisions, the alliance is better capable of holding off the alien forces, should they ever return.  Then, in 2025, what is just a minor incident with giant ants slowly unravels into a full-scale clash as the Ravagers have come back, and like the Earth Defense Force, they have learned from their encounter with mankind and are armed with new creatures and machinery.  With no other choice, the Earth Defense Force leaps into action to ensure that Earth does not succumb to the extraterrestrial menace.

In spite of the elaborate summarization, Earth Defense Force 4.1's plot is simplistic in set-up and structure, and more the better because of it.  While serious in nature, the over-the-top nature of the situation and dialogue heard throughout each missions reminds us that a game where hordes of creatures are killed with a bombastic arsenal of guns and different characters should not be taken seriously.  It's campy, but not to the point that it's self-aware, and like Earth Defense Force 2017, the radio conversations give players an insight into the events unfolding elsewhere across the globe and to also delve into certain moments and characters from the 2007 game, particularly Storm One and what happened to him after the war. 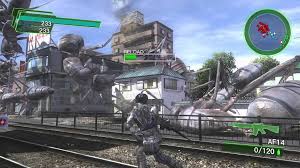 With the jump to the PlayStation 4, Earth Defense Force 4.1 brings with it a host of various improvements and additions to the core experience, many of these details are miniscule, but make a big difference in the grand scheme of things.  The four classes, the Ranger, the Wing Diver, the Air Raider, and the Fencer, are easier to control thanks to the instruction manual that comes with the game.  With it, understanding the nuances of each character is much easier since you no longer have to figure things out on your own, or rely on the information provided in the loading screens.  Additionally, recovering from attacks is streamlined and quicker to do as tapping the roll button at the right time allows your character to get right back up.

All eighty-five missions from Earth Defense Force 2025 are in this game, yet many have received a change in location and an increase in the number of enemies and allies present in each one.  However, four new stages have been added that focus on the Earth Defense Force's endeavors to stop a new monster known as Erginus, a giant, Godzilla-esque dinosaur that can leap massive distances and shoot lightning from its mouth.  The Earth Defense Force decides to use the Vegalta mech, whose movement is incredibly slow, but it is capable of throwing punches and other techniques to deliver massive pain on the opposition.  The fight against Erginus culminates in all-out battle where squads of the Vegaltas go up against herds of the beasts in a clash that would make Guillermo del Toro proud.

Outside of these adjustments and others, including the ability to recover lost health for your teammates by picking up recovery items and order commands to your squad, this title still offers the best action in the series to date.  The selection of foes includes returning bad guys such as the giant ants, spiders, Hector robots, gunships, and dropships, but they are joined with a host of new enemies including giant bees, dragons, and new variations of the gunships and robots, and the huge roster will certainly keep gamers on their toes.  The campaign is long, taking around twelve to fourteen hours to beat, and though the non-stop shooting can get tiresome, which is something the series has long struggled with, powering up the four characters and unlocking new weapons derides the monotony. 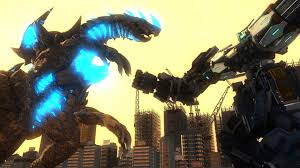 Visually, the jump from the Xbox 360 to the PlayStation 4 not only allowed the developers to put more enemies onscreen, but it also helps iron out the technical issues prevalent in Earth Defense Force 4.1's original release.  Load times aren't lengthy and instead are short and quick, and framerate drops, which have been an issue in prior entries, are minimal to non-existent here.  Voice acting retains the cheesy nature of the dialogue from past games, with plenty of funny lines to be heard throughout, and the music's intense, action-packed compositions help enhance the onscreen chaos.

When you look past the added bells and whistles, Earth Defense Force 4.1: The Shadow of New Despair retains the position of being the pinnacle entry in the series.  While the new content isn't enough to entice those who already have Earth Defense Force 2025, the improvements and changes made to the gameplay and visuals will.  It's an experience that offers plenty of entertainment for both veteran players and newcomers.