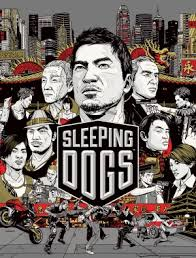 Every year, hundreds upon hundreds of titles across the entertainment industry are announced and subsequently go into production.  While many of them see release, there are a few that are cancelled for varying reasons, whether it's because the project dealt with financial issues or a lack of interest, its cancellation elicits disappointment from both the creators and the general public.  Yet, some manage to get saved by a company and receive new life, such is the case with Sleeping Dogs.  Initially a revival of the True Crime series, the game was cancelled by its original publisher Activision not too long after being announced; a few months later, Square Enix came in and revived the project and changed its name, releasing the title in 2012.

Sleeping Dogs follows Wei Shen, a San Francisco police officer who has returned to his hometown of Hong Kong on assignment from Interpol.  Unbeknownst to the police working there, Shen has gone undercover in order to infiltrate and dismantle a local division of the Triads known as the Sun On Yee.  He teams up with his old friend, Jackie Ma, and through a series of events, the two end up becoming high-ranking members for the Sun On Yee.  Unfortunately, Shen's involvement with the gang starts to put a strain on his mission for Interpol, with the leader of the operation, Thomas Pendrew, questioning Shen's loyalty to the organization and his role as a police officer.  As tensions rise in both the Triads and Interpol, Shen begins to question if his involvement with the criminal underworld is threatening to put him back on the road to crime which he tried to flee many years ago. 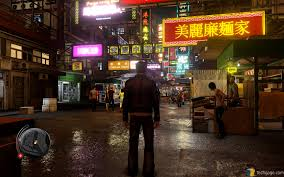 Though it doesn't break new ground, Sleeping Dogs' narrative offers a compelling tale featuring an equally memorable protagonist.  Wei Shen's rise through the Triad ranks and personal conflicts with those he trusts are the driving forces of the story; in fact, the plot is very reminiscent of last year's Mafia III, but whereas Lincoln Clay's character arc was rooted in the seeds of revenge, Shen is merely doing his job, but how far he goes in the assignment jeopardizes his mission.  The other highlight is the setting; though many games have utilized the Far East as their main location, Sleeping Dogs is one of the few to offer an in-depth recreation of its nation and culture.  Developer United Front Games did a great job at making Hong Kong feel like a living, breathing city, and a place filled with many interesting sights and sounds.

Whereas the game takes many risks in the story department, the gameplay is rather safe, offering a fun but familiar open-world experience none too different from the likes of Grand Theft Auto and Saints Row.  Over the course of the game, Shen will complete a multitude of missions for both the good and bad guys, all the while exploring Hong Kong.  A majority of the activities available to do are standard fare, such as participating in street races, dismantling gang operations, helping people of interest, or finding collectibles that reward you with different upgrades and other rewards.  These are fine, but the best ones are the karaoke and cock-fighting mini-games, which fit in with the Far East setting.  Additionally, Shen will meet up with multiple women over the course of the game, and each one is capable of being dated with, which unlocks additional rewards if one pursues this option. 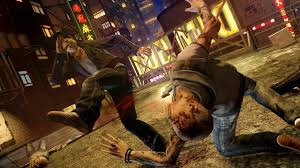 Whereas most sandbox games put an emphasis on shooting over punching, Sleeping Dogs flips the equation around, offering robust hand-to-hand combat and downplaying shoot-outs for most of the game.  The combat is very good, featuring a variety of techniques and finishers for Shen to use on the criminals of Hong Kong.  Besides using his fists, he can also use the environment to his advantage in different means, such as grabbing cleavers or knives off of the ground to attack with, or by grabbing his foes and shoving them into a nearby item of interest, which results in him pulling off a brutal finisher reminiscent of the takedowns from Madworld.  While the fighting is solid, the gunplay is rather weak and simplistic, but not without its moments.  If you find yourself in a high-speed chase when trying to eliminate pursuers or a target, you can pop out of the car and shoot an opponent's tires out, causing the vehicle to flip over and crash in satisfying slow-motion.  Unfortunately, the only way to obtain firearms is from fallen enemies, as there is no weapons shop.

Shooting is not the only area where the game falters, as the morality system offered doesn't feel as if it's been implemented to its best potential.  During story missions, there are two meters that also double for XP, one for the police, and the other for the Triad.  The police rank can degrade if you cause property damage or hurt civilians, but the Triad ranking increases when enemies are dispatched, and having a large amount of both meters is necessary in order to obtain experience needed to receive points to spend on upgrades.  The problem is that this doesn't extend to what the player does outside of the story; it's possible for one to go on a rampage, terrorizing the populace, and though the police will come for you, there are no other repercussions, which is a shame, as the system could have been used to decide how people view Shen during the storyline, either treating him with respect or criticizing him. 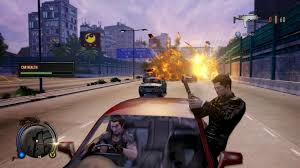 Visually, Sleeping Dogs looks solid, with well-detailed environments that bring the city to life, and characters whose activities further enhance the mood of Hong Kong.  The audio is quite unique; although the voice-acting is top-notch, featuring many well-known celebrities in both major and minor roles, an interesting touch is that Asian characters mainly speak in the Chinese language, shifting back to English when necessary.  This East-Meets-West mentality carries over into the soundtrack, as the radio stations offer a slew of Asian and English takes on multiple genres including hip-hop, pop, and rock.

Sleeping Dogs doesn't shake things up significantly for the open world genre, and while the experience is an overly familiar one, what redeems this title is its sense of uniqueness.  Its usage of locale brings the player to a place many have yet to travel to, and the gameplay differentiates itself from other titles in the genre by putting a large emphasis on melee combat, making the game feel more in line with a brawler than a shooting gallery.  Though not without its faults, Sleeping Dogs is a fine time.

Posted by William Lowery at 1:38 PM