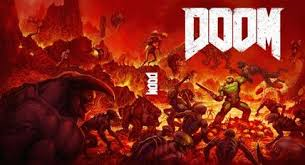 2016 is a year that will be remembered by many as one filled with loss, tragedy, and surprise, with events such as the departures of many well-known people and the presidential election causing many to conclude that this was one of the weakest years in the 21st century to date.  On the flip side, the gaming industry enjoyed a successful year, showing that not everything was as dismal as it seemed.  Among that many games that were released, one that stood out was Doom.  For twelve years, the series has been shrouded in silence since 2004's Doom 3.  When Doom released in the summer of last year, the title showed the general public a side of first-person shooting action that hadn't been seen since the '90's, one that makes for a rollercoaster ride of an experience.

Taking place in the future, this semi-reboot follows an unnamed character only referred to as the Doom Slayer.  When the story begins, he wakes up to notice that he is bound to an ancient slab and is about to be encapsulated in a tomb before he manages to escape his confines, find his armor, and figure out what's going on.  As he learns, the U.A.C. Corporation has accidentally unleashed Hell on Mars in an attempt to try and harvest an energy source known as Argent which could save Earth.  Through the guidance of Samuel Hayden, a former human-turned-android responsible for the research of Argent, the Doom Slayer takes on evil by going through Hell and back in an attempt to stop the infestation from spreading elsewhere. 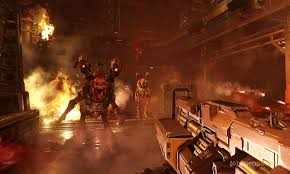 Story is light in Doom, but it works to the benefit of this game by allowing it to keep the focus on the intense action, and when the time calls for it, to progress the plot.  The set-up and motivations of Samuel Hayden and the villain, Olivia Pierce, rely on familiar narrative devices, but the lore that can be discovered via data logs fleshes out the game's world in a way that interests the player.  The files detail the struggles of a corporation coming to grips on what they have found, but also believing it can be used for a good cause.  The lore also explores a mythological being whose sole duty is to take care of evil, that person being the Doom Slayer.  While he doesn't utter a word, his actions throughout the campaign allude to the player that he is well aware of what is happening, and he intends to not only prevent evil from spreading, but he does not want the U.A.C.  to try and find a way to continue their studies of the malicious force the Doom Slayer is destined to destroy.

Doom's gameplay takes a back-to-basics approach in its structure and mechanics.  The game is old-school to a fault, there is no regenerating health, and players must instead find health and armor in order to ensure the Doom Slayer's survival, and taking cover when attacking is never an option, as it leads to death.  Its style is very reminiscent of Wolfenstein: The New Order, yet whereas The New Order had a strong balance of old and modern-day shooter mechanics, Doom is more reliant on the conventions of yesteryear, and elements of modern shooters are sparingly used.  It's also a game that never lets up on the action; from beginning to end, you will face hordes of grotesque monsters looking to tear you apart, and the only option left is to fight back.

Doom features an eclectic selection of weapons, including a pistol, a shotgun, a super-shotgun, an assault rifle, a mini-gun, a rapid-fire plasma rifle, a sharp-shooting plasma cannon, a rocket launcher, a chainsaw, and most important of all, the BFG 9000.  However, the likes of the chainsaw and the BFG have limited ammo, so you can't use them freely, and every other weapon, except for the pistol, shares ammunition with their respective gun type, so smart-decision making in firearm selection is a must, especially as the campaign progresses. 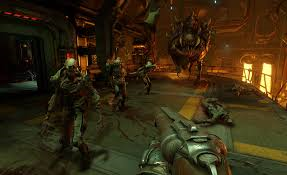 Then, there are the glory kills; whenever an enemy is damaged enough, they will go into a dizzy stance; in this state, you can perform a finisher on them that varies depending on which area of the body you are currently looking at.  These are not only fun to pull off, but are capable of rewarding the player with health, armor, or ammo, which can mean the difference between life and death in the heat of battle.  Fortunately, smart level design allows for players to easily maneuver around their surroundings in order to fight bad guys, and the pacing of each stage balances out time spent fighting demons and exploring your surroundings.  There are a multitude of secrets to find, many of which reward the player with an upgrade token for either their weapons or the Doom Slayer himself, and additional perks can be unlocked and equipped for usage by completing in-game challenge rooms hidden in each level.

Besides featuring a wide variety of guns to use, the game also has you facing off against an equally diverse selection of enemies.  It starts off simple as you encounter basic foes such as the zombie-like Possessed, wall-crawling demonic imps, and Hell troops, but before long, the game will pit you up against the likes of the flying Cacodemons, demonic Wreavers, and brutal Hell Knights.  As stated prior, it's a fast paced experience that never lets up, yet the game does lose steam towards the climax of the campaign, as all major enemy types have been introduced by then, and the player knows their weaknesses and which weapon is best reserved for use against each monster.  At this point, however, boss fights begin to crop up and are a welcome change of pace, with the likes of the Cyber-Demon and the Spider Mastermind providing tough but fun encounters. 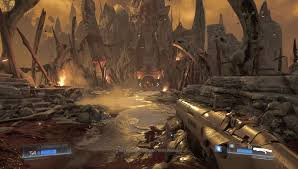 Graphically, this product is top-notch in every technical regard.  The framerate is silky-smooth, and the gunfire and glory-kill animations are a sight to behold, yet the real highlight is the art style.  Mars and the U.A.C.'s industrial facilities call to mind L.V. 426 from Aliens, with many of the clean and futuristic complexes having been consumed by the presence of evil, whereas Hell looks like it was ripped straight from the cover of a heavy-metal album.  Meanwhile, the voice acting, though sparingly used, is well-done, and the soundtrack reflects the intense nature of the game by offering a pulse pounding mixture of hard-rock guitar and rhythmic techno.

Doom is a game that not only revitalizes an old franchise, but also offers a refreshing experience from what is normally expected in the first-person shooter genre.  The gameplay may be old school in design, but its handled in a way that keeps the player thoroughly entertained, which is helped in part by its well-polished combat and level design.  For those that have yet to experience its brilliance, this is a must-buy.

Posted by William Lowery at 8:20 AM