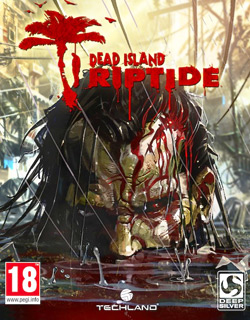 Sequels, by nature, are designed to not only continue where the story of the first entry left off, but to also correct any problems that were prevalent in the first and introduce new ideas which can make the experience refreshing or raise the stakes.  In the video game industry, whenever a title comes out that is immensely popular, publishers will find a way to capitalize off of its success, whether it means turning the game into a franchise or creating a follow-up that comes out not too long after the first, such is the case with Dead Island Riptide.  The first game was a surprise hit and it help put publisher Deep Silver on the map, but less than two years after the release of the first entry, a new one came out that continued the story of a rapper, a washed-out football player, a security guard, and a creepy Aussie trying to escape an undead nightmare.

Picking up immediately after the events of Dead Island, Riptide begins with the protagonists getting captured by the government after landing on a nearby ship in a helicopter they acquired.  A man named Frank Serpo wants to conduct experiments on them with the intent on figuring out why they are immune to the infection that consumed the island of Banoi.  While in captivity, the group encounters John Morgan, a marine who is also immune to the disease; before long, the ship capsizes during the middle of a storm, allowing the infected to get onboard and attack the soldiers and crew-men stationed on there.  After escaping captivity and the boat, the group ends up on an island called Palanai, and they learn that not only is the place infected, but the government plans on nuking the area, so the group, along with the survivors they meet, decide to head to the city of Moresby in order to find a way to get off the island.

Keeping in tune with the first game, Riptide's plot is a cliché-heavy narrative lacking in memorable moments or compelling characters.  Though it makes an attempt to flesh out the world and hint at something bigger to come, it isn't enough to save the narrative, and adding salt to the wound, the game ends on an abrupt cliffhanger that leaves the fate of the heroes on an ambiguous note.  Also, the serious nature of events clashes with the fun and riotous gameplay in a way that does not gel, and it makes one wonder if developer Techland is unsure if they want the game to be gritty or zany. 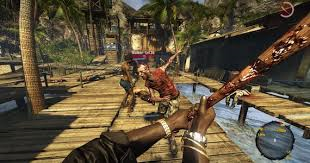 Much like the previous entry, this is a first-person shooter/RPG hybrid that's Dead Rising Meets Borderlands.  In fact, the game is less of a true sequel and instead a gigantic expansion pack, which is both good and bad.  Over the course of this experience, players will complete a multitude of story-related and side quests across Palanai and Moresby.  Along the way, hundreds of zombies will be killed with an eclectic selection of melee weapons and firearms.  Combat is primarily based around the usage of melee weapons, with guns not being prominent until one reaches the city.  At first, attacking zombies using items such as baseball bats, knives, and sledgehammers is tricky given the first-person perspective, but you get adept at it rather quickly.

All items are rated on a rarity scale, with white representing common and orange being highly rare, while green, blue, and purple encompass the rest of the scale.  Each melee weapon has a durability meter that degrades as the weapon takes damage; fortunately, work benches scattered around allow you to repair them, and the benches also allow the player to increase the item's durability or create special modified weapons capable of annihilating the undead.  Additionally, gunplay is much improved here, as firearms are capable of doing more damage to the zombies than they could in the first, and ammunition can be found everywhere in Moresby.  By killing enemies, completing missions and challenges, and finding new locales, experience can be earned which in turn, allows your character to level up and earn a skill point that can go to one of three skill trees. 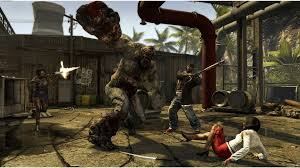 As one can tell, the gameplay follows the same set-up of Dead Island almost word-for-word, though it means the combat is as fun as ever, the problem is that outside of a couple of additions, it's basically the same game, complete with many of the same design problems the first one had.  For starters, a majority of the tasks are fetch quests that involve collecting a certain number of items for someone or something, and though the rewards are beneficial, you'll often find yourself relying on the sprint button and vehicles in order to reach the required location as fast as possible.  Plus, many of the weapon and enemy types, and even blueprints for modified weapons, are rehashed too, which further adds to the feeling of Deja-vu.

Interspersed among these missions are segments where your main character and their allies have to hold off a certain number of the undead by creating defensive measures such as fences and mini-guns; once the particular amount of waves is defeated, the enemies will retreat.  Prior to the beginning of a defensive mission, you can increase the chance of your survivors' ability to hold their own by finding key components for them.  Even then, the zombies will still pose a problem because new types have been introduced, including screamers, whose shrieks can disorient your character, grenadiers, hazmat scientists that throw their guts like grenades, and infected who have a large, club-like lump encompassing their arm that they can use as a weapon. 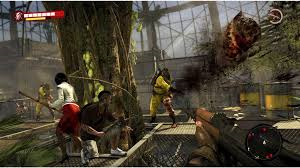 Dead Island Riptide, besides utilizing the same gameplay structure, also utilizes the same graphics engine, which is equally hit-and-miss.  Though the locales are beautiful and the zombies are grotesque, the humans you help are stiff mannequins lacking in emotion or variations in design, as many of them share the same outfits and body builds.  On the plus side, there aren't as many glitches as in the original, aside from the occasional bug including dead bodies getting stuck in the environment or the waypoint flickering on and off of the in-game map.  The voice acting is fairly poor, save for the growls of the infected, but the music, with its synth-heavy ambience, helps create an unsettling mood while traversing Palanai.

Dead Island Riptide is a polarizing game; since it is not a true follow-up but instead a stand-alone expansion, it means the core experience is the same as the first, and one's enjoyment will depend on whether or not they liked the first.  Although the combat is still entertaining, the title's repetitive nature, lack of improvements, and weak storytelling hold it back greatly, as does the game's conflicting tone.